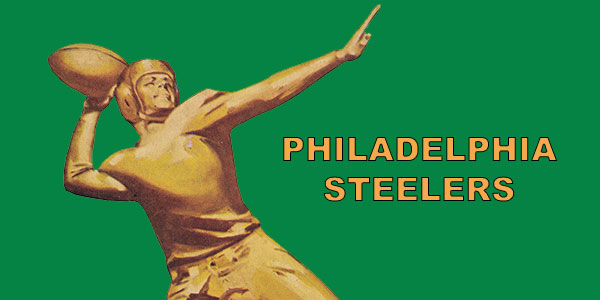 We all love our team, but what if the Steelers were not playing in Pittsburgh? What if they moved to Philadelphia? Would it stretch your loyalty?

In the first eight years of the Pittsburgh pro football franchise, their fans never witnessed a winning season. They saw one false dawn in 1936 when the team went 6-3, only to stumble and finish 6-6.

In 1940, Art Rooney changed the name of the franchise and the Pirates became the Steelers. The change brought no miracle turnaround in the team’s fortunes, they finished their first season as the Steelers at 2-7-2.

The Steelers were a bad football team, but the Philadelphia Eagles, who joined the NFL in the same year as the Steelers, were worse. The Eagles owner Bert Bell was also haemorrhaging money as he attempted to keep his team afloat.

On December 9, the Philadelphia Inquirer reported that Bell had revealed the consolidation of the Pittsburgh and Philadelphia teams was under consideration. The planned merger had to be presented to the other owners and ratified at their meeting that was under way.

Bell admitted, “I don’t know whether it will go through or if it does, just when, but we’re looking into all the angles and maybe do something before we leave.”

Dismissing the notion that the merger was to cut the two owners’ losses, Bell suggested, “Our chief objective is to get a stronger club, not greater financial backing.”

The owners approved the sale of the Steelers to Alexis Thompson for a fee reported to have been $150,000. Thompson had inherited a $6 million steel fortune and was eager to invest in pro football. It was rumored he wanted to put a team in Boston to replace the Redskins who had moved to Washington.

The NFL also authorised the sale of a half interest in the Eagles to Art Rooney, who used half of the money he received for the sale of the Steelers to pay for his share.

Thompson said a “mutual agreement” had been worked out to divide the players between the Pittsburgh and Philadelphia teams. He denied a report he planned to transfer the franchise to Boston. Carl Storck, the NFL’s president, confirmed the league’s approval was conditional on the Steelers remaining in Pittsburgh.

“I certainly hated to give up the franchise in the old home town,” Rooney told the Pittsburgh Post-Gazette at the time, “but it would have been poor business to refuse the proposition for a second-division ball club at the terms offered.”

“I made only $5,000 this year and it was a good year financially at home,” acknowledged Rooney. “I figured if that was the best I could do; I would have to do something about it. The war situation and conscription with regards to football players also had me worried.” His observation on the war proved to be prophetic in the next few years.

In its sports editorial, the Post-Gazette was appreciative that the Steel City was not going to lose its football team noting, “A great many fans will be sorry to see Rooney give up his local football connections, but some of the disappointment  will be assuaged if his giving up control does not spell out Pittsburgh’s disappearing off the professional football stage. Pittsburgh can ill afford to lose an amusement enterprise of such importance.”

Within a few days of the agreement, Art Rooney was having regrets and heard to lament, “Why am I leaving Pittsburgh, my hometown, to operate a football team in Philadelphia?”

Thompson renamed his Pittsburgh team, the Ironmen. He also proposed to set up his football organization in Pittsburgh by March 1941, but it was noticeable it didn’t happen. When Rooney then hinted to sports writers that he was ready to spring a good football yarn, Pittsburgh was prepared for another twist in the tale.

At the owners meeting in early April, Rooney announced, “Bell and I are going to bring the Eagles to Pittsburgh this fall.”

Bell issued a statement acknowledging, “the deal was consummated by mutual agreement, both parties feeling that they benefited.” Thompson, who was based in New York would benefit from owning a franchise nearer home while Rooney was happy he was remaining in Pittsburgh.

Bell would start the 1941 season as the Steelers coach, but after the team lost their first two games, he resigned. He stayed part of the Steelers organization until 1946 when he became the NFL’s commissioner and played an important part in guiding the league into the successful sports empire that it became.

It was Art Rooney’s devotion to his hometown that ensured the team we all love remained the Pittsburgh Steelers.