The Pittsburgh Steelers moved to 6-5 on the season with a 16-10 win over the Cincinnati Bengals yesterday. It was far from pretty as we told you would be the case. But, a win is a win and now the Cleveland Browns come in and I expect there to be fireworks early and often. Before we get to that however here are my thoughts on the win over Cincy.

–Mike Tomlin had no choice but to remove Mason Rudolph. He wasn’t just missing throws he was missing throws even when there was no pressure. The run game was decent but not as good as it should have been and Tomlin said, “The offense needed a spark.”

-Enter Devlin “Duck” Hodges. Do not get lost in the fact that Hodges first two throws added up yardage to more than Rudolph had already thrown for. While that was impressive, his overall numbers outside of those two throws were rather pedestrian. He ended up 5 of 11 for 118 yards and a 79-yard score to James Washington. Hodges also took two sacks as well. I’ll have thoughts on whether he starts against the Browns later this week but he provided the spark Tomlin needed and that’s all I can ask.

-Kudos to Benny Snell, Jr who returned from several weeks away to be the plow horse the Steelers needed. He carries 21 times for 98 yards and was vital to keeping pressure off of Hodges in terms of forcing him to make plays. Credit obviously goes to the offensive line here as well.

-Kerrith Whyte is an intriguing guy. I like his speed and I think the Steelers have to find ways to get him some touches.

-B.J. Finney, in my opinion, has always been a better guard than a center and at times that showed yesterday. If he can get us one more win before Maurkice Pouncey returns it would be tremendous.

-I think it’s more than fair to suggest Rudolph is struggling in part because of the events of last week. Not only was he smacked in the head with his own helmet but then he was accused of starting it, was called a ‘racist,’ and was fined $50,000. I think the pressure got to the young man and there’s nothing wrong with that.

-I think tight end has to be a top priority for the Steelers next year. While I admit, not having Ben Roethlisberger has hurt Vance McDonald he has to be more of a factor than he’s been. One catch on one target just isn’t going to get it done. Why Rudolph hasn’t used him more as a safety valve is a question I can’t answer.

-Two more Hodges-related things here. Would Rudolph have been able to make the read and the throw to James Washington on the touchdown? I have my doubts. Secondly, Hodges will learn that throwing the ball away isn’t always the best option. On third down late in the game he should have dropped to the ground forcing the clock to keep running. Instead he chucked it into the seats which in most situations is the right move.

-Devin Bush did exactly what you want a defender to do when he gets beat. He was beaten by Tyler Boyd on a route and immediately ripped at the ball from behind forcing it loose. Kudos to Minkah Fitzpatrick for scooping it up AND making sure he stayed in bounds when doing so.

-Bud Dupree is creating quite a serious problem for me. I was not a fan of keeping him around at $9.2 million but the former first rounder just keeps on playing lights out. His strip sack and recovery late in the game are further proof of just how much he’s elevated his game. That said, I’m not sure the Steelers would be able to afford him especially with T.J. Watt and JuJu Smith-Schuster due for big paydays.

-If tight end is a hidden possibility as a position of need on offense then I feel the same about Terrell Edmunds’ safety spot. He just doesn’t cover well one-on-one and his ball skills are pretty much non-existent.

-Cam Heyward tackles people with aggression on every play and it’s literally awesome to watch.

-T.J. Watt is having a Pro Bowl season as we all know but man… He has to make that tackle on Joe Mixon when he had him for a seven yard loss. Credit Mixon for breaking it and several others on the way to a positive gainer but that’s a theme with our defense at times. Too many tackles.

-The defense didn’t have any interceptions for the second straight game but getting those two fumble recoveries was just as important.

-The discussion this week will center on who Mike Tomlin starts at QB. The concern with Rudy is that he typically starts games poorly and considering the atmosphere next week with Cleveland coming in I have to wonder if Duck isn’t the best option.

-Deon Cain has a real chance to make some noise on this team. He had one reception for 35 yards but if he continues to pick up the offense he could be a real threat when needed.

-On paper, the Steelers remaining opponents don’t look too difficult. The problem is this though… The Browns are playing well. The Jets are playing well. Arizona will test the Steelers D. Buffalo is capable of winning the type of games the Steelers are forced into winning right now and then there’s of course Baltimore. There’s an awful lot of pressure on the this defense with the offense struggling like it is. Can they lead the Steelers to the postseason? We shall see. 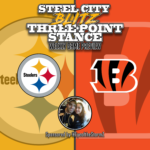 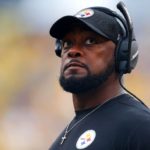