SCB Steelers’ Quick Hitters: The “Laughing All the Way” Edition

Yesterday the Pittsburgh Steelers began their OTAs and sadly yet unsurprising the focus was on Ben Roethlisberger and Mason Rudolph. The media was dying to see if Big Ben would actually speak to the rookie who was drafted in the third round back in April. This of course all stemmed from Roethlisberger’s radio comments after the Draft. And to no one’s surprise…. They got along just fine. I swear that Ben must get in his truck and laugh his rear end off all the way home. This was easily the most overblown story of the year so far and you could feel the disappointment in many media members who were dying for a continuation of this juicy story. I know exactly what Roethlisberger said on his radio show and when you actually take the time to listen to it you’d understand exactly what I’m talking about.

Le’Veon Bell did not report for OTAs.

We surmised some time ago that Bud Dupree very likely could flip sides of the defense and that appears to be the case through the first day. He spent his entire time over the left tackle. Granted it’s one day but it sure looks like they’ve done some tinkering during the offseason.

Tweet of the Day… So far so good for Conner.

Had to bounce back! pic.twitter.com/xSc1vRDr5f

Philadelphia released a guy I talked about on Monday in this space… Mychal Kendricks. My initial thought is that he’ll be too expensive for the Steelers but that doesn’t mean you don’t pick up the phone. His presence would immediately upgrade the linebacking corps. Word has it however he wants to stay in the NFC East but I can tell you this much… A phone call has been made from the 412 Area Code.

It is becoming more and more clear as to why the Steelers drafted Terrell Edmunds. As good as he is athletically, he’s been outstanding as a vocal leader already in the secondary. That is much, much needed.

Paul Worrilow and Hunter Henry both suffered ACL injuries costing them their seasons yesterday on the very first day of OTAs. Should these guys be wearing knee braces during OTAs and Training Camp in order to limit these injuries? I’ve seen plenty who say yes and plenty who say it doesn’t matter. Part of the reason guys (especially skill guys) don’t like to wear them is that they feel they take away from their speed and agility. This could cost them a starting position or playing time. I’m in no position to say which way is the right way. Guys have to do what they feel is best.

SCB Steelers’ Quick Hitters: The “Is That Really News?” Edition 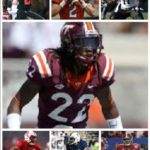