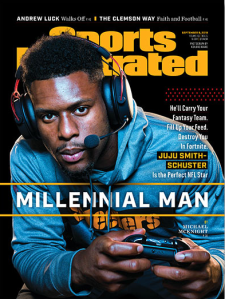 If you weren’t sure that JuJu Smith-Schuster has become one of the most recognizable players in the entire NFL then I can pretty much tell you he is. Sports Illustrated has him on the cover this week and a story about him. You’ll notice that JuJu isn’t in his uniform and isn’t carrying a football or his helmet. He’s wearing a headset and is using a video game controller. This my Steelers’ friends is the new normal.
I would be lying if I said I wasn’t concerned about JuJu. As the old saying goes “we’ve seen this movie before.” Young receiver comes in… Works his tail off and keeps his head down… Is barely an after-thought for most people around the league… Starts to get more playing time… Makes some big plays… Has creative end zone celebrations… Endears himself to the entire Steeler Nation… Gets a big contract… Some issues arise… Gets another contract and he turns into a completely self-obsessed moron. I truly believe JuJu is different. He appears to have a handle on the fame and the expectations. He continues to do the right thing in almost every situation and he ignores those that try to tear him down in an effort to enhance their own miserable lives. Eventually the big contract is going to come and I can’t tell you how or if that will affect him. I’m choosing to enjoy him and the ride he’s taken all of us right now and I’m going to hope it continues this season and well beyond. He’s that special in terms of being a player and a person.

Tweet of the Day… I can relate to this.

When you wake up and realize that football is finally back!! pic.twitter.com/M3l4UGZmyl

Latest on the Injuries

One of the plays that the Steelers and Jaylen Samuels had massive success with last season was the counter. For whatever reason, the Patriots could not stop the play regardless of how often the Steelers ran it. Sunday night, I expect the Steelers to use it again but they’ll need to do it out of some formations they didn’t use in last year’s game. Bill Belichick will no doubt be prepared for it so Randy Fichtner has to change things up to for a counter from The Hoodie.

Honest Take About the Opener

As most of you know the defending Super Bowl Champion typically opens the season at home Thursday night. The NFL claimed when they decided to break that tradition that having the league’s oldest rivalry (Green Bay at Chicago) kick off the 100th season made sense. Make no mistake about the fact that this was a convenient excuse for Roger Goodell and the NFL. The last thing they wanted was to open their centennial season by having to deal with Robert Kraft’s legal issues. There will still be some minor mention of them on Sunday night but the NFL could not have such a big and embarrassing mess trump their season-opening celebration. 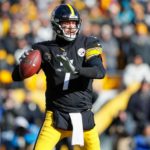