Can you imagine if the Pittsburgh Steelers got off to a hot start tonight? Maybe instead of falling behind 7-0 or 14-0 they could actually build a lead of seven or ten points??? The slow starts have been a season-long trend and they need to put this trend to bed tonight. First Energy Stadium will be rocking. Cleveland fans know this game is ‘make or break.’ A loss buries their postseason hopes. A win ends a four-game winning streak for their rivals and gives them a life-line on a playoff berth going forward. This is exactly why the Steelers could really, really use a positive start tonight. Get the crowd out of the game early. No one is more used to that feeling than Browns’ fans right? It doesn’t require big plays – in fact it may need just a nice long drive that ends in touchdown. A bad start is not a death knell, we know this based on past games, but another poor start on the road is not advised and no one knows that more than the Steelers.

I try to always publish my pregame preview a day or two ahead of the game and did so again yesterday. Everything you need to know about the Steelers and the Browns is in the Three-Point Stance presented by Eye of the StormZ.

Tweet of the Day… I think many of you will find this interesting.

During our conversation with @Ike_SwagginU he wanted to clear up a few things regarding @TimTebow and that 2011 AFC Wild Card play..#PatMcAfeeShowLIVE pic.twitter.com/PF13tZXNXX

The idea that the NFL is setting up a special showcase for Colin Kaepernick as a ‘publicity stunt’ as Eric Reid has suggested doesn’t make sense to me. The NFL is on fire right now so why would they want to purposefully throw water on that by bringing a very ugly time in the league back to the forefront? Could Kaepernick help a team right now? Well, ask the Bears or maybe the Broncos. I think he could definitely help because he’s proven he can be successful. The problem however is two-fold. One, he wasn’t exactly playing well when all of this started three years ago. Secondly, what team is going to want to deal with their own fan base who more than likely isn’t happy about the signing? My guess is this will end up being much ado about nothing. Kaepernick will not be signed and eventually he will age out of the league. That doesn’t answer “why” this is happening but I’m not really sure anyone knows that either.

Hard to believe we are already at this point in the season but voting for the Pro Bowl is now available. The Steelers, in my opinion, have several guys worth voting for especially on the defensive side of the bowl. You can vote by clicking on this link. 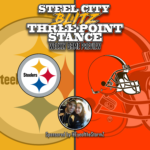