On Tuesday, the assembled media gathered for Mike Tomlin’s press conference. One question eventually came about Antonio Brown’s recent Twitter threat against an ESPN journalist. Tomlin was clearly annoyed… “Guys, don’t ask me about social media. I don’t have time for that stuff,” he said. I’ve gone back and forth about how I feel about his response. First of all, the media is more than within its’ rights to ask. Back in Training Camp, Brown tweeted that Steelers’ Beat Writer Ed Bouchette was a “clown” because Bouchette tweeted an observation about Brown limping. I also understand Tomlin’s viewpoint; he has far more important things to deal with but this is the new age as I detailed here. Brown, through a spokesperson, issued an apology to the writer. I have no doubt in my mind that Brown was forced to do this by Tomlin or someone else in the organization. Brown is a terrific personality, a tremendously hard worker and a massively important part of this team but he makes mistakes too. I think both Tomlin and Brown could have handled this better but it is what it is now.

Today is a big day for Steelers’ tight end Vance McDonald. As was the case last Thursday, he was a full participant in practice the day before only to be downgraded the rest of the week until finally he was inactive. Jesse James as usual did his very best in McDonald’s stead but McDonald being healthy really does add another weapon to the arsenal of Ben Roethlisberger. Here’s hoping he can finally play this week.

Tweet of the Day… Ravens at Bengals tonight. Food for thought.

Ravens in Cincinnati tonight, a spot where Baltimore QB Joe Flacco has struggled. In 9 career starts at Paul Brown Stadium, Flacco has gone 3-6 with a 34.7 QBR. He’s 6-4 with a 43.9 total QBR at home vs the Bengals.

Rookie Terrell Edmunds played 83% of the snaps on defense Sunday. That’s an indicator of where they think he is in terms of the defense. Only Artie Burns (99%) and Sean Davis (100%) saw more time in the secondary than he did.

Rookie James Washington meanwhile saw just 11 snaps on offense. I’m told this is likely to several reasons. One, he did have a full week of practice prior but had been nursing a leg injury. Second, his grasp of the playbook may not have been where it needed to be. Lastly and perhaps most important, was Ben Roethlisberger as comfortable with him as he needed to be heading into a game? Whatever the reason, I see his snaps increasing each week.

Steelers’ Special Teams’ Coach Danny Smith has never been one to just settle for punting the ball out of bounds to eliminate the possibility for a big return. He usually wants his punter to kick into the boundary and use it as an extra defender. This isn’t a horrible plan, especially when you have a punter who can be as accurate as needed. Whether Jordan Berry fits that category I can’t say with 100% conviction. He’s quite good at pinning teams inside the 20 but can he routinely place the ball where needed? Stay tuned on this as the game unfolds. 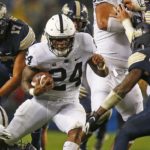 Why the Pitt-Penn State Rivalry Games are Ending