First let me thank everyone for the birthday wishes over the weekend. Social Media is often a really ugly place but it can be pretty cool too. So again, thank you all!

Late last week, James Harrison became public enemy #2 when he commented on Le’Veon Bell’s Instagram post. You recall that right? The one where he made himself into public enemy #1 when he said “it’s hard to be the hero in a city where they see you as the villain.” Deebo responded to the post by saying “Welcome to the City” (smiley face emoji). My how soon Harrison has forgotten… Remember the Steelers’ fans who stood by Harrison during his domestic assault situation? Or how about those that stood by him the entire way as Roger Goodell waged war seemingly against him and him alone? Harrison clearly doesn’t understand the difference between where Bell has put himself and where Deebo put himself after signing with New England. Did he really think Steelers’ fans would just turn a blind eye to his decision? Harrison is likely headed for a rough post-career life. He’s a like a soldier who needs war to thrive. What will he do without the game? I’d recommend some memory games for starters.

The only scenario in which the Steelers take a quarterback in the first round of the draft is one in which Sam Darnold, Josh Allen, Josh Rosen or Baker Mayfield fell to them. I do not believe this will happen and even if it did I would have a hard time swallowing it. We’ve seen situations like this before though most notably with Aaron Rodgers.

Tweet of the Day… Heading out to Opening Day at PNC???

In case you missed it, Sean Davis will be wearing number 21 in 2018 as an ode to the late Sean Taylor. That number became available when Joe Haden switched over to number 23 which had been vacated by the departure of Mike Mitchell.

Martavis Bryant participated in a celebrity flag football game hosted by Julio Jones yesterday. Other NFL’ers included Brandon LaFell, Ezekiel Elliott and Josh Norman. There were a number of rappers there and to be really honest, I don’t think I’d heard of too many of them.

Mock Draft Update: Based on what I’ve seen in recent days, most have Alabama’s Rashaan Evans or Boise State’s Leighton Vander Esch going to the Steelers at 28. I’ll have more on what mock drafts really mean this week. 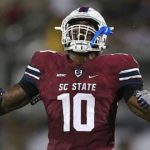