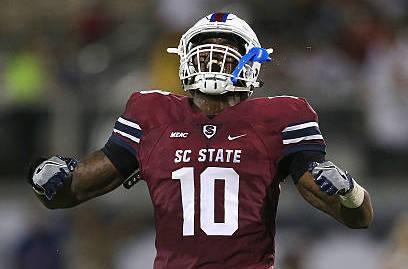 Every Pittsburgh Steelers fan knows the team is in desperate need of a dynamic linebacker to step in after losing Ryan Shazier to a tragic injury. The team signed Jon Bostic in free agency, but he is assumed to be a stopgap player until a rookie linebacker is ready to step in and contribute. Today, we profile Darius Leonard, an under the radar linebacker prospect.

Background: 2016 Mid-Eastern Conference Player of the Year. According to ‘The Undefeated’ Leonard went into South Carolina State University at 180lbs and is now around 230lbs. Accepted invitation to play in the 2018 Senior Bowl.

What’s to like: Excellent size for the ‘mack’ linebacker position. Athletic on the field, uses burst to stride to the ball carrier. Long limbs help him get off blocks. Possesses good lateral agility and ability to move sideline to sideline with fluidity. Keeps position and responsibilities, doesn’t overflow on fakes or misdirection. Gets sufficient depth in coverage. Sifts and works through traffic well to get to the ball. Was tasked to spy the quarterback for mobile quarterbacks. Decent diagnosing skills and a high football IQ.

Concerns: 40 yard dash time and game tape speed didn’t match up. Can be fooled against play action easily, leaving the middle of the field open. Concerns about his functional strength at the next level, worries about getting overpowered often by offensive linemen. Doesn’t have much power in his hits. Will need to add some bulk to his frame to supplement some physicality.

Verdict: A long, rangy linebacker who can blitz and cover well. His FCS level of competition shouldn’t drop his stock too much, but it is evident that the transition into the NFL will have much more to do with his physicality than his intangibles. He can be a tackling machine as a starter at the NFL level but his explosiveness and splash play ability leave a lot to be desired. Really want to see some relentless, nasty demeanor added to his game. With some good coaching and help with retaining weight/muscle to his frame, Leonard can shape up to be a steal. He would be a welcomed edition by the Steelers as a day two selection. The Steelers sent scout Mike Butler to Leonard’s Pro Day.