SCB Steelers’ Quick Hitters: The “Bell to the Shelf” Edition

Unlike last year at this time, General Manager Kevin Colbert stated yesterday that the team was going to halt talks with Le’Veon Bell and his agent. The focus of the team is instead on the Draft and free agency. I’m curious to see what Bell has to say because you just know he’ll comment on social media before too long. Better yet, can you imagine if the Steelers took a running back early in the draft? Regardless, this is an interesting ploy by Colbert. Last year there was no such pronouncement. This statement by Colbert then created a Twitter spat of sorts between local guys Dale Lolley and Mark Kaboly against CBS journalist Will Brinson. I’ll let you judge for yourself. Just click the link.

Since you asked, I had Kansas and Villanova correct. Had Michigan losing in Elite in 8 and had Loyola, well… Not in the Final Four that’s for sure.

Tweet of the Day… OK, this isn’t going to make Ian very happy but…

I'm sure America weeps for Grayson Allen missing clutch shots at the end.

If you want any franchise in the NFL that is similar to the Steelers it’s the Giants. From the time they started to the family ties, the organizations are often tied together. The G-Men are currently dealing with Odell Beckham Jr. who is demanding a contract extension. If you listen to some of the comments from the NYG ownership, they aren’t too far off from the way the Steelers do things.

The newly proposed “catch-rule” would have made Jesse James’ ‘non-catch’ a “catch” in the game against New England last season. The fact that we even need to have discussions over what a catch is leaves me angry and wishing for instant replay to have never come about. It’s ruined the game.

Personally, I do not see why the fifth-year option for Bud Dupree is such a difficult topic of conversation. He has significantly under-whelmed as a first round pick. I do not give him his option. Period. End of report.

Cnic points out three very good points about the situation with Bell and the possibility of drafting a running back. 1. Bell is gone after the 2018 season. 2. This year’s draft is very well-stocked with RB talent and 3. Next year’s RB class is going to be below average. While I have to give James Conner more time, I’ll always believe they reached on him. The Steelers do not want to be caught without a good running back in 2019. 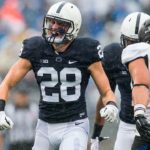