Head Coach Mike Tomlin completed his weekly press conference and here are a few nuggets…. “Jarvis Jones played well. He’s a guy we’ve identified that can play both sides at linebacker”… Both Markus Wheaton and Cody Wallace appear to be ready to go this week… Fullback Roosevelt Nix however looks to be out another week but wouldn’t go that far yet… On DeAngelo Williams, “He came here with one agenda. To win a championship.” “No such thing as an ugly win only ugly aspects.”

Tomlin also had praise for punter Jordan Berry who nailed five of his eight punts inside the 20 yard line. He also mentioned Sammie Coates’ two big plays that “flipped the field” for the Steelers.

The Steelers have not won in Philadelphia since 1965. That’s a run of 0-8 over that span.

After watching the Eagles last night, I really think this is what the Steelers will do defensively against rookie QB Carson Wentz.

Jesse James has yet to miss a snap on offense through two games. That’s a total of 142 if you’re keeping score at home.

I hope you’ve all been able to pull yourselves away from “Brangelina” coverage to read this… Thanks.

Carson Wentz is the real deal…

After two weeks, the oldest running back in the league, DeAngelo Williams leads the NFL in rushing. He’s also tied for the league lead in scoring among non-kickers with 18 points. Ryan Shazier leads the team in combined tackles with 17 and he has an interception as well.

#Nailthenumber returns tomorrow!! No winners after two weeks so the pot grows to $1,200!!

Although the defense struggled to cover the middle and seam routes Sunday, I thought the secondary looked better. Rob Golden has improved and Artie Burns got more time which is always good in my opinion. Mike Mitchell has to be more careful however. He could have easily been flagged for some questionable hits. I like the aggressiveness but he needs to be smarter. 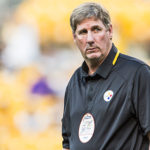