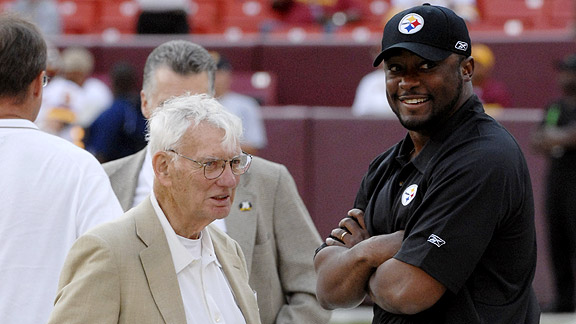 Today is the 84th birthday for Mr. Dan Rooney. While the face of the franchise will always be his father, Art, it would be completely wrong to take Mr. Rooney out of the equation. He was one of the architects of the four Super Bowl-winning teams of the 1970’s and that can’t be overlooked. Any time you take the reins of something as large as the Steelers, people will also be unhappy with some of your decisions and Mr. Rooney is no different. By and large however, he has been a positive force that often goes forgotten especially by younger fans.

In case you missed Steelers’ Head Coach Mike Tomlin on ESPN’s ‘Mike and Mike’ this morning here it is.

Make sure you check out our new ‘Fantasy Football’ category. Cnic has his first piece up for those getting ready for their draft.

Mark Kaboly of the Trib says DeAngelo Williams has no sympathy for the Patriots.

Tweet of the Day…  Ike has always had a great relationship with Mr. Rooney.

I don’t advocate for other blogs very often as that’s kind of like supporting the enemy so to speak but two guys to check out are Steel City Underground and Steelers Grind. They do good, authentic work.

Cowboys’ rookie Ezekial Elliott’s jersey leads in all jerseys sold since the draft. I think he has tremendous upside and could be an outstanding back but I’m curious as to the type of people buying his jersey. Is it because there are so many Cowboys’ fans? Are there lots of Buckeye fans buying it? Who knows? Just found it odd a rookie was leading this category.

I’m really starting to get to the point where I feel bad for Johnny Manziel. I think the kid is incredibly screwed up, has no support system and cannot think for himself. It won’t end well.

The Steelers report to camp in NINE days!!!! 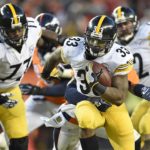