So how about that Convention last night huh? Ya, it’s all pointless to me too.

Great stuff from our Ben Anderson on Le’Veon Bell. It’s a different point of view which I always appreciate.

Here’s the debut for Chris Nicolaou who will be writing weekly Fantasy Football articles for us as well as some other things Steeler-related.

In their never-ending quest to make the game more controversial than ever, the NFL will be installing micro chips in footballs. They’ll be monitoring the clearance of field goals and extra points in an effort to decide whether the uprights should be narrowed. How about worrying more about getting calls right or maybe deciding what a catch is?

Tweet of the Day… Wonder if the Steelers knew how great DWill was going to be off the field?

The men in black (and yellow) pic.twitter.com/tiqx9T06fX

For those of you who are relatively ‘new’ Steelers’ fans, steelers.com is doing a really cool series on former players and their memories of Training Camp.

Lot of talk about the Steelers being Super Bowl favorites with Brady missing the first four games of the season. In order for that to happen the secondary has to be better than expected and injuries cannot happen on offense. It’s that simple to me. 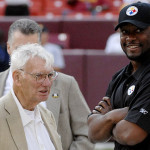