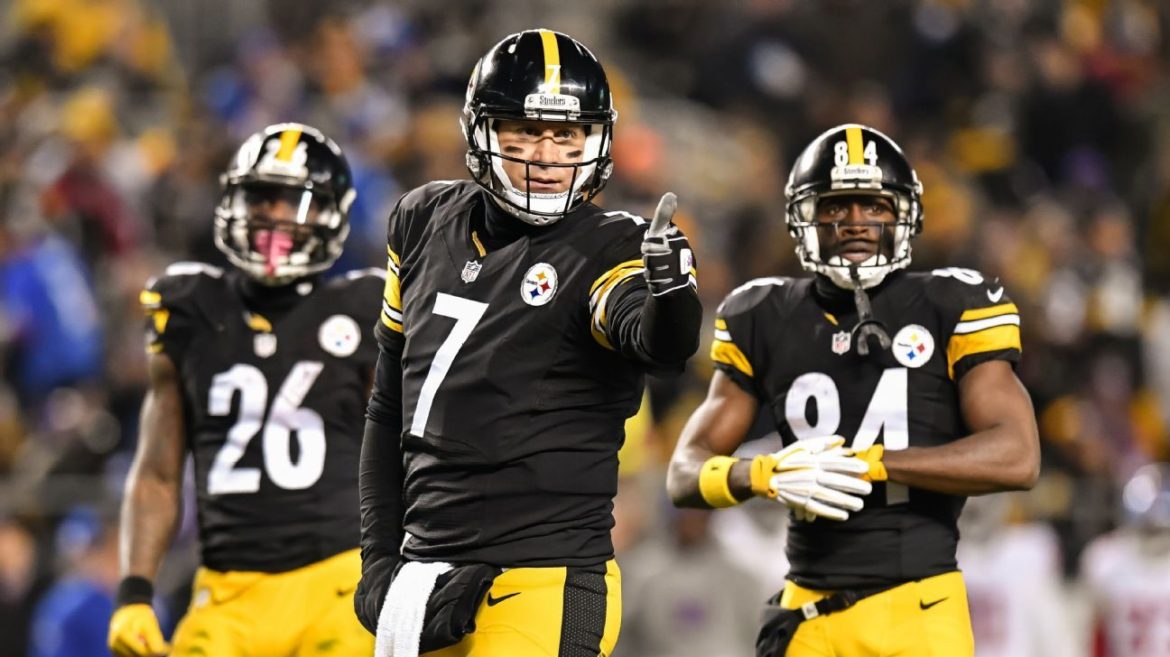 With two weeks until the Steelers head to Latrobe for Training Camp, we took a look through the Steelers all-time record books to see where the current players stand. As we all know, Ben Roethlisberger already owns essentially all of the Steelers quarterback records but can move up significantly in the league rankings. Hines Ward and Franco Harris’ receiving and rushing records remain safe for the time being, but both Antonio Brown and Le’Veon Bell can make some serious headway in moving up the charts. On the defensive side of the ball, James Harrison claimed the Steelers all-time sack record last season, surpassing both Jason Gildon’s official record and Mean Joe Greene’s unofficial record. While very few career records are reachable this season, many players have the opportunity to vault themselves up the standings. Additionally, single-season records are always in danger of falling, especially when you have players like Ben Roethlisberger, Le’Veon Bell, and Antonio Brown.

Ben Roethlisberger enters the 2017 season with 46,814 career passing yards. This puts him nearly 2,000 yards ahead of Terry Bradshaw’s previous team record and ranks him 10th all-time in the league. Ben should pass Fran Tarkenton for 9th place in the first game of the season as he needs just 190 yards to move up. If Ben is able to stay injury-free, he should pass Warren Moon (2,511 yards ahead) and has an outside chance to pass John Elway (4,661 yards ahead). Ben’s career high in yardage is 4,952 (in 2014) and he has broken the 4000-yard mark four times in his career. Barring injuries, Ben Roethlisberger and Eli Manning should become the 7th and 8th men in league history to surpass the 50,000-yard mark this season.

Ben is currently 10th in league history with 29 career Fourth Quarter Comebacks. He had 6 in both the 2004 and 2008 seasons but has not had more than 4 in any year since. Ben enters 2017 one behind Brett Favre, Eli Manning and Fran Tarkenton and just two behind Joe Montana. If he repeats his career high of 6 comebacks, he would draw even with his icon John Elway and enter the Top 5 all-time.

After just four seasons, Le’Veon Bell is fifth on the Steelers all-time rushing yards list with 4,045 yards. Bell should surpass John Henry Johnson (336 yards ahead) in the first month of the season. If Bell can stay healthy, he has a chance to pass Willie Parker for third on the list, but would need to run for 1,334 yards this season. Bell’s career high is 1,361 yards in 2014 which is the only season he played in all 16 games. Interestingly enough, Bell currently has a higher yards per game (86.1 to 68.1) and yards per attempt (4.5 to 4.3) than “Fast Willie” Parker.

Bell, John Henry Johnson, and Barry Foster are currently tied for 6th on the Steelers all-time list with 26 scores. Bell’s next rushing touchdown will give him the spot all to himself. Rashard Mendenhall currently holds the 5th position but is just 3 TDs ahead of Bell. After Mendenhall, quarterbacks sit in the next two spots with Terry Bradshaw (32 TDs) and Kordell Stewart (35 TDs). Bell has scored at least 7 TDs in every season he has appeared in at least 12 games and with a healthy season could find himself third on this list as well.

Antonio Brown enters 2017 fresh off a 4-year contract extension that carries him through 2021. Assuming he stays healthy, he will absolutely surpass Hines Ward’s career marks within that contract. Brown currently has 8,377 yards which is good for third on the Steelers all-time list, just 346 yards behind John Stallworth for second. He is over 3,700 yards behind Ward which is unreachable in 2017 but with a good year he could set himself up to become the team leader in 2018. Brown needs 1,623 yards (a number he has surpassed in 2 of the last 3 seasons) to become the 46th player in NFL history to break the 10,000-yard mark.

Le’Veon Bell has accounted for 2,005 receiving yards in his career. If Bell’s ability in the passing game continues on his current pace, he should surpass Lynn Chandnois, Merril Hoge, Franco Harris, and Val Jansante to have the second-most receiving yards among running backs in Steelers history. Bell needs just 346 yards to reach that spot but remains well behind Ray Mathews’ 3,919 from the Wing-T offense days of the 1950s.

Yet another list that could see Antonio Brown’s name directly behind Hines Ward at the end of the season. Ward’s 85 career touchdowns are untouchable this season (Brown enters with 50), but if Brown ties his career high of 13 TDs in a season he would draw even with John Stallworth in second place. Brown needs just two touchdowns to surpass Lynn Swann in third place which should be easily done as he has scored at least 10 TDs in each of the last three seasons.

Martavis Bryant is a big unknown this season, but he has 14 career touchdowns in just 21 games. If he can play a full season that pace equates to 10-11 TDs over 16 games which would be enough to vault him ahead of Santonio Holmes, Yancey Thigpen and Plaxico Burress into the Top 15 on the Steelers all-time list.

Will this finally be the season someone takes the Punt Returner job away from Antonio Brown? For the sake of AB’s health, we can only hope so but if not Brown has an outside chance to surpass Rod Woodson as the team’s best punt returner. Brown needs 665 return yards to pass Woodson and is currently tied with Antwaan Randle El with 4 career punt return TDs, the most in team history.

William Gay earned the moniker of “Mr Pick-Six” in 2014 when he returned all 3 of his interceptions for touchdowns. Gay is currently tied with Rod Woodson with 5 career Pick-Sixes as a Pittsburgh Steeler. One more would give thim the team record.

James Harrison broke the team sack record last season and has his eyes on another mark this year – the team fumble record. Greg Lloyd forced 34 fumbles during his Steelers tenure and Harrison is hot on his heels with 33 forced fumbles. Harrison has forced 2 fumbles in each of the last two seasons and would take the title from Lloyd if he does it again.

I see you don’t monetize your website, don’t waste your traffic, you can earn additional cash every month because you’ve got high quality content.
If you want to know how to make extra $$$, search for: best adsense alternative Wrastain’s tools