It’s become a rite of passage for me and I really don’t know why. I suppose it’s the dork in me that harkens back to days when I used make my own Preseason NCAA Top 20 (yes, it actually was top 20, not like the 25 we have now). For whatever rhyme or reason I enjoy predicting the Steelers’ schedule. I typically get a couple correct and one or two primetime games as well but that’s about it. I guess that’s why this is a prediction. Anyway, on to my crystal ball!

Week One: Cleveland. For the first time in forever the Steelers actually get to open at home and why not let the festivities begin! Hello Myles Garrett!

Week Two: @Tennessee. The Titans were darn close to a Super Bowl berth last year until Patrick Mahomes woke up.

Week Three: @Jacksonville. The Jags were adamant about keeping this one on Florida rather than London. Can’t imagine why…. (A-Hem! SteelerNation travels well).

#Week Seven: Houston. I hear the Watt Family will be hosting a game of tag starting in front of Primanti’s.

Week Nine: Cincinnati. Joe Burrow, if he is still healthy, makes his first trip to the Steel City.

#Week Ten: @Baltimore. The rivals don’t meet until after mid-season and after not meeting in Primetime a year ago that trend comes to an end.

Week Eleven: Denver. The Broncos and all that new speed come the Burgh for a late afternoon kickoff.

Week Twelve: Washington. The Redskins arrive and I have one question. Who will be playing QB for them?

+Week Thirteen: @Dallas. The Steelers head to Big D for a turkey day showdown with the Cowboys in Jerry World.

Week Fourteen: @Buffalo. The Steelers come off a mini-bye to play the Bills in a huge game with AFC postseason ramifications.

Week Sixteen: Baltimore. The first of two divisional games to end the season.

Week Seventeen: @Cleveland. The finale comes along the shores of Lake Erie. It’s not still burning is it? 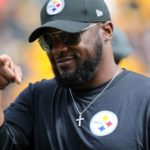