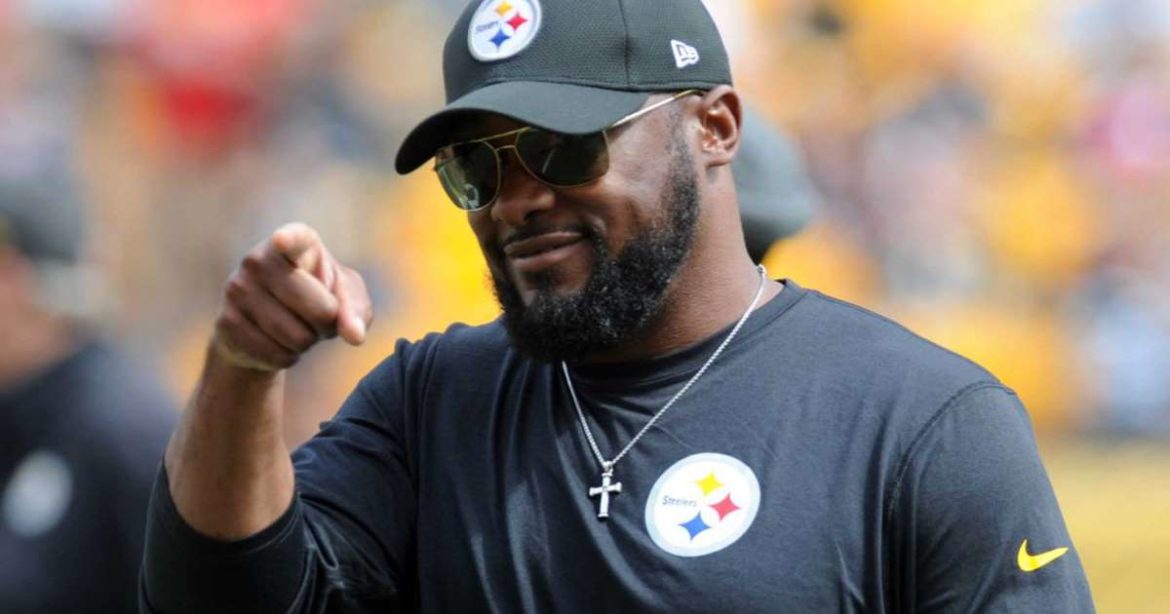 Don Shula, legendary coach of the Baltimore Colts and Miami Dolphins, passed away this week. Shula holds the NFL record for most wins by a head coach with 328 in his 33 seasons. Incredibly, Shula only had two losing seasons during that career. In his penultimate season of 1994, Shula passed George Halas’ 318 career victories. Shula and Halas are the only coaches in NFL history to surpass the 300-win threshold. Beyond them, only 6 other coaches have even passed the 200-win mark: Bill Belichick (273), Tom Landry (250), Curly Lambeau (226), Paul Brown (213), Andy Reid (207), and Marty Schottenheimer (200). There are multiple factors to consider when determining if any active coaches could surpass Shula’s record – current wins, winning percentage, and age. I broke down the data on which active coach has the best chance to surpass Shula’s mark.

Belichick is the wins leader among active coaches at 273 victories in his 25 years of coaching while Andy Reid just surpassed the 200-win mark this past season, his 21st in the league. Among other active coaches, Mike Tomlin and Pete Carroll are next, tied at 133. Sean Payton is fifth at 131. Mike McCarthy, now back in the league after being hired by Dallas, has 125 wins. John Harbaugh (118 wins) and Jon Gruden (106 wins) are the only other active coaches with 100 victories. Interestingly, the 32 current coaches can be broken into 4 even tiers of coaches with 100+ wins, with 31-99 wins, with 10-30 wins, and with fewer than 10 wins.

The active coach with the highest winning percentage is currently Green Bay’s Matt LaFleur. However, there is a small sample size here as LaFleur went 13-3 in his first (and only) season as a head coach. This 81.3% winning percentage will be nearly impossible to maintain over a career, but for purposes of this exercise we will use it. Second on the list is Sean McVay, whose 68.8% winning percentage edges Belichick’s 68.3%. For his career, Shula won 67.6% of his games. Other high-volume winners include Mike Tomlin (64.2%), Sean Payton (63.0%), and Matt Nagy (62.5%). Nine head coaches have winning percentages above 60% and 21 of the 32 are above 50%.

The average age of head coaches in the NFL in 2020 will be just under 51 years old. Pete Carroll (69 years old) is the oldest followed by Bill Belichick and Bruce Arians (68 years old). Mike Zimmer, Andy Reid, and Vic Fangio are the only other coaches over 60. On the flip side, Sean McVay (34 years old), Zac Taylor (36 years old), and Brian Flores (38 years old) are the youngest coaches in the league. New hires Kevin Stefanski (Cleveland) and Joe Judge (NY Giants) are both 37 and will be taking on their first head coaching gigs.

Shula’s record of 328 victories is cumulative over his time in Baltimore and Miami. The closest coach to that record is Bill Belichick, just 55 wins shy. At his current pace of a 68.3% winning percentage, it would take Belichick 81 games to catch Shula. Given that the NFL is moving to a 17-game schedule in 2021 with the new CBA, 81 regular season games would mean 5 more years of coaching for Belichick. Considering he will be 68 years old in the fall of 2020, Belichick would have to coach until he is 72 to catch Shula. That is entirely possible, though if the team takes a nose dive without Tom Brady at the helm, his pace will slow and he may not coach that long. If he keeps coaching and maintains his career winning percentage, Belichick would catch Shula during the 2024 NFL season.

With no other active NFL coach within 100 wins of Shula, and their winning percentages all requiring over 10 years of continued success to reach the threshold, age becomes an important factor. Andy Reid, who ranks second in wins among active coaches (207), needs 121 wins to catch Shula. At his career 61.8% winning percentage that would take 12 seasons and make Reid 73 years old. The good news for Reid, unlike Belichick is that he has a young quarterback who is ascending to the top of his game and will give him the opportunity to stack a lot of wins in a short amount of time over the next few seasons.

Among the other 27 coaches, all but 4 would be over age 75 when they would come close to Shula’s record, based on their current winning percentages. Chicago’s Matt Nagy, who has gone 20-12 (62.5%) in his two seasons, would need 30 more years of identical success to surpass Shula, and would be 71 years old at the time. Green Bay’s Matt LaFleur, whose small sample size of just one season makes him the active leader in winning percentage, would need 23 more years averaging a 13-3 season to catch Shula and would be 63 years old. Sean McVay is the youngest coach in the league at just 34 years old and if he keeps up his Belichick-esque 68.8% winning percentage could surpass Shula in just 26 years when he is 59 years old. But 26 years is a long time for an organization to stay with a coach and for a coach to maintain that historic level of success. 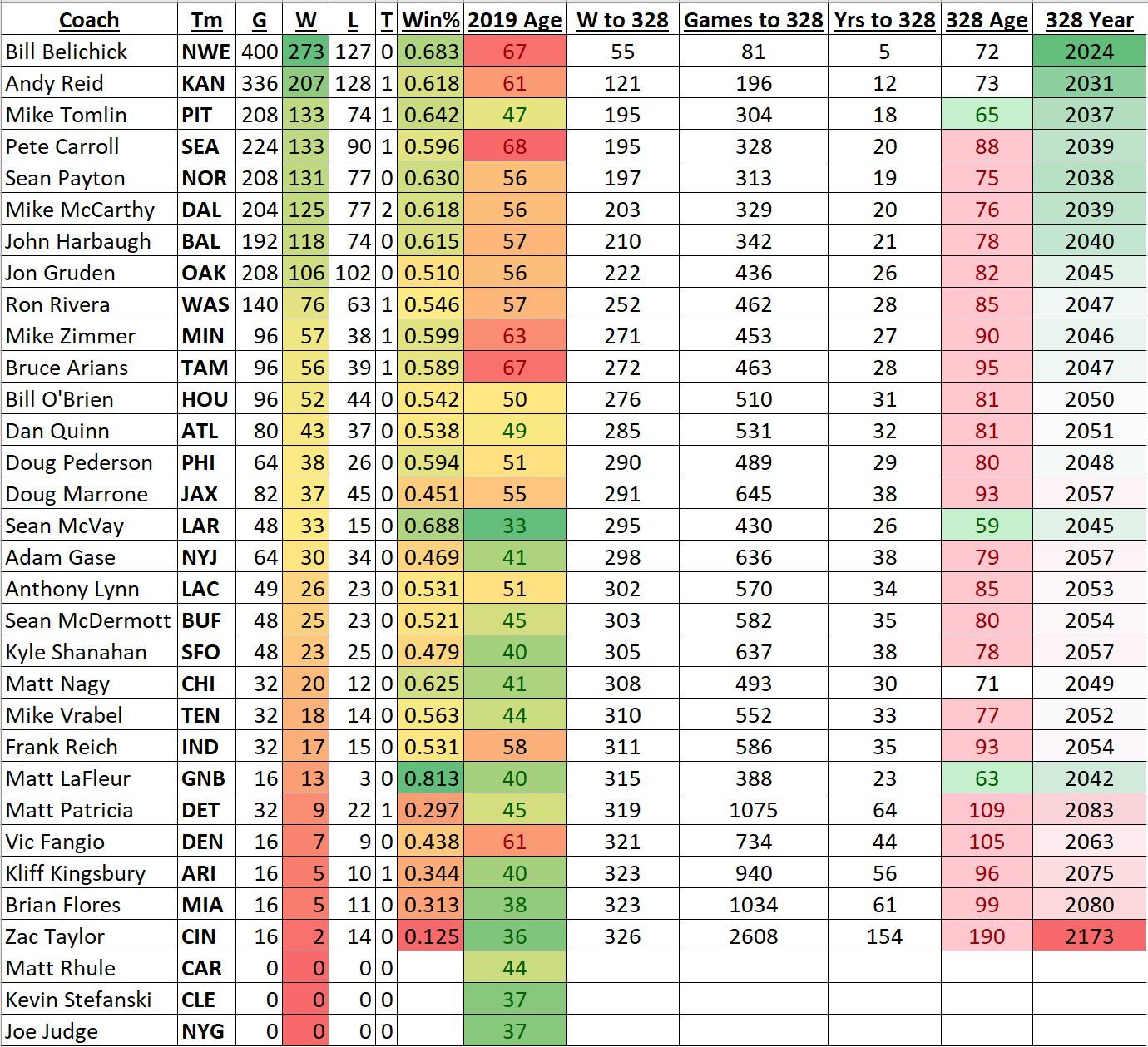 Other than Bill Belichick, there is one NFL head coach who checks all of the potential boxes – career wins, winning percentage, and age. On top of that, he coaches for an organization that does not change head coaches until the coach is ready to retire. Obviously, that is Pittsburgh Steelers coach Mike Tomlin.

Tomlin already has 13 seasons under his belt and is third in wins among active coaches with 133. While Shula had just 2 losing seasons in 33 years, Tomlin has never had one in his 13 years. Even last year with multiple injuries to quarterbacks, running backs, and receivers, Tomlin still managed an 8-8 campaign. At his current 64.2% winning percentage, Tomlin would need 304 games to amass the 195 wins he needs to catch Shula. Mike Tomlin will be 48 years old during the 2020 NFL season, and it would take him 18 years to coach those 304 games (assuming the league stays with a 17-game slate for the entire time after 2021). Tomlin would be just 65 years old in 2037 when he would coach that 304th game. Interestingly, Shula was also 65 years old in 1995 when he won his 328th and final game.

Could Mike Tomlin retire as the winningest coach in NFL History? That is certainly a mathematical possibility. The first factor is how long Bill Belicheck chooses to continue coaching. The second factor is finding another quarterback to sustain success after Ben Roethlisberger retires. That said, Tomlin coaches for one of the most stable organizations in the league from an ownership and leadership standpoint. He is a proven winner and one of just 4 active coaches with multiple Super Bowl appearances. Among Steelers coaches, Tomlin is just 16 wins shy of Bill Cowher’s 149 and 60 wins shy of Chuck Noll. With the move to a 17-game schedule in 2021, it is possible that Tomlin surpasses Noll’s total within the next 6 seasons and can set his sights on the NFL record.

SCB Steelers Quick Hitters: The “Not This Again” Edition

Arians Opens Up on His Removal From...

I want some of what your smoking kiss ass