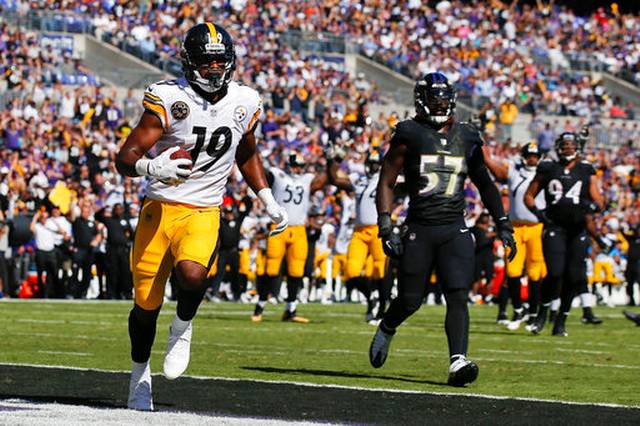 The offense of the Pittsburgh Steelers reminds me of a vehicle slowly making its way through heavy mud. It gains some traction and lurches forward at times but overall spends a lot of time spinning its’ wheels. Regardless, the Steelers survived a tumultuous week off the field and beat the Baltimore Ravens 26-9 to move to 3-1.

While I’m not ready to say Le’Veon Bell looks like Le’Veon Bell yet he clearly looks a lot better than the previous three games. Bell ran 35 times for 144 yards and two scores and while those numbers suggest he’s better than ever I’m not going there yet. You will however get no argument from me that he was the difference today along with some improved blocking as well.

The defense was the story for much of the day however. Whether it was Cam Heyward, Mike Hilton or Ryan Shazier, the Steelers harassed Joe Flacco sacking him four times and they picked him off twice as well. Heyward recorded two sacks, forced a fumble and recovered it as well. Hilton was our defensive player of the game with four tackles, a sack and an interception. His blitzing off the edge was a major part of the story.

Shazier was just a missile all afternoon. He led the team with 11 tackles including one for loss and three passes defended.

There are and will continue to be questions about Ben Roethlisberger. He had another very average performance going 18 of 30 for 216 yards with one touchdown and one very questionable interception that most are still scratching their heads over. I may sense some of the things others do but the fact that he played better on the road than in recent games in Baltimore may be a positive.

JuJu Smith-Schuster recorded a touchdown pass and grabbed a few other key receptions as well. His ascension is why Eli Rogers didn’t even get a helmet today and don’t be surprised if that continues.

There will be many narratives about Antonio Brown’s sideline tantrum after Roethlisberger missed him breaking open in the secondary. Let me give you mine. AB is the best in the business and he always wants to put up numbers. Was he putting his own stats ahead of team success? That argument can certainly be made but I’ll give him the benefit of the doubt today. He was frustrated plain and simple.

Today was about the running of Le’Veon Bell and the overall solid play of the defense. We can certainly complain about many things because after all this is what Steelers’ fans typically do. With the offense still struggling, 3-1 and atop the division isn’t so bad but then again we always have higher expectations don’t we?

Ben is off plain and simple, he still ain’t putting it the kiddie pool. Tons of potential here, it’s early in the season and things could very easily fall our way. You think A B was mad any QB makes that throw to Bryant. I stand by my post earlier Ben really doesn’t throw a good deep ball.

Ben has always been streaky with the deep ball. I think it will come around… AB was being a diva plain and simple.