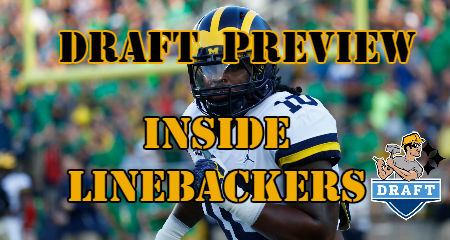 The 2019 NFL Draft is now less than a two weeks away. This year’s Draft is in Nashville, Tennessee as the NFL has decided to continue the trend of bringing the draft bonanza around the country (buckle up for Vegas in 2020). As we have done the last few years, in the weeks leading up to the Draft we will be taking a position-by-position look at the Steelers roster and where their biggest needs lie in the Draft. Last week we covered the offense and this week is the defense. Today we look at the EDGE rusher position where the Steelers have spent 3 first round picks since 2013.

After losing Ryan Shazier late in the 2017 season, the Steelers did very little to address the inside linebacker position. Their biggest move was signing Jon Bostic in free agency, and subsequently lining him up against Keenan Allen for the Chargers to exploit for an entire game. Kevin Colbert said this offseason that he regrets not doing more to address the deficiency at inside linebacker. With LJ Fort leaving in free agency, the Steelers depth chart remains relatively thin. Vince Williams is a solid two-down player and the best tackler on the defense. Bostic is still around but is very similar to Williams and can’t be trusted in pass defense. The team signed Mark Barron from the Rams in free agency. Barron was originally drafted by the Buccaneers as a safety but moved to the 4-3 linebacker role with the Rams. Even with Barron’s signing, the Steelers still have a need for a linebacker that is athletic enough to cover both tight ends and running backs. Additionally, Shazier was seemingly the only player on the defense capable of generating a “splash” play. The Steelers need a play-maker and turnover-producer in the middle of the field in the worst way.

Last year we felt like it was a near guarantee that the Steelers would select at least one and possibly two inside linebackers. Instead they took two strong safeties (to add to Morgan Burnett who was already signed), possibly with the idea of playing one of them in the “dime linebacker” role. This experiment never got off the ground last year. Given Kevin Colbert’s quote about regretting not doing more to address the inside linebacker position, it seems almost certain that the Steelers will use a pick here.

LSU’s Devin White is the top inside linebacker prospect, but it seems like he is pegged to Tampa at the #5 overall pick and almost certainly won’t make it out of the top 10. The name most often tied to the Steelers is Michigan’s Devin Bush. Bush could go as high as the Top 10 or could fall to the Steelers at 20. The more likely scenario is that Pittsburgh would need to move up into the early teens to land him. Inside linebackers coach Jerry Olsavsky was on hand for the Pro Days of Alabama’s Mack Wilson (Prospect Profile), Clemson’s Tre Lamar (Prospect Profile), and West Virginia’s David Long (Prospect Profile). The Steelers have also spent some time scouting mid-round players including Texas’ Gary Johnson (Prospect Profile) and Texas A&M’s Tyrel Dodson – both of whom had Kevin Colbert at their Pro Day. Pre-draft visitors to Pittsburgh included Akron’s Ulysees Gilbert (Prospect Profile) and Washington’s Ben Burr-Kiven (Prospect Profile). Another name to keep an eye on is Minnesota’s Blake Cashman who is coming off an injury but might have the best instincts and mental processing speed in the class.