Because the Steelers so often draft in the latter half of the first round the issue of “best player available” often comes up. The debate here centers around whether or not you take the highest ranked guy available at a position of need or if you take the best player overall who is still on the board. Often times the BPA may be at a position where the Steelers are already pretty well stocked. If that’s the case, do you still take this guy over a player at a position of need? It comes down to many things but one thing to look at is simply how far down the board do you have your need player versus the BPA? Example: Player A is the BPA and you have him graded as an upper level first rounder meaning picks 1-16. He’s still there at 20. Player B is the highest rated player remaining that you have at your position of need but your grade on him is ‘low first to mid-second round.’ This is where General Managers earn their money. Neither of the players is a ‘sure thing.’ Very few Draft Prospects are, but you still have to make a selection. What could be intriguing this year is that with all those draft selections, perhaps the Steelers could select the BPA at 20, then trade up in the second to get their highest-rated position of need player. Last year may have been similar to what I’m offering here. I’m guessing the Steelers had other players rated higher than Terrell Edmunds but he was high enough on their board where they felt taking him in the first was not going to be a reach. This whole situation is another reason why the Draft has become such an enormously popular event with each passing year.

Cnic and I hammered out more of our Draft Preview Podcasts last night. On this episode of the Steel City Blitz Steelers Podcast 126 presented by 26shirts.com we took a look at the tight end position and there are plenty of guys to like here.

Yesterday I commented on Rashard Mendenhall’s tweet calling Ben Roethlisberger a ‘racist.’ I did not mention that Mendenhall tweeted exactly three hours after his initial tweet that he was conducting an ‘experiment’ and that he did not believe Big Ben was a racist. While this may in fact be the case, it’s further proof of Mendenhall’s inability to think before he tweets. He knew exactly the reaction he would get but what he didn’t take into account was that he was messing with a real person and toying with the emotions of millions of people. I suggest Mendenhall find some other method to do his research in the future.

And for the really good news…. It appears the Steelers will open the season in New England on Sunday Night Football. I hate the Commissioner. 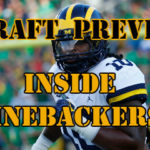