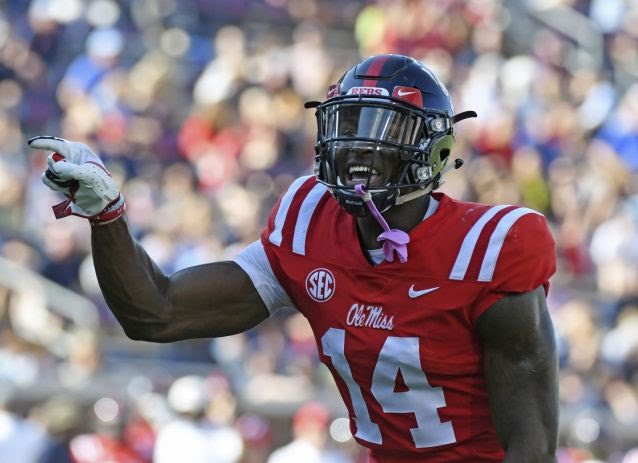 With Antonio Brown’s impending departure from Pittsburgh, the Steelers will be looking to bolster their offensive weapons heading into the 2019 campaign. That, of course, will be no easy task given that they already demand much needed additions to the roster in several other departments. With that in mind, I investigated whether or not D.K. Metcalf out of the University of Mississippi could be a viable replacement for the aforementioned Brown.

In terms of physical attributes, Metcalf might just be the most complete receiver in an amazing WR class. His height, coupled with his strength, provides a complete mismatch for smaller corners/linebackers. His hand usage at the line of scrimmage is superb and often gains him a jump on his marker. In addition, he uses his speed and athleticism incredibly well in order to gain leverage, which often resulted in him being wide open. Moreover, he is notably efficient on comeback routes particularly because he can get out of his breaks smoothly. Extremely agile and elusive for his size as well as possessing big long strides, which resulted in numerous big YAC plays. Metcalf can also contort himself in order to adjust to the ball’s trajectory mid-play and displayed the ability to high-point the football beautifully.

Aside from his receiving abilities, he hustles on every single play, even as a blocker. Furthermore, his blocking technique is relatively good when needed, but could still be improved as ever.

The play below exemplifies everything that Metcalf excels at in one single play. Here, you can see him beat his man at the LOS through his agile movements and strong use of hands, whilst he beautifully high-points the ball to win the game for Ole Miss.

Multiple red flags being that he has suffered two season ending injuries; foot (2016) & neck (2018). Remains fairly raw due to lack of playing experience. Route tree is limited in the sense that he is rather predictable in the routes he runs, as they are generally all very similar. Suffered from fairly poor quarterbacking which resulted in a couple dropped balls.

D.K. Metcalf is an absolute freak of nature. He possesses a wonderful physique, good speed and big play ability, which will make him a certainty to succeed in the NFL. Evidently, I’d love to make a case for him to join the Steelers in the upcoming draft. However, I highly doubt he’ll escape day one, he’s just that good. As a result of this, I can’t foresee Kevin Colbert being able to justify using our 20th selection on an offensive player, whilst our defense continues to struggle relentlessly.

Regardless, if Metcalf can maintain his fitness and abstain from injury, he will be a special talent within the league for years to come.