The WPIAL Championships took place last weekend with Pine-Richland, Central Valley, Beaver Falls, and Jeannette all winning by mercy rule. The best game of the weekend was the overtime thriller between Thomas Jefferson and Aliquippa with the Jaguars emerging victorious. Three of this year’s WPIAL Champions (Central Catholic, Thomas Jefferson, and Central Valley) were back-to-back winners. Congratulations to all of the WPIAL Champions! Additionally, congratulations to the WPIAL and all of the teams for executing a successful playoff schedule where no games had to be cancelled or postponed.

This week also marks the move into the PIAA playoffs for most of the WPIAL teams. Central Catholic entered the state tournament last week but had to forfeit their 6A quarterfinal against Erie McDowell due to COVID. The other five WPIAL Champions now enter their respective PIAA brackets at the semifinals. This week’s show features a special treat – highlighting the Pine-Richland vs Governor Mifflin 5A Semifinal as the Game of the Week, we were able to interview both head coaches!

Topics on this week’s show include:

The WPIAL Blitz Show features Ian and Bruce from  Small Player Big Play. The WPIAL Blitz Show is available for FREE all season on YouTube and through the Small Player Big Play App, which provides schools and youth sports organizations the opportunity to fundraise by live-streaming their games and events. Check out their Twitter page and get the app for free on Apple or Andriod devices. Also a huge shout-out to Chris @END2008 for making all of the helmet graphics this season. 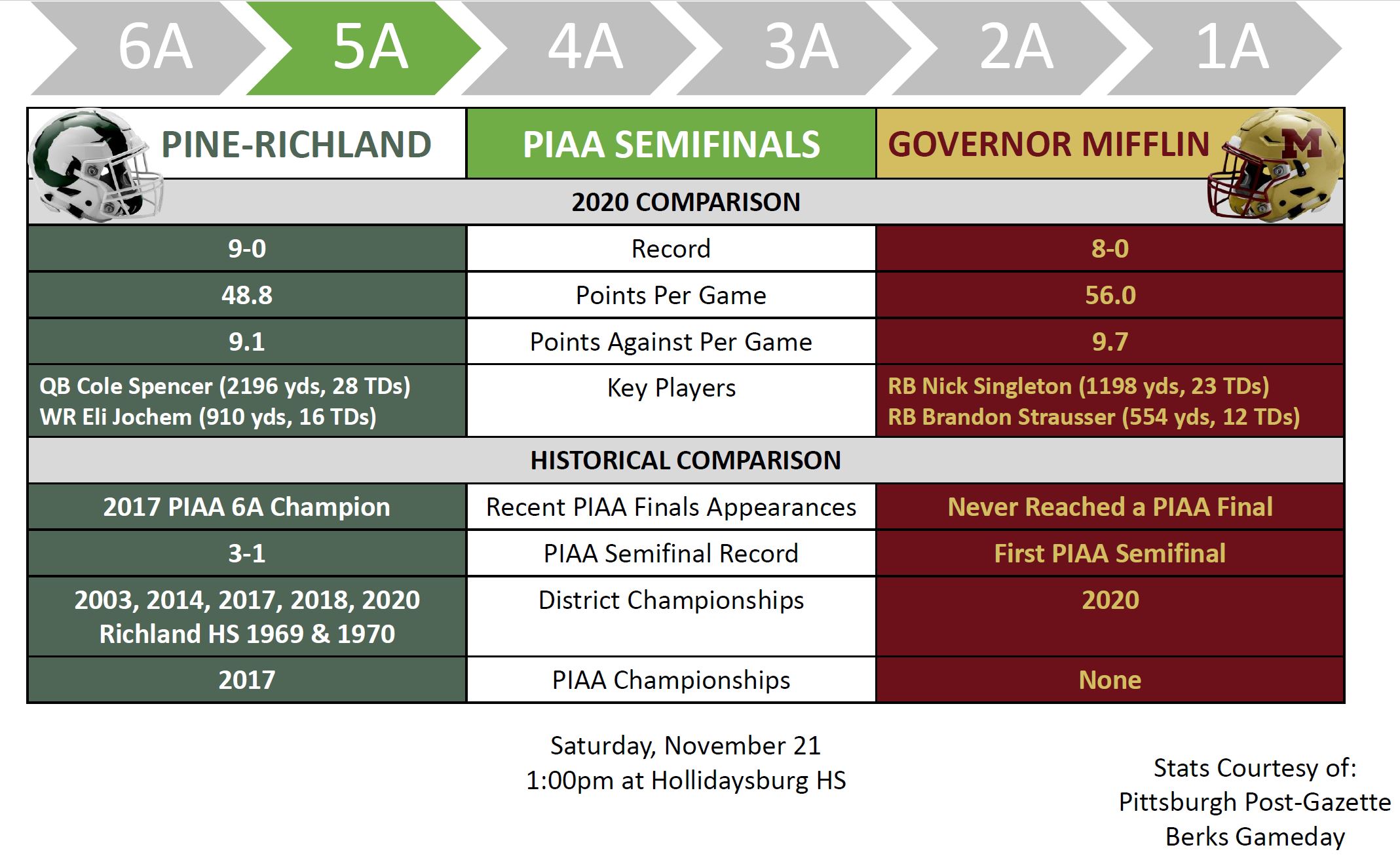 Pine-Richland topped Peters Twp to win their 7th WPIAL title in school history. Both teams had lost in the WPIAL final last season with Peters losing to Gateway by 1 point in 5A and Pine-Richland falling to Central Catholic in 6A. Typically a pass-heavy tiem, Pine-Richland leaned on the ground game to beat Peters Twp. The Rams ran for over 270 yards. Star quarterback Cole Spencer threw for 130 yards and 1 TD and ran for 103 yards and 2 TDs to lead the Rams to their 3rd WPIAL title in 4 years. This Pine-Richland team is loaded with 3-year starters who have been this deep in the tournament before, as they fell to St. Joe’s Prep in the PIAA semis in 2018. On the other side of this matchup, Governor Mifflin is a run-heavy team that runs an option offense with one of the best juniors in the state in RB Nick Singleton who has college offers from nearly every major D1 program. 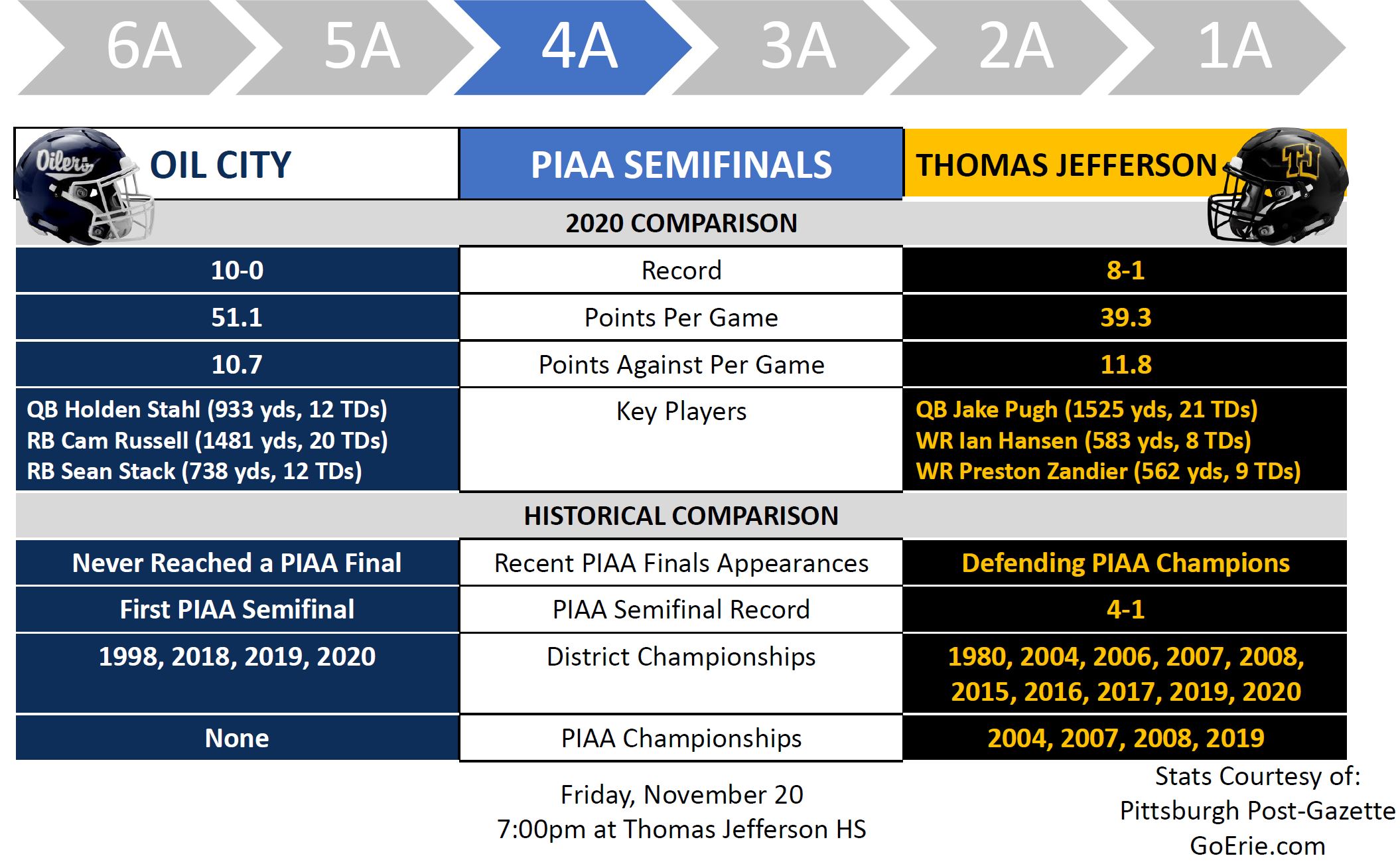 The Game of the Week in the WPIAL Championships was Thomas Jefferson’s overtime victory over Aliquippa. The two storied programs had met once before, in the 1980 WPIAL AAA Championship. After a 7-7 tie at halftime, TJ pulled ahead 28-14 at the outset of the fourth quarter. But Aliquippa took to the air and mounted a comeback to tie the game at 28 and send it to overtime. Thomas Jefferson scored first in overtime then intercepted Aliquippa in the end zone to claim their 10th WPIAL title. Quarterback Jake Pugh was the player of the game for TJ, throwing for 2 TDs and running for 2 more, including the game-winner in overtime. It was also the 9th WPIAL title for head coach Bill Cherpak, who has now won the most WPIAL titles of any head coach. With Cathedral Prep moving up to 5A this season, Thomas Jefferson’s semifinal matchup is with an Oil City team who is having an historically good season. Oil City has lit it up on offense this year, averaging over 50 points per game and have done it both through the air and on the ground. 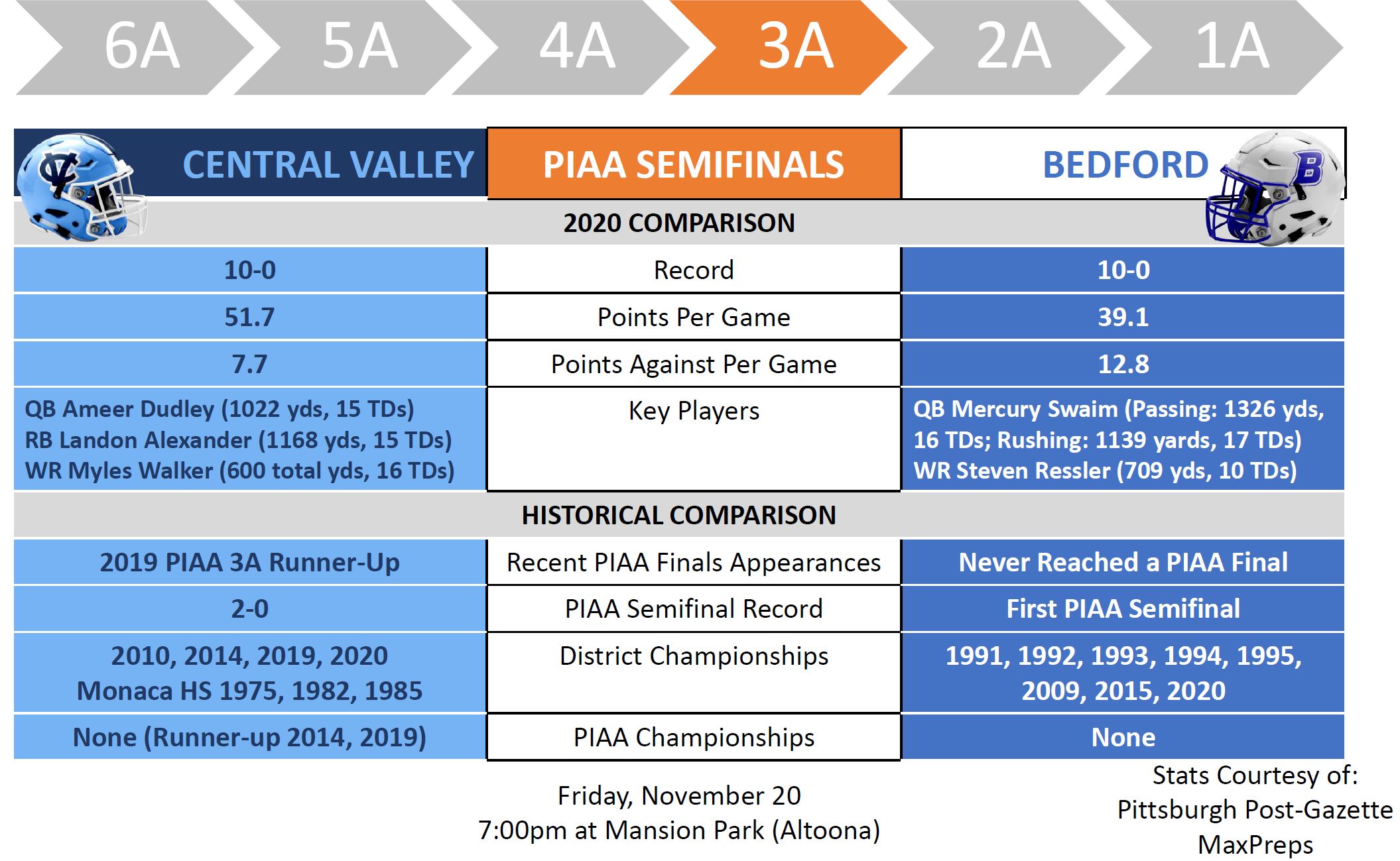 Central Valley won back-to-back WPIAL Championships by enacting their 10th mercy rule of the season, topping Elizabeth Forward. It was Central Valley’s 4th WPIAL Championship since the merger of Center and Monaca in 2010. The Warriors are loaded with talented players who all showed up in the WPIAL final. Landon Alexander was the player of the game after running for over 200 yards and 3 TDs. Defensively, Sean FitzSimmons was unblockable and had a number of sacks. This week, Central Valley’s stout defense will have to figure out how to defend Bedford’s dual-threat QB Mercury Swaim. One of the challenges may be defending WR Steven Ressler after shutdown CB Stephon Hall suffered an arm injury in the WPIAL final. This is the deepest Bedford has ever made it in the state tournament, while Central Valley has been out for revenge all season after losing in the PIAA Championship last season. 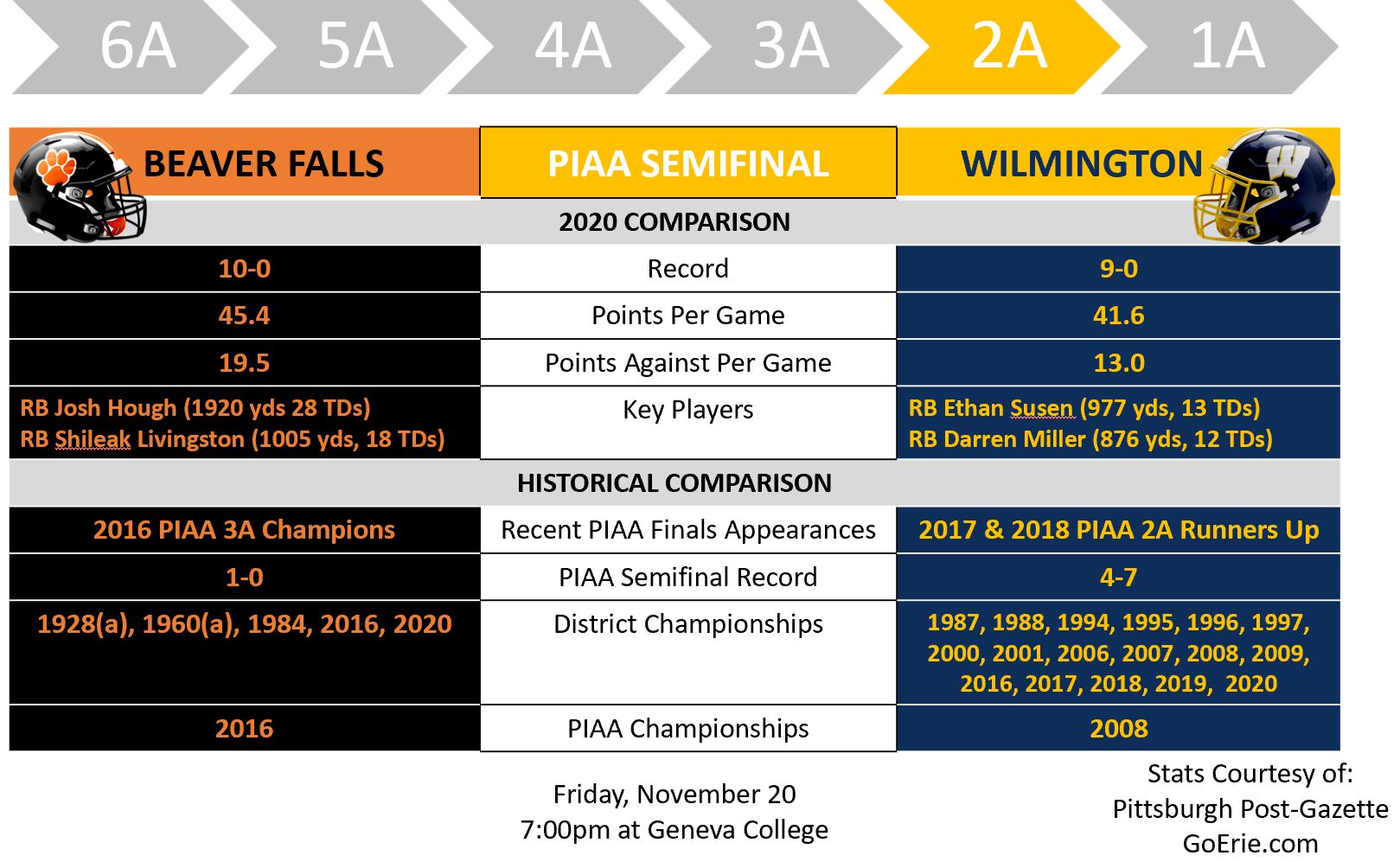 Beaver Falls defeated Sto-Rox by a 43-30 margin in the WPIAL Championship, but the game was not as close as the score indicated. Beaver Falls was up 28-0 at halftime and extended the lead to 36-0 early in the second half to enact the mercy rule. With the clock running, Sto-Rox did not give up and stormed back, recovering multiple onside kicks. In the end, Beaver Falls emerged victorious to claim their 5th WPIAL title. This game against Wilmington will be two smash mouth rushing teams. The Greyhounds have been one of the premier 2A teams from District 10. Wilmington reached the PIAA Championship, losing to Southern Columbia, in 2017 and 2018 then fell to WPIAL Champion Avonworth in the PIAA semifinals last year. Beaver Falls’ dynamic duo of Josh Hough and Shileak Livingston against Wilmington’s combo of Ethan Susen and Darren Miller. 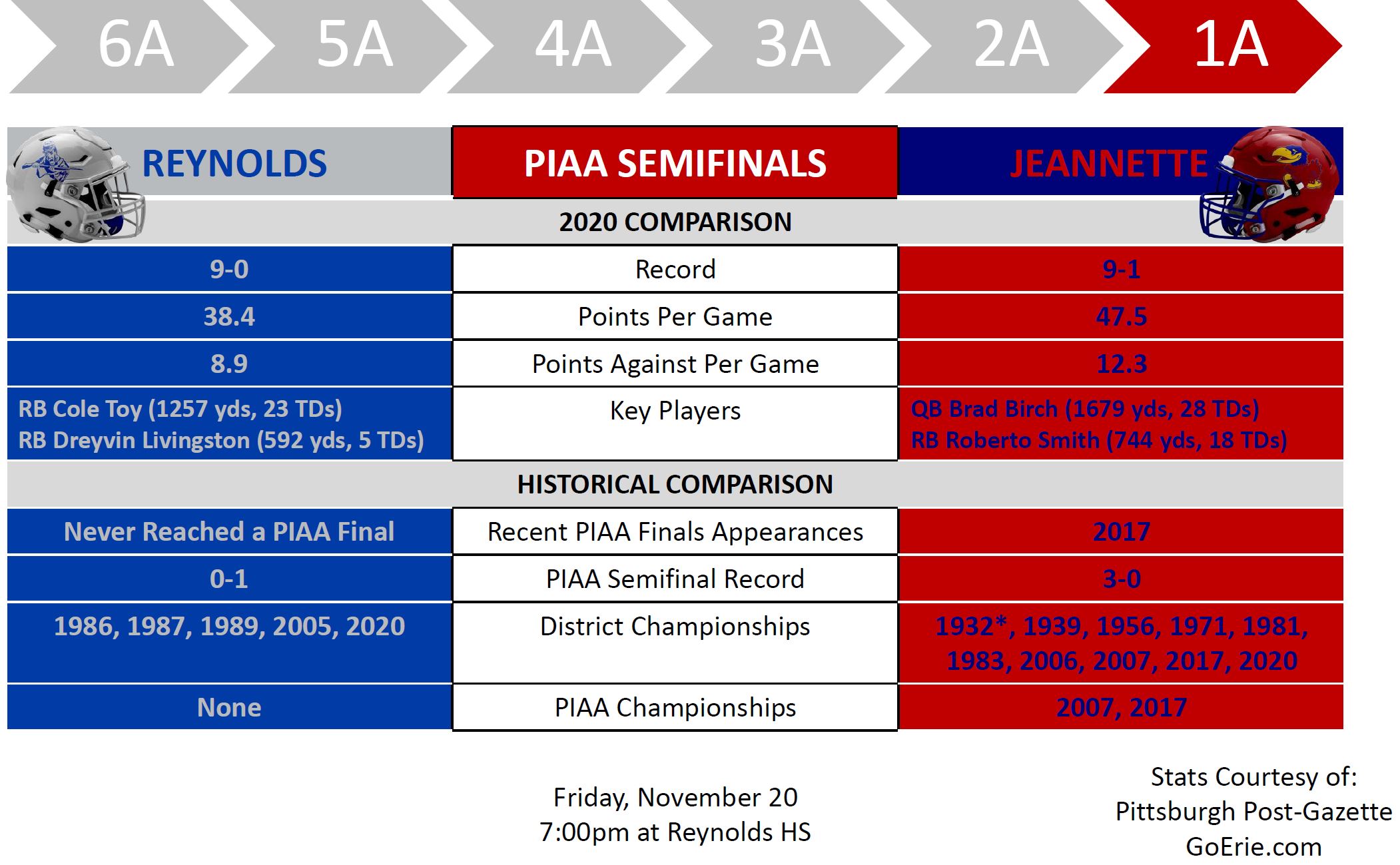 One of the biggest surprises of WPIAL Championship Weekend was Jeannette enacting the mercy rule on Clairton in the 1A Championship. Reportedly, it was the first time the mercy rule was enacted on Clairton since the PIAA instituted the rule in 1988. Jeannette exorcised some demons after losing to Clairton in the 2015 and 2016 WPIAL final and earned their 3rd victory over the Bears since 2014. Jeannette’s defense produced 6 turnovers, including Jaydin Canady returning a blocked punt and a fumble for touchdowns along with an interception in the end zone to stop a Clairton scoring drive. Roberto Smith was an all-around star for Jeannette with a rushing touchdown, passing touchdown, interception, fumble recovery and kicked a field goal. Jeannette moves on to face District 10 Champion Reynolds, who reached the PIAA semifinals for the first time since 2005. With Farrell being moved up to 2A this season, the door was open for Reynolds to make a deep run out of D10. The Raiders rely heavily on their ground game and RB Cole Toy. 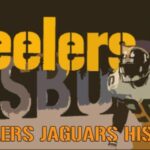