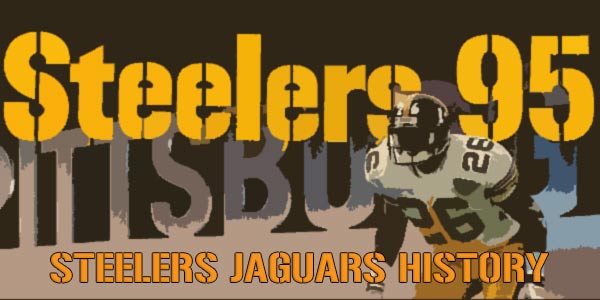 In terms of the NFL, the Jacksonville Jaguars are the new kids on the block having joined the league in 1995. The history with the Steelers show that the Jaguars are ahead 14-12 but recent form reveals that the home team usually take the honors in the contests.

As part of SteelerNationUK (SNUK), I was at the first game played between the teams in Jacksonville. SNUK had enjoyed a weekend in Pittsburgh watching the Steelers roll over the Chargers 31-16 and our spirits were high as we traveled south to spend a few days in Orlando before moving to Jacksonville for the game.

It proved to be an interesting flight to Florida. The whole world was waiting on the verdict from the trial of O.J. Simpson so I asked the stewardess if the captain could announce the outcome if it was delivered while we were in the air. Needless to say, we were all surprised with the verdict.

After winning their first two games of 1995, the Steelers lost the next two before bouncing back for the visit of SNUK when they moved to 3-2.

With all the challenges faced by an expansion team, unsurprisingly the Jaguars lost their opening four games. For their fifth game, they edged a 17-16 win in Houston to provide some encouragement for their fans before hosting the Steelers.

Pittsburgh’s quarterback Neil O’Donnell had missed four games after breaking his little finger in the season opener but returned to practice the week before the game. The Steelers had also lost their future Hall of Famer cornerback Rod Woodson for the regular season in the same game.

While O’Donnell was enjoying his return, Coach Bill Cowher received news that he was $7,500 lighter after the NFL fined him for stuffing a photo into an official’s shirt during the week 4 Vikings game. The coach had reacted to a 12-men on the field penalty when the officials ran out of fingers to count the players.

Cowher was agitated enough to insist on showing the referee a photo with just eleven players on the field.  He failed to make his point in an expensive way as the penalty stood. 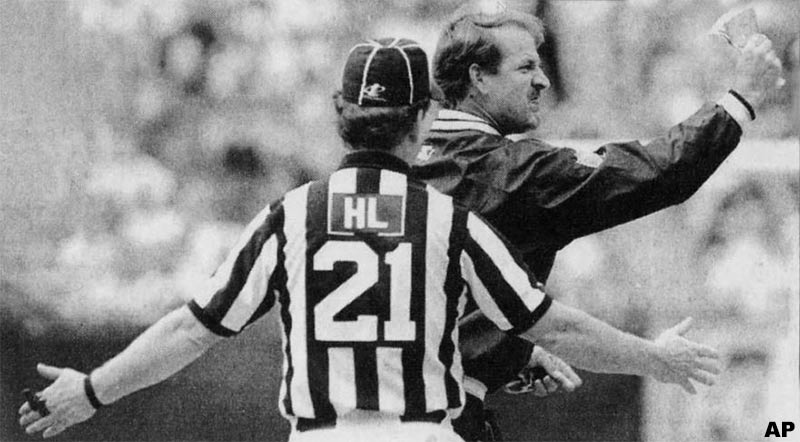 Usually part of football in Pittsburgh, quarterback controversy emerged in Jacksonville in the week before the game. Jaguars coach Tom Coughlin benched Steve Beuerlein, who had started the first five games, and replaced him with Mark Brunell, who had led the team to their one victory.

The Steelers at the Jaguars October 8th, 1995 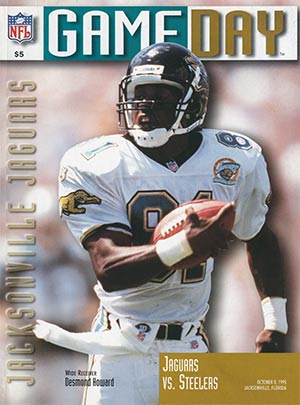 The decision to start Brunell was rewarded early when he took the Jaguars 79 yards on the opening series and found Cedric Tillman with a 10-yard touchdown pass. In the second quarter, Jacksonville increased their lead after Andre Hasting’s fumble gifted them outstanding field position on Pittsburgh’s 31.  A touchdown run of 6 yards from rookie James Stewart increased the Jaguars advantage to 14-0.

The Steelers managed a brief response when Steve Avery caught an 18-yard touchdown pass from O’Donnell in the second quarter, but the Jaguars were not to be denied. Rookie Mike Hollis kicked a 53-yard field goal to give the Jaguars a 17-7 halftime lead.

The Steelers were in self-destruct mode as holding penalties that nullified big gains and dropped passes combined to ensure they struggled to put together a coherent game plan while the Jaguars were resilient in defense. Three Norm Johnson field goals in the second half were the only reply Pittsburgh could muster while Hollis kicked another for the Jaguars to take a 20-16 victory.

The Jaguars were 11-point underdogs and certainly not expected to pull off the win against the Blitzburgh Steelers who had reached the AFC Championship game the previous season. Kevin Greene led Pittsburgh with three of their four sacks, but it counted for nothing as Pittsburgh slumped to 3-3 on the season.

It was the worst start under Coach Cowher who admitted, “I’m disappointed. We’ve been like a yo-yo and our team knows that.” Kevin Greene was honest enough to suggest, “I don’t think we were prepared to play.”

Dan Rooney acknowledged, “We played a bad game. A loss is a loss, but this one is tough.”