It’s hard to believe but Week 8 is in the books and there is just one game left in the 2021 regular season. Only 8 teams entered tonight being mathematically eliminated from the playoffs which meant nearly every game had playoff implications. Here’s a rundown of everything that happened on Friday night. Check our WPIAL Standings Page at the end of the weekend for an updated look at the playoff picture.

Mt. Lebanon 38, Seneca Valley 7 – Mt. Lebanon’s run of dominance continued. The Blue Devils have won every game by at least 21 points and locked up their first conference title since 2010! Alex Tecza finished with 179 yards and 3 TDs while Eli Heidenreich scored on the ground and through the air.

Norwin 16, Canon-McMillan 7 – In a defensive struggle, Norwin was holding a 3-0 lead before a 95-yard touchdown run for Dom Barca opened it up. Barca would add another touchdown on a fourth down reception as Norwin got their first conference win of the season after giving North Allegheny and Mt. Lebanon troubles the last two weeks.

Moon 30, Bethel Park 0 – Moon clinches the conference title with a dominant performance on both sides of the ball against Bethel Park. Moon remains the only unbeaten team in 5A.

Upper St Clair 31, South Fayette 28 (OT) – South Fayette had a 28-13 lead but two Josh Hufnagel interceptions in the fourth quarter set up a miracle Hail Mary on an untimed down (thanks to a penalty) to tie the game at 28 at the end of regulation. Ethan Hiester blocked South Fayette’s field goal in overtime then Bennett Henderson booted through the game-winner. The Cardiac Cats were back in this one but once again prevailed.

Penn-Trafford 49, Franklin Regional 7 – Penn-Trafford locked up the conference title by invoking the mercy rule with a 42-point first half.

Penn Hills 40, Shaler 3 – Penn Hills keeps pace atop the conference and now is looking at a three-way tie heading into the final week of the season.

Pine-Richland 33, Kiski 27 – Kiski gave it everything they had and kept it tight all night, but Pine-Richland prevailed in the end with a defensive stop on Kiski’s final drive.

McKeesport 42, Thomas Jefferson 28 – McKeesport’s Kanye Thompson scored 3 TDs, two on the ground and one on a kickoff return. Bobbie Boyd took the game over in the second half, finding the end zone three times himself and running for 227 yards. McKeesport sets up a date with Belle Vernon for the conference title next week.

Laurel Highlands 39, Trinity 34 – These two teams have produced a number of thrillers in the last few years and this one did not disappoint. Laurel Highlands held a 19-14 halftime lead but Trinity returned a blocked punt for a touchdown to go up 22-19 in the third. Rodney Gallagher struck back with a 55-yard TD run then answered Trinity’s next TD with a jump-pass TD. Just before the third quarter expired, Trinity answered back to take a 34-33 lead. Laurel Highlands would score the only touchdown of the fourth on a Rodney Gallagher run. With under a minute to go, the Mustangs defense got a stop on 4th and 2 to send them to the playoffs for the first time since 2015.

West Mifflin 24, Ringgold 8 – Ringgold had a chance to get back into the playoff race but needed a win and a Laurel Highlands loss. Neither of those happened and the longest conference losing streak in the WPIAL continues.

Armstrong 35, Plum 28 – Cadin Olsen came in as one of the WPIAL’s leading passers, but tonight he did it on the ground, rushing for 3 TDs. Armstrong clinched a playoff spot with the victory.

Highlands 40, Greensburg Salem 20 – Highlands took advantage of two early fumbles to build a 13-0 lead. In a battle of the Golden Rams against the Golden Lions, Highlands got a massive performance from Chandler Thimons who ran for 3 TDs and threw two more. The Golden Rams are now right back in the thick of the playoff picture.

Indiana 46, Mars 10 – Mars’ playoff hopes got new life earlier this week when their loss to Plum was changed to a forfeit victory. Indiana picks up an important victory in the playoff chase.

Hampton 30, Knoch 0 – Hampton locked up the conference title last week and kept their perfect season alive with a win over Knoch.

Beaver 14, Montour 7 (OT) – For the second week in a row, Beaver needed overtime. The Bobcats scored first and stopped Montour on 4th down to clinch a playoff spot.

East Allegheny 40, Valley 0 – East Allegheny got a much-needed victory that eliminates Valley from playoff contention. The Vikings were without a number of players who were suspended after a fight in last week’s game against Yough.

Burrell 43, Derry 13 – With a big win over Derry, Burrell has put themselves right back into the playoff picture. Derry is a team in turmoil after dismissing their head coach earlier this week.

Yough 49, Brownsville 26 – Even with a number of players out of the lineup after discipline from the fight in last week’s game against Valley, Yough still ran past Brownsville to pick up their first win of the season. This may be the last WPIAL game for Brownsville as their school board voted to play an independent schedule next cycle.

Central Valley 43,  Avonworth 6 – In a battle for the Northwest Six Conference title, Central Valley showed they are still the team to beat in the WPIAL. The two-time defending champs looked the part.

Ambridge 35, Quaker Valley 12 – Ambridge jumped out to a 20-0 lead in the first quarter and cruised to victory. The Bridgers entered the season with the second-longest losing streak in the WPIAL and have now won two games and have the inside track on a potential playoff spot. D’Saun Harmon had a receiving touchdown, an interception he returned to the 1 to set up another score, and returned a blocked punt for a score.

Keystone Oaks 54, Hopewell 6 – After an 0-2 start to conference play, KO has won two in a row. Hopewell remains winless on the season and has a date with Central Valley next weekend. KO will take on Ambridge.

Deer Lakes 27, South Allegheny 14 – After dropping a few games, Deer Lakes gets back on the right track as they head into the season finale where they will have a chance to make the playoffs.

Serra Catholic 46, Summit Academy 0 – Serra cruised past winless Summit to set up a showdown with Steel Valley for the conference title next week.

Steel Valley 57, Apollo-Ridge 6 – Steel Valley ran out to a 49-0 halftime lead to invoke the mercy rule. The Ironmen will take on Serra Catholic for the conference title next week.

McGuffey 35, Beth-Center 8 – The Highlanders gave themselves a chance next week against Washington to force a 3-way tie atop the conference.

Washington won by forfeit over Frazier.

Beaver Falls 28, Neshannock 23 – Neshannock held a 16-6 halftime lead that they extended to 23-6 in the third quarter. But the defending WPIAL Champs battled back and won

Freedom 34, Mohawk 20 – After winning their first three conference games, Mohawk has dropped 3 in a row. Freedom plays New Brighton next week in a game that is essentially a Casket Match.

New Brighton 34, Riverside 0 – New Brighton kept their playoff hopes alive with a big win over Riverside. Gary Pugh Jr threw for 3 TDs and ran for another to lead the Lions to victory.

Cornell won by forfeit over Fort Cherry, which means Cornell clinches their first conference title since 1983.

Rochester 31, Shenango 16 – Rochester locks up a playoff spot with a win over Shenango, who had won 3 in a row after a winless start.

Northgate 21, OLSH 19 – Northgate wins their third game of the season after entering the year with the WPIAL’s longest losing streak. The Flames have battled all year and been close in all of their games. This result also keeps their playoff hopes alive while OLSH has gone from playing for the top spot in the conference last week to now fighting for their playoff lives next week.

Burgettstown 12, Union 8 – Burgettstown keeps their playoff hopes alive with a win over Union.

Clairton 12, Springdale 0 – The Bears defense came through once again to secure another conference title for Clairton

GCC 49, Jeannette 3 – Former Jayhawk Jaydin Canady went OFF against his former team. He had 191 rushing yards and 3 TDs and returned a punt for a touchdown.

Leechburg 66, Imani 6 – Leechburg clinched their first playoff berth since 1988, ending a 32-year drought the longest in the WPIAL!

West Greene 56, Jefferson-Morgan 8 – Colin Brady, who is only a sophomore, surpassed 2000 career rushing yards. Brady ran for 184 yards and 4 TDs on the night and West Greene clinched the Tri-County South conference title.

Mapletown 50, Bentworth 15 – Mapletown clinched their first playoff berth since 2016 with a big win over Bentworth.

California 23, Monessen 0 – The Trojans lock up a playoff spot with a win over Monessen.

Carmichaels 63, Avella 22 – Trenton Carter had a monster night for the Mighty Mikes, and became the 12th player in WPIAL history to join the 1000/1000 club. With a game still to go, Carter has amassed more than 1000 passing yards and 1000 rushing yards.

Congratulations Trenton! The community and the coaching staff are very proud of you. @Trenton_Carter2 pic.twitter.com/ArcgwYKOgj 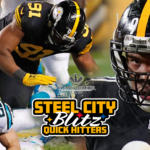 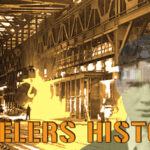