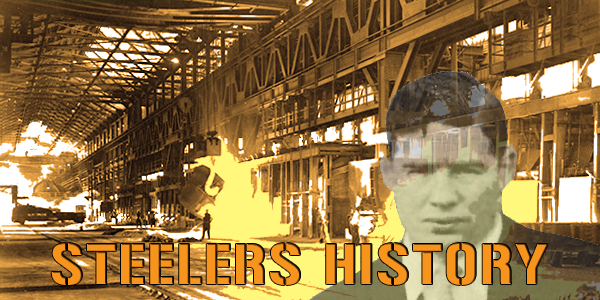 Steeler Nation is well aware the Steelers originally entered the NFL in 1933 with the same name as the city’s baseball team. At the time, baseball was America’s game and ruled the nation’s sports pages so football fans in Pittsburgh would have found it difficult following their version of the Pirates.

At the beginning of 1940, Art Rooney, decided a name change would help dispel any confusion over his team for their devotees. Rooney organised a competition for a new nickname which attracted 3000 entries and here are some of the suggestions:

Twenty-one fans received two tickets to the 1942 season as a reward for coming up with the new name of Steelers.

The team had not enjoyed much success in their first eight seasons in the league. Competing in a city with three collegiate teams that prospered, Rooney had to lean heavily on his other sources of income to keep the team afloat.

Rooney’s friend and owner of the Eagles, Bert Bell, was even less fortunate both on the field and with ticket sales in Philadelphia. The team had entered the NFL in the same year as Pittsburgh and the Eagles struggled to post eighteen wins in eight years.

While the two owners failed to make ends meet in their chosen sport, multi-millionaire Alexis Thompson was living the good life and was recognised as part of New York’s wealthy café society. He would often feature in the gossip columns regarding which actress he was escorting at the time. He was also no stranger to sport, having been a member of the field hockey team that went to the 1934 Berlin Olympics.

Thompson was the grandson of the founder of the Republic Iron and Steel Company. Based in Youngstown, Ohio the company produced iron and steel and reached its highest levels of productivity and profit in 1940.

On December 9, 1940, the Pittsburgh Sun-Telegraph broke the news that Rooney had sold his Pittsburgh football team to Thompson. The purchase price was indicated to have been $160,000, but as Thompson had lost a six-figure sum on a failed musical, it would not have made the slightest dent in his bank balance.

“I’ve been trying to complete a deal for a franchise for three months,” Thompson announced when the agreement made the headlines. “The deal’s been on and off several times. We’ve formed a company under the name East-West Sporting Club to buy into the league and are all set.”

He had attempted to purchase the Eagles because of its favourable location to New York, but after his pursuit collapsed, Thompson turned his attention to the other failing team in Pennsylvania, the Pittsburgh Steelers.

Although Rooney was selling his team, he had no intention of giving up his involvement with the sport he loved. He used $80,000 of the money he received from the sale of the Steelers to become a partner with his friend Bert Bell, owner of the Philadelphia Eagles.

The Eagles had fared worse than the Steelers, both on the field and in the pocket of the owner, but Rooney was keen to keep an involvement in pro football. The Eagles were to be renamed the Keystoners and divide its games between Pittsburgh and Philadelphia which confirmed Rooney would still have a partial stake in his home town. The players of both teams would be divided between the two franchises by lot.

Competing in a football city in which the sport prospered through its three successful collegiate teams, Rooney was being sincere when he explained why he was selling his team. “It’s not the fault of the fans or the newspapers that we haven’t been able to put pro ball successfully in Pittsburgh. We just simply haven’t been able to build up a winning team.”

Thompson was keen to change his new team’s name to the Iron Men, believing it would improve their image from the one associated with a losing football team. The name had been suggested by his new coach Earle “Greasy” Neale.

In April of the following year, just four months after the original sale of the Steelers, the two franchises swopped owners.

Rooney had always regretted the sale of his Pittsburgh team. He was a hometown boy. Except for his horse racing exploits, his life centered around Pittsburgh sport. Rooney enjoyed playing baseball locally and had ventured into sandlot football before bringing pro football to his city.

As sportswriter Havey Boyle wrote in the Pittsburgh Post-Gazette at the time of the initial sale, “It was so much part of his life. It was not only his business but his hobby.”

The new deal made sense for both parties. Thompson would have a franchise closer to his home base of New York while Rooney would once again be owning the team in his home town and would avoid the toil of travelling to Philadelphia.

With Bell having to move while Art Rooney remained in his home town, it would indicate that it was the latter who was the prime motivator behind the exchange. Steeler fans could also feel a lot more comfortable now they had their Prez back. They always felt that if Thompson had not produced a winner in Pittsburgh, then he would have upped stakes and moved the franchise to Boston.

As the pro football fans in Pittsburgh heaved a big sign of relief, Rooney was very keen to emphasize, “That new name for the club, ‘Iron Men’ is out. We’ll still be the Steelers, and bigger and better, I hope.”