The WPIAL football action was spread out over three nights this weekend. This is the penultimate week of the regular season. There are still a number of big games taking place on Saturday. Check out our Games of the Week post for previews of some of the Saturday action. Here are the scores and some game notes from this weekend’s action.

Mt. Lebanon 48, Norwin 14 – Joey Daniels threw for 4 TDs to lead the Blue Devils to victory and set up a game with Seneca Valley for second place in 6A next week.

Upper St Clair 42, Moon 35 – The game of the night in the WPIAL. Moon led 35-21 before Upper St Clair stormed back for the victory. Ethan Dahlem capped the comeback with the game-winning QB keeper in the 4th quarter.

Penn-Trafford 64, Connellsville 28 – Connellsville’s Ky’Ron Craggette scored four first half touchdowns to keep the game tied at 28 at halftime, but Penn-Trafford pulled away in the second half to stay atop the Big East Conference.

Penn Hills 27, Fox Chapel 7 – The Indians get a big victory to essentially secure a second place finish in the Northeast Conference.

Kiski 55, Shaler 22 – Brock Wilkins had a breakout game for the Cavaliers, rushing for 4 TDs.

Thomas Jefferson 41, Ringgold 0 – Another dominant victory for the Jaguars who will finish the season with a much-anticipated game against McKeesport.

Belle Vernon 52, Trinity 14 – Trinity scored first, just the second team this season to score against Belle Vernon’s defense, but after that it was all Belle Vernon and Devin Whitlock.

McKeesport 35, Laurel Highlands 20 – McKeesport’s victory kept them in the playoff race, setting up a showdown with Thomas Jefferson next week with conference title implications.

Plum 35, Knoch 7 – Plum clinched their first outright conference title since 1982 with a victory over Knoch.

Hampton 42, Indiana 14 – The Talbots kept their playoff hopes alive with a victory over Indiana.

Highlands 34, Armstrong 27 – Armstrong led 27-6 in the third quarter but Highlands stormed back with Brock White scoring the game-winner with just seconds remaining.

Chartiers Valley 54, Beaver 7 – The Colts bounced back after their loss to Aliquippa last week to get a big victory over last place Beaver.

North Catholic 56, Deer Lakes 6 – The Trojans broke the 50-point mark once again as they rolled past winless Deer Lakes.

Freeport 38, Burrell 18 – The Yellow Jackets came back from missing two games due to COVID to stomp their rivals and set up a game with North Catholic for the conference title.

Elizabeth Forward 16, Mt Pleasant 14 – Nico Mrvos ran for a touchdown in the first half and threw for one in the second half to clinch the Interstate Conference title for Elizabeth Forward.

Central Valley 41, Ambridge 6 – The top team in 3A cruised to another victory.

Avonworth 21, Hopewell 13 – The Lopes got a much-needed victory in the middle of the Northwest Six conference to give themselves a chance to share the conference title if they can beat Central Valley next week.

Frazier 39, Beth-Center 0 – Kenny Fine ran for 4 TDs and had a pick-six to set up a potential Casket Match with Washington next week.

Beaver Falls 50, Freedom 14 – The best running back tandem in the WPIAL shined once again with Josh Hough and Shileak Livingston each running for 3 TDs for the Tigers. With Neshannock’s loss, Beaver Falls clinches the Midwestern Conference title.

New Brighton 27, Neshannock 21 – The “root for chaos” folks would love the Midwestern Conference this year as New Brighton’s victory secured the conference title for Beaver Falls and kept the Lions’ playoff hopes alive.

Laurel 40, Mohawk 15 – Laurel pulled away from Mohawk in the second half to keep themselves in the thick of the Midwestern Conference playoff race.

Seton LaSalle 47, Carlynton 18 – The Rebels got their first win of the season by beating Carlynton.

Shenango 45, OLSH 21 -Reis Watkins, the WPIAL’s second-leading rusher, left the game with an injury after scoring twice in the first half. Shenango pulled away in the second half to set up a game with Rochester for the conference title next week.

Rochester 35, Cornell 7 – The Rams bounced back from their loss to Fort Cherry to give themselves a chance to claim the conference title against Shenango next week.

Union 43, Fort Cherry 42 – The Rangers losing streak was snapped at two games in a hard-fought game against Union. The Scotties scored with less than 2 minutes left and converted the two-point conversion to take the lead and secure the victory.

Clairton 57, GCC 18 – Dontae Sanders scored 3 times and Jonte Sanders threw for 3 TDs and ran for another as the Bears dominated GCC to set up a showdown with Springdale for the conference title next week

Springdale 55, Imani 8 – The Dynamos dominate Imani Christian to earn a battle with long-time nemesis Clairton for the Eastern Conference Title next week.

Butler 55, Blackhawk 14 – Blackhawk’s game against New Castle was postponed so they scheduled a game against Butler who opted out of the WPIAL this season. Butler had lost their first four games this season and snapped a 24-game losing streak dating back to 2017 with the victory.

West Greene 53, Brownsville 12 – This was an impromptu game as Monessen cancelled on West Greene and Brownsville’s game against Southmoreland was cancelled due to COVID. West Greene jumped out to a 47-0 halftime lead and cruised to victory.

Seneca Valley 19, Baldwin 16 (OT) – Seneca Valley jumped out to a 13-0 first quarter lead but didn’t score again in regulation as Baldwin got a touchdown pass and run from Colton Brain. After Baldwin kicked a field goal in overtime, Nolan Dworek scored his second touchdown of the game to win it for Seneca Valley.

Gateway 21, Woodland Hills 16 – Gateway jumped out to a 14-0 lead then held off a Woody High comeback in their first game in a month. Derrick Davis had over 150 yards of total offense and a TD for the Gators.

Aliquippa 39, Montour 14 – The Quips secured another conference title, this one perhaps on of the most impressive in their storied history considering it came against 4A competition. Vaughn Morris threw for 2 TDs and ran for 2 more to lead the Quips.

California 49, Carmichaels 20 – The WPIAL’s leading rusher Jaedan Zuzak put on a show, running for 250 yards and 5 TDs and throwing for another to power California to the Tri-County South Conference title.

SCB Steelers Quick Hitters: The “On the Hunt” Edition 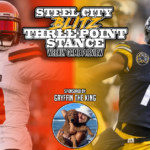