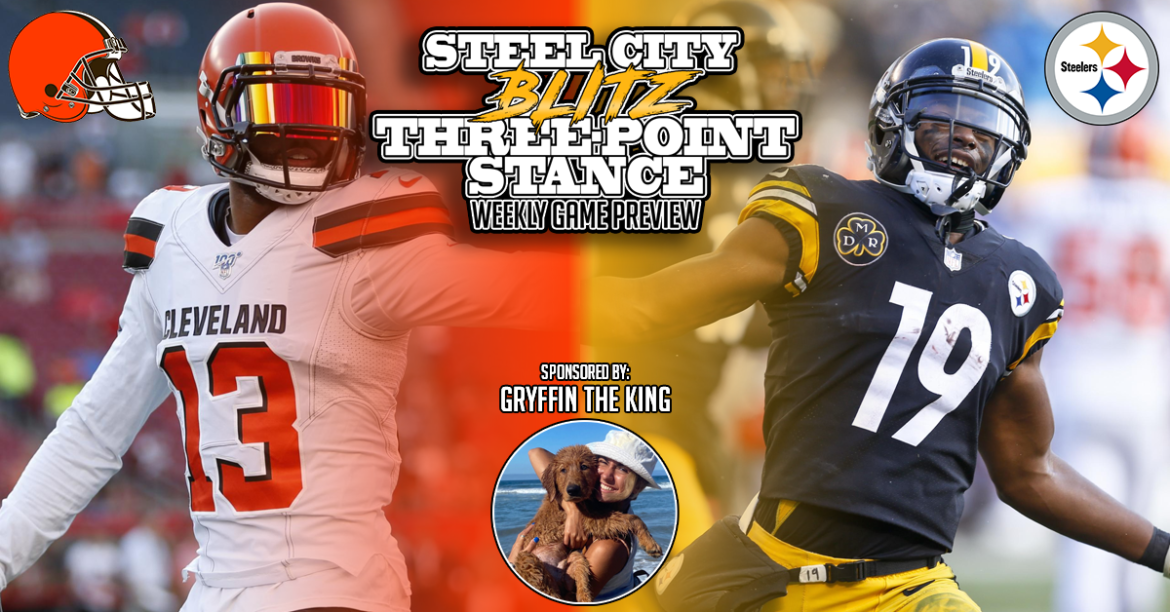 This is the Steel City Blitz Three-Point Stance. Your quick-hitting reference guide to everything you need to know about the Cleveland Browns and Pittsburgh Steelers in this week 6 matchup. The TPS is sponsored by Gryffin the King!

What: Cleveland Browns 4-1 at Pittsburgh Steelers 4-0

Last Week: The Browns jumped to a 27-10 lead in the second half but had to hold one for a 32-23 win over Indianapolis. The Steelers nearly blew a 31-14 lead on the Eagles before prevailing 38-29 in the Steel City.

Head Official: John Hussey. He is in his sixth season as a head official. Hussey last officiated the Steelers last October when they defeated the Los Angeles Chargers in California. In that game his crew had 14 total penalties accepted.

This Week in the AFC North: Cincinnati at Indianapolis 1pm, Baltimore at Philadelphia 1pm

What You Need to Know: The Steelers are 4-0 for the first time since the 1978 and 1979 seasons. Both ended with Super Bowl wins… The last time they were 5-0 was 1978 when they finished 14-2 and won the Super Bowl… Only three team out 138 in NFL history that had a week four BYE went on to win the Super Bowl. One of them was the 2005 Steelers… Pittsburgh has won the coin toss in all four games this season… Since 2007, Mike Tomlin is 30-9 at home against AFC North opponents… Ben Roethlisberger is tied for first with Brett Favre (9) for the most TD passes of 80 yards or longer…

What’s at Stake: The lead in the AFC North for starters. This game takes on some added significance for the Browns because they’ve already picked up a win (Cincinnati) and a loss (to Baltimore) in Divisional play while this is the Steelers’ first Divisional game. Neither team is in bad shape with a loss but as competitive as the AFC North appears, you need to win these games.

On the Hunt. I revealed this yesterday in Quick Hitters but for Keith Butler and the Steelers’ Defense the focus has to be Kareem Hunt. With Nick Chubb still injured, the bulk of the load will fall on Hunt. The Steelers have been very good against the run this season save for one long run by Miles Sanders last week. But Hunt is also dangerous in the passing game as well. He has to be accounted for and Butler can’t afford to have the wrong guys isolated on him. The ultimate goal here is to make Baker Mayfield throw way more than the Browns want him to. If he throws more than 25 times then that’s a good thing for the Steelers. Limit Hunt’s impact and that goes a long way towards a victory.

Don’t Get Caught Up in the BS. If you listen to the Browns’ players this is apparently the “Myles Garrett Revenge” game. This is the first time he’s been on the field against the Steelers since he tried cave in Mason Rudolph’s head with his own helmet. I don’t understand the “revenge” part of this at all but hey, do what you have to do Cleveland. The bigger point here is the Steelers cannot afford to get into this crap and take stupid penalties. The old saying is “do the talking with your pads” and that’s exactly what the Steelers need to do on Sunday. Garrett will make some plays, he’s that good, but don’t get involved with antics after the play.

Let Ben Work. Last week was one of Ben Roethlisberger’s best performances I’ve ever seen in terms of surgically diagnosing a defense and then executing. He is comfortable with all of this receivers and will go to them in any situation and perhaps most of all… He’s not taking shots deep in situations where a first down is just a few yards away. There’s always a time and a place for that but not to the extent he used to do it. Let JuJu Smith-Schuster and James Washington work those crossing routes and clear space for Eric Ebron and Chase Claypool. The running game will have to do enough to keep the pass rush off of Big Ben but overall, just let Ben cook.

Prediction. Don’t be surprised if the Browns get out to an early lead. This game is significant to the point for them that some are calling it their Super Bowl. Keep an eye on the Steelers’ Special Teams units which have been terrific this season. Cleveland has given up some big plays in this department and I can see this being a story on Monday morning. The Browns are without both safeties and that should allow Big Ben to operate a little more like he wants and needs to against a Browns’ defense that relies heavily on the pass rush. This won’t be easy by any stretch but….