The NFL season has entered the final quarter. Every team has had their bye week and played 12 games. As improbable as this season has been, the Steelers after a 1-4 start have won 6 of their last 7 and are currently in playoff position. There is some separation at the top with Baltimore and New England leading the race for the bye weeks by two games over Houston and Kansas City. Buffalo has a two-game lead for the first Wild Card while the Steelers are ahead of the Titans for the second Wild Card based on the conference record tiebreaker.

The Ravens have won 8 in a row, including a head-to-head victory over New England that gives them the edge for the top spot. There is some thought among Steelers Nation that if the Ravens win their next 3 games, they could have both the division and homefield advantage secured before Week 17 so they may opt to rest Lamar Jackson.

Even with their loss to Houston in Week 13, the Patriots are still in position for a first round bye. Two of their remaining four games are against teams that are already looking forward to 2020. The Bills are only a game back in the divisional race but have a more difficult closing stretch. New England also has the benefit of getting 3 of their last 4 games at home.

The AFC South race is not settled yet. Houston has just a one game lead over Tennessee and the two teams have yet to play this year. They will face off twice in the last three weeks in games that will have significant playoff implications.

Kansas City sits behind Houston due to a head-to-head loss in Week 6. The Chiefs also lost a head-to-head meeting with the Titans in Week 10, so they will have a significant interest in how the AFC South race plays out. They do have a comfortable two-game lead over the Raiders in the division after a throttling of Oakland this week.

The Bills have their playoff destiny in their own hands. Wins in the next two against Baltimore and Pittsburgh could set up a showdown with New England with the division title on the line. On the flip side, if the Bills were to drop their next 3 games against teams in the playoff picture, they could fall precariously close to the bottom end of the playoff picture. They do have a head-to-head win over Tennessee in Week 5.

Despite a plethora of injuries, including to Ben Roethlisberger, the Steelers are still in playoff position. This seemed improbable after an 0-3 start to the season, but thanks to a dominant defense the Steelers have found ways to win games. The Steelers currently hold the 6th spot due to a better conference record than Tennessee but also have an opportunity to catch Buffalo for the 5th seed with a head-to-head meeting in two weeks.

Tennessee has the hardest remaining schedule of any team in the playoff picture. The Titans are currently on a 3-game winning streak that includes a victory over Kansas City and last week’s win over Indianapolis. The Titans are just one game behind Houston in the divisional race with two head-to-head meetings remaining on the schedule.

The Raiders have been an up-and-down team all season. They have two wins against .500 teams in Indianapolis and Chicago, but also have a bad loss to the Jets. This week’s game against Tennessee could be a make-or-break game for Oakland. The Raiders finish with two games on the road against divisional opponents where they are just 1-5 this year.

After a 5-2 start, the Colts have slowed down and lost 4 of their last 5 games. They have a stretch of games against the NFC South where they will need to find victories in order to stay in the playoff hunt.

Jacksonville, Denver, Los Angeles, and New York are all 4-8 and still mathematically alive. With the exception of the chargers, the other three have all had injuries to starting quarterbacks this year which have shuffled players through the lineup.

Miami (3-9) and Cincinnati (1-11) are both mathematically eliminated from playoff contention.

Baltimore at Buffalo (Sunday, 1pm) – If the Ravens top Buffalo and the Steelers beat Arizona, Pittsburgh could be in position to surpass Buffalo for the first Wild Card spot in Week 15. The Bills are likely looking at things from a different perspective – with wins over Baltimore and Pittsburgh, they could be in position to challenge New England for the division title in Week 16.

Pittsburgh at Arizona (Sunday, 4:25pm) – First and foremost, the Steelers need to continue to stack wins and take care of business. If the Steelers win out, they will make the playoffs. Historically, they have not been good outside the Eastern Time Zone but Devlin Hodges found a way to win in Los Angeles earlier this year so perhaps he can repeat the feat in Arizona.

Kansas City at New England (Sunday, 4:25pm) – This is New England’s most difficult remaining game. Kansas City has a relatively comfortable two-game lead in their division and could put pressure on New England to miss out on a first round bye with a victory here.

Tennessee at Oakland (Sunday, 4:25pm) – Steelers fans will be doing a lot of scoreboard watching on Sunday afternoon. Tennessee and Oakland are the two teams directly behind the Steelers in the Wild Card standings. Oakland is 5-1 at home this season. 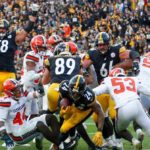