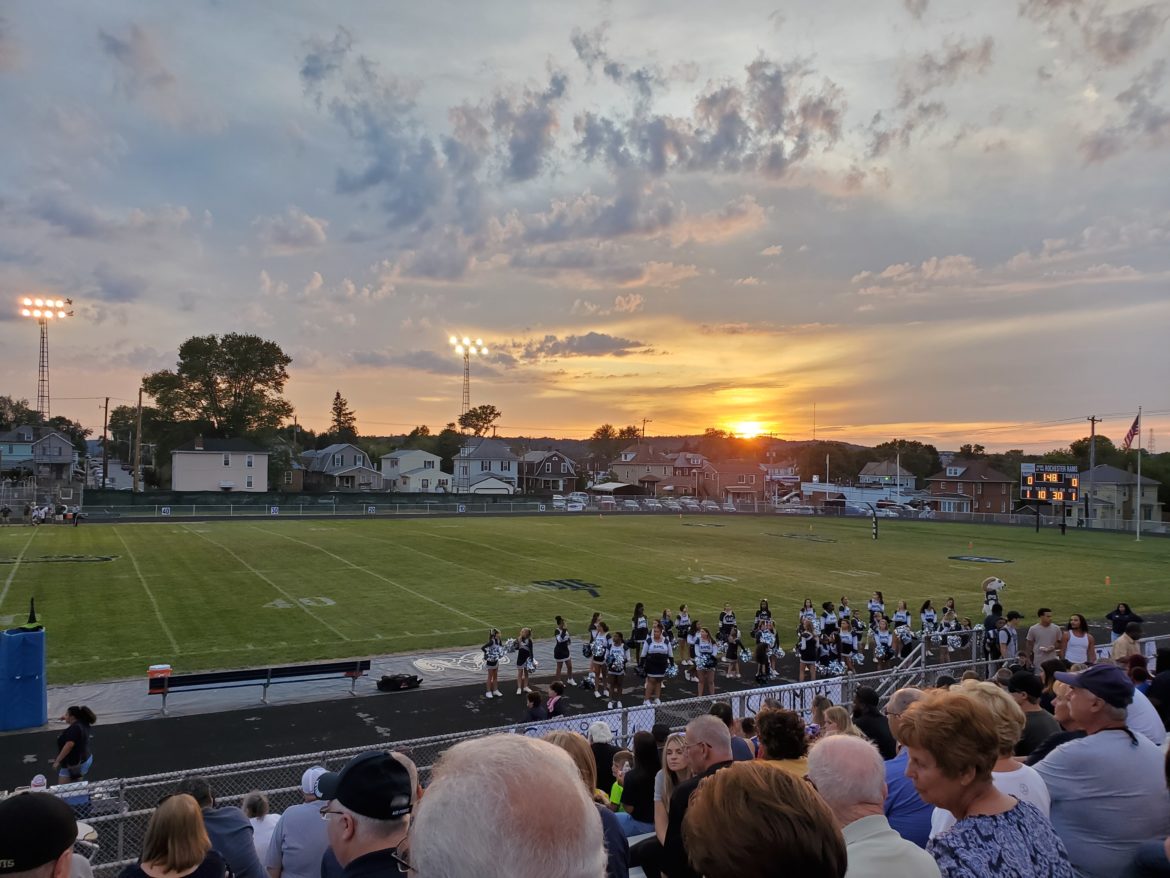 Most of our WPIAL coverage on Steel City Blitz is objective coverage, discussing standings, playoff scenarios, and Games of the Week. This will be something a little different – a first-person account of visiting different towns and stadiums throughout Western Pennsylvania.

Pitched this crazy idea to my wife:

I want to attend a football game at every stadium in the #WPIAL. Shockingly, she gave me the green light with the stipulation I take the kids with me and teach them something about each town as well. Done and done.

The first town we chose to visit was Rochester, located on the east bank of the meeting of the Beaver River (formerly Big Beaver Creek) and the Ohio River. This meeting point (with the town of Beaver on the western bank and Rochester on the eastern side) was a point of connection for native american traders, the Pennsylvania canal system, and eventually the railroads. Rochester has a storied football tradition and was one of the most successful teams in the entire WPIAL in the 2000s.

Originally a Lenape village at the corner of Big Beaver Creek and the Ohio River called Sawcunk. Mingo Indians had a village called “Logan’s Town” after a famous chief and the meeting of the Big Beaver Creek and Ohio River was a rendezvous and trading point for various Native American tribes from the region. Native American artifacts and graves have been found throughout the area. Settled in 1799 by Rev. Francis Reno, an Episcopalian from Washington County and previously Virginia. Rochester high school sits at the corner or Reno Avenue and Virginia Avenue. Lewis and Clark passed Rochester on September 3, 1803. 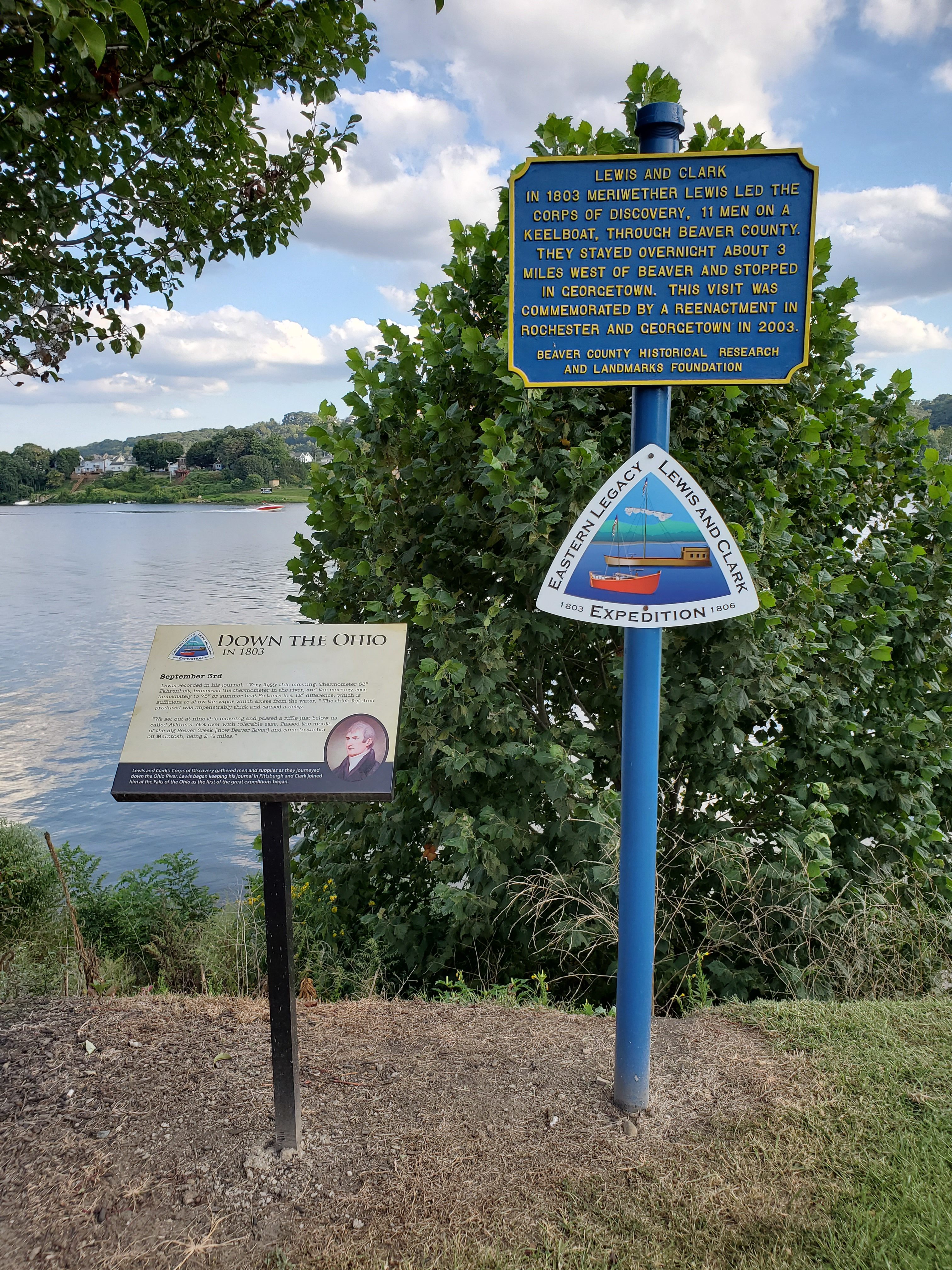 Known as East Bridgewater, Fairport, and Beaver Point before 1834 when Mitchell Hammond, a grocery store owner, began stamping his goods with “Rochester” to denote where they came from. Rochester Borough was officially incorporated under that name in 1849. The bordering Rochester Twp was formed in 1840 from New Sewickley Twp.

The first map of Rochester was laid out by Marcus T.C. Gould called “Pinney’s Plan of Lots in the Borough of Rochester” on December 31, 1851. Gould was also known for authoring the Universal Index and Everybody’s Own Book in 1842, one of the first guides for stenography. He is also credited as the inventor of the fountain pen.

Rochester was initially part of the Pennsylvania Canal system, the point where the East-West canal branched north to take the Big Beaver Creek towards New Castle and Erie. After the advent of railroads, the four main tracks diverged at Rochester (Pittsburgh, Fort Wayne & Chicago, Erie & Pittsburgh, and Cleveland & Pittsburgh). After the Civil War, Henry Clay Fry and associates formed a glass manufacturing company (Rochester Tumbler Company) in 1897. This later became known as the National Glass Company of Rochester which revolutionized glass production by inventing a pressing mold for glass (previously, cut glass had only been blown by hand).

Rochester High School was established in 1890. Their first high school football game was played in 1906. 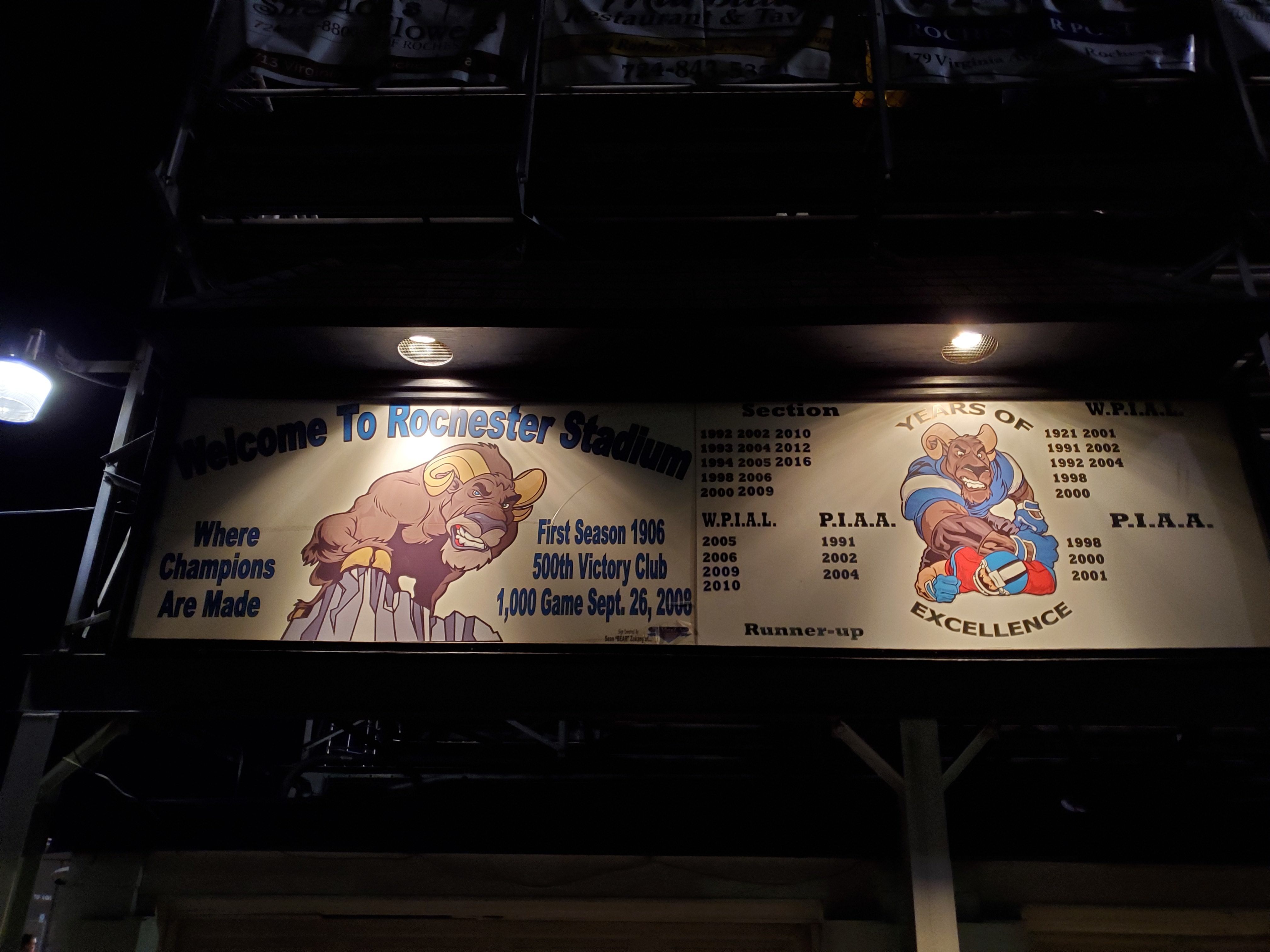 Rochester-Monaca Rivalry “The Battle of the Bridge” 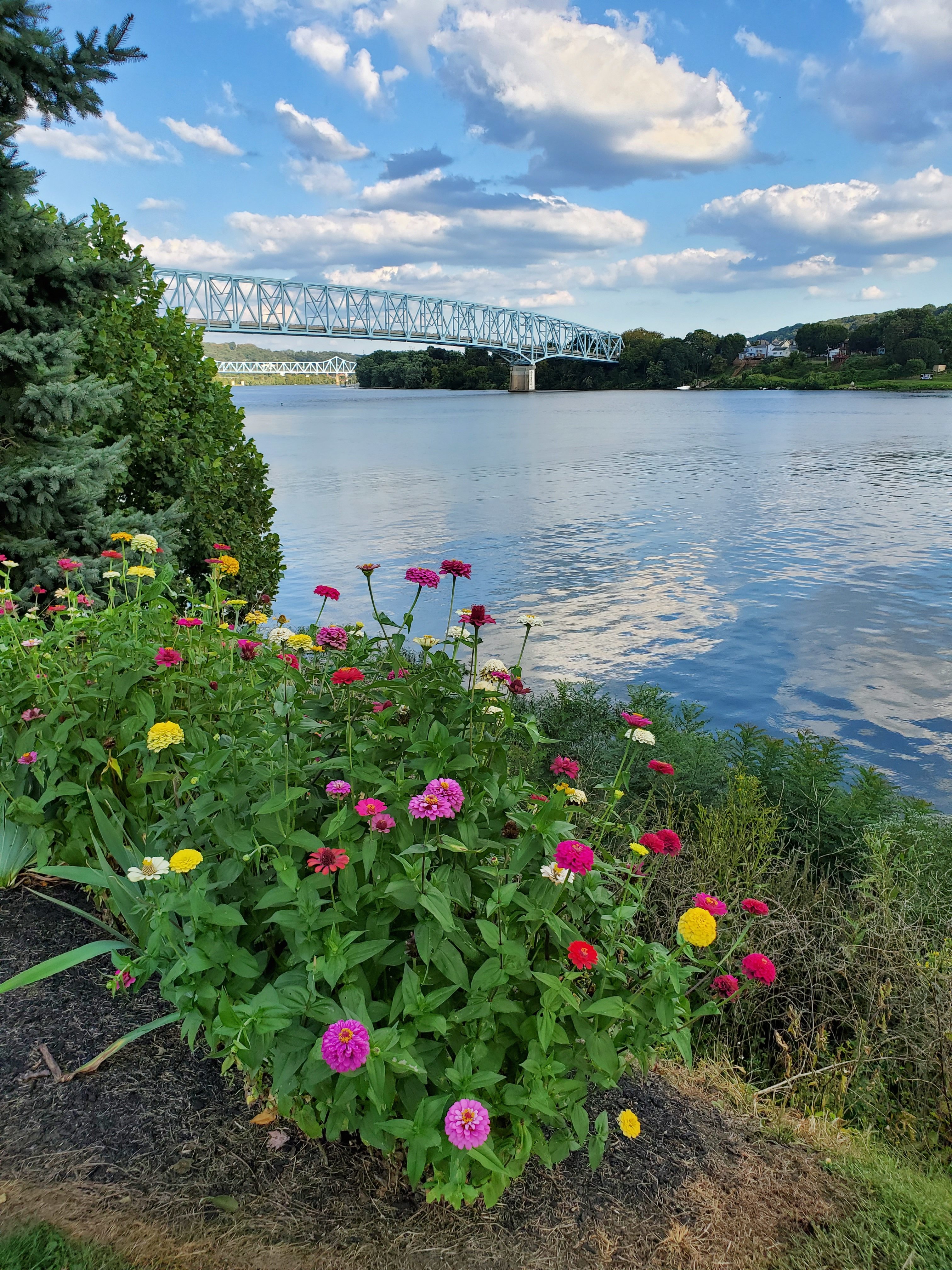 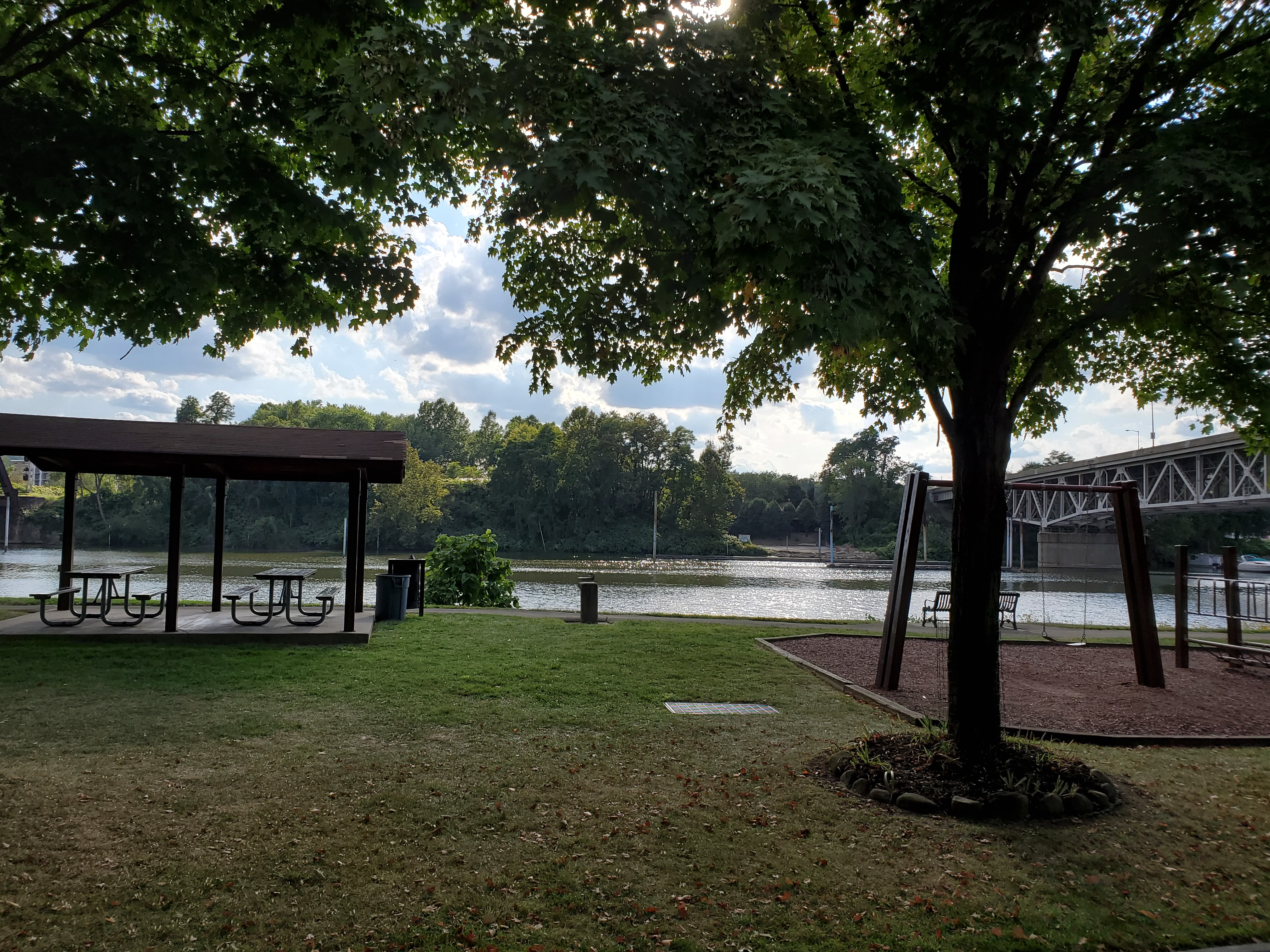 Situated right at the confluence of the Beaver River and Ohio River, Rochester’s Riverfront Park was an absolute gem. There were small walking trails, pavilions for eating, and a small play set for the kids. We were able to walk around and read through the historic placards that told about the history of Rochester and the Beaver River/Ohio River region. Our favorite part of the park was the “Flags Across America” section. Each flag pole had a different iteration of the United States flag with an engraved base telling which states were added to the Union at the time that flag was adopted. Our 8-year old took the time to read through each state in order. 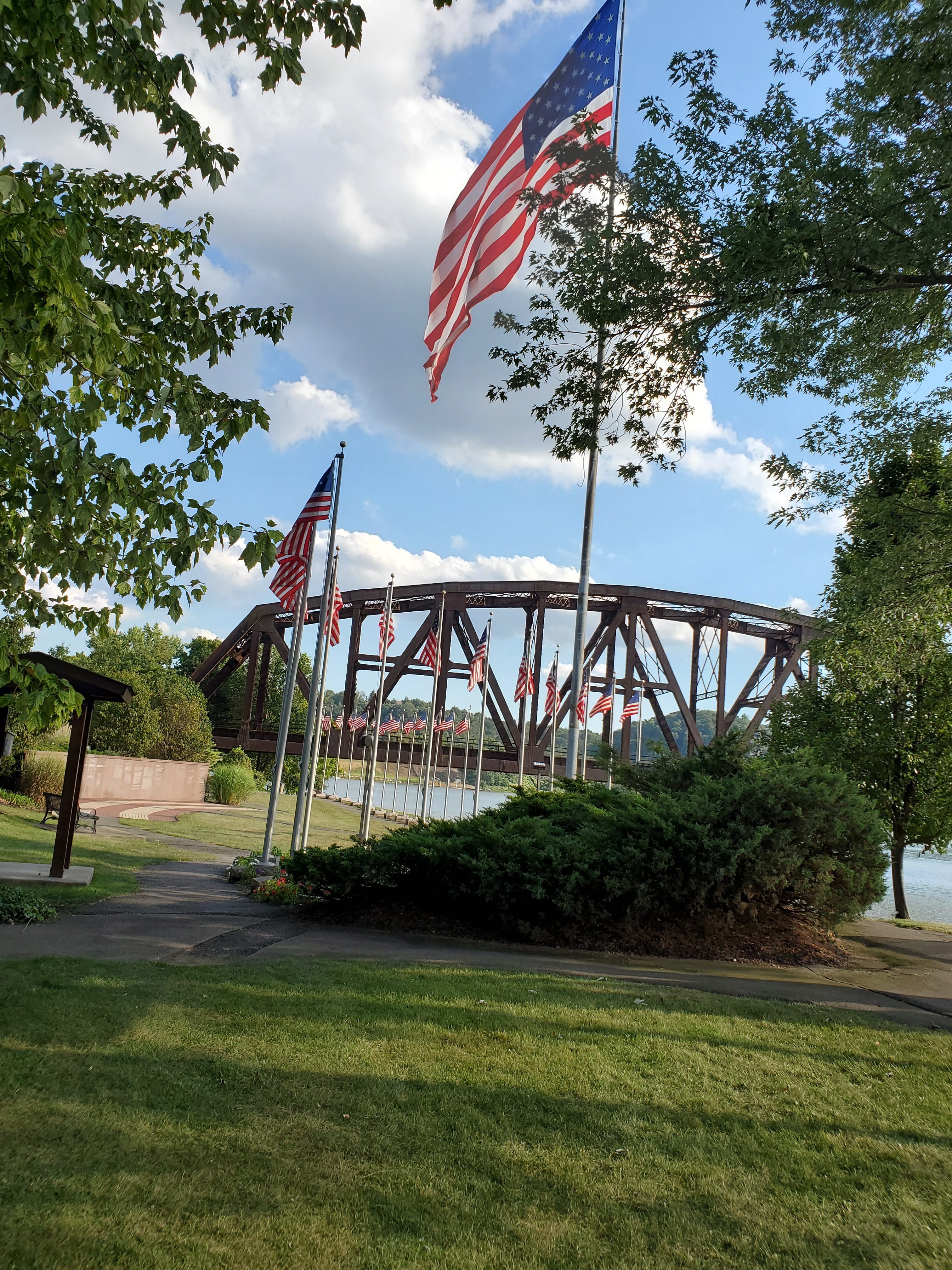 Rochester Stadium is beautifully set with all of the stands on one side of the stadium, facing west. This gave us an incredible view of the sunset over the hills of Beaver County. Rochester still has an all-grass field that was in pristine condition in late August. Before the game, Rochester’s public address announcer gave a nice tribute to Hayden Hamilton. Hayden was a Laurel player who suffered a spinal injury in the game against Rochester last year and is still in a wheel chair. 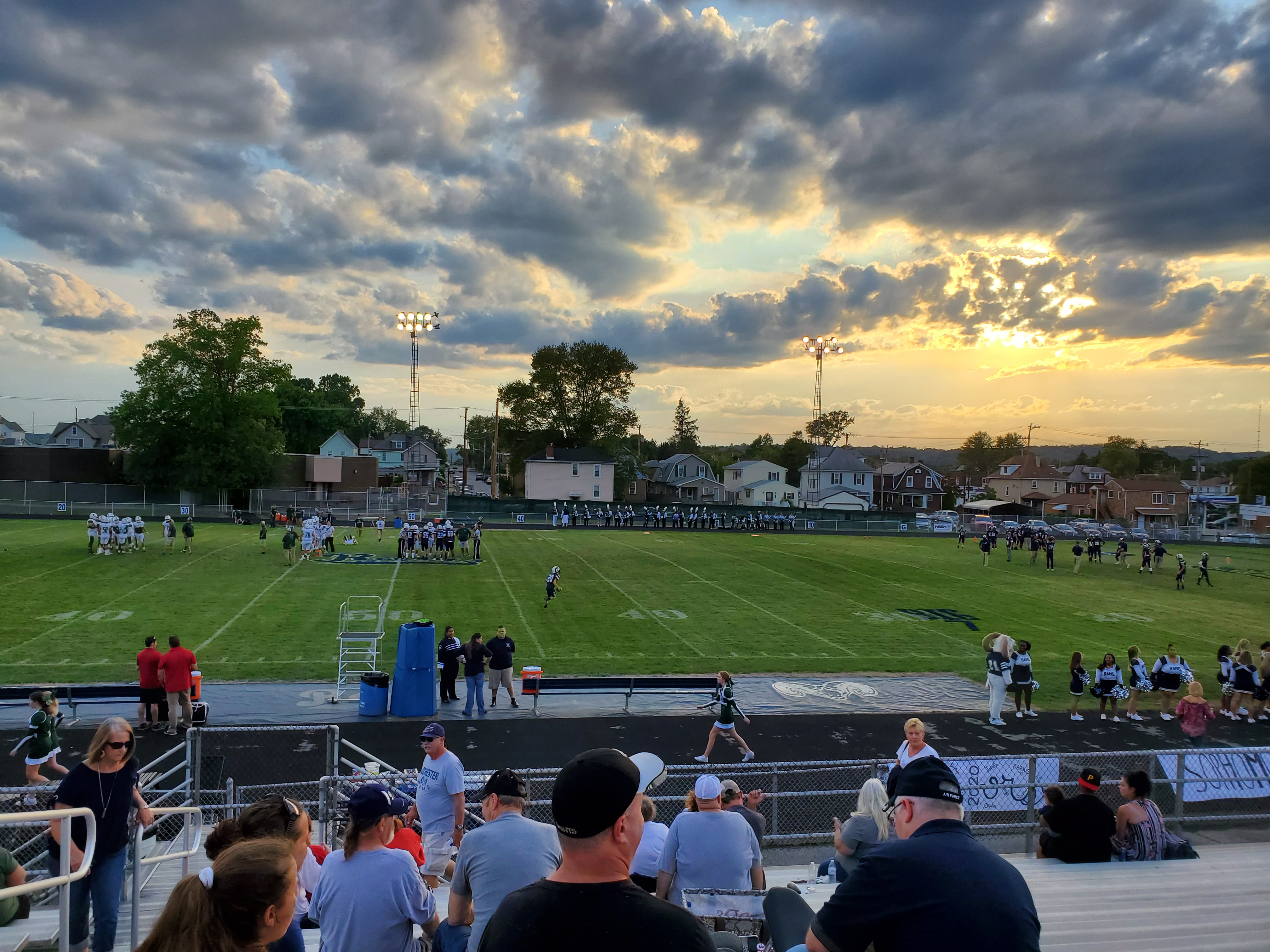 Football is still an intricate to the town. The people sitting around us were mostly older couples who all seemed to know each other. They were all very nice to our kids and understanding of the rambunctiousness of children (including dancing in the aisles). One couple remarked they were waiting to leave for a vacation until after the game. Everyone we interacted with at the game, from the parking attendants to the ticket takers to the concession stand workers along with the people sitting around us were all very friendly and amenable to our family.

As for the game itself, Laurel’s defense dominated in the early going. Rochester tried a deep pass on their first drive which was intercepted. Laurel controlled the field position for much of the first half, but two fumbles in Rochester territory kept the Spartans off the board. After a scoreless first quarter, Rochester moved the ball across midfield and opted to go for it on 4th and 3. After burning a timeout, Laurel’s defense blew up the running play and stripped the ball. Daniel Blank scooped up the ball and scored to take a 7-0 lead. From there both offenses continued to struggle but Laurel was able to add another touchdown before halftime to take a 14-0 lead.

For a 1A school, Laurel had a huge marching band. The Spartan band played a selection of Latin tunes. It was still early in the season so there was a lot more standing than marching. Solid trumpet solo. 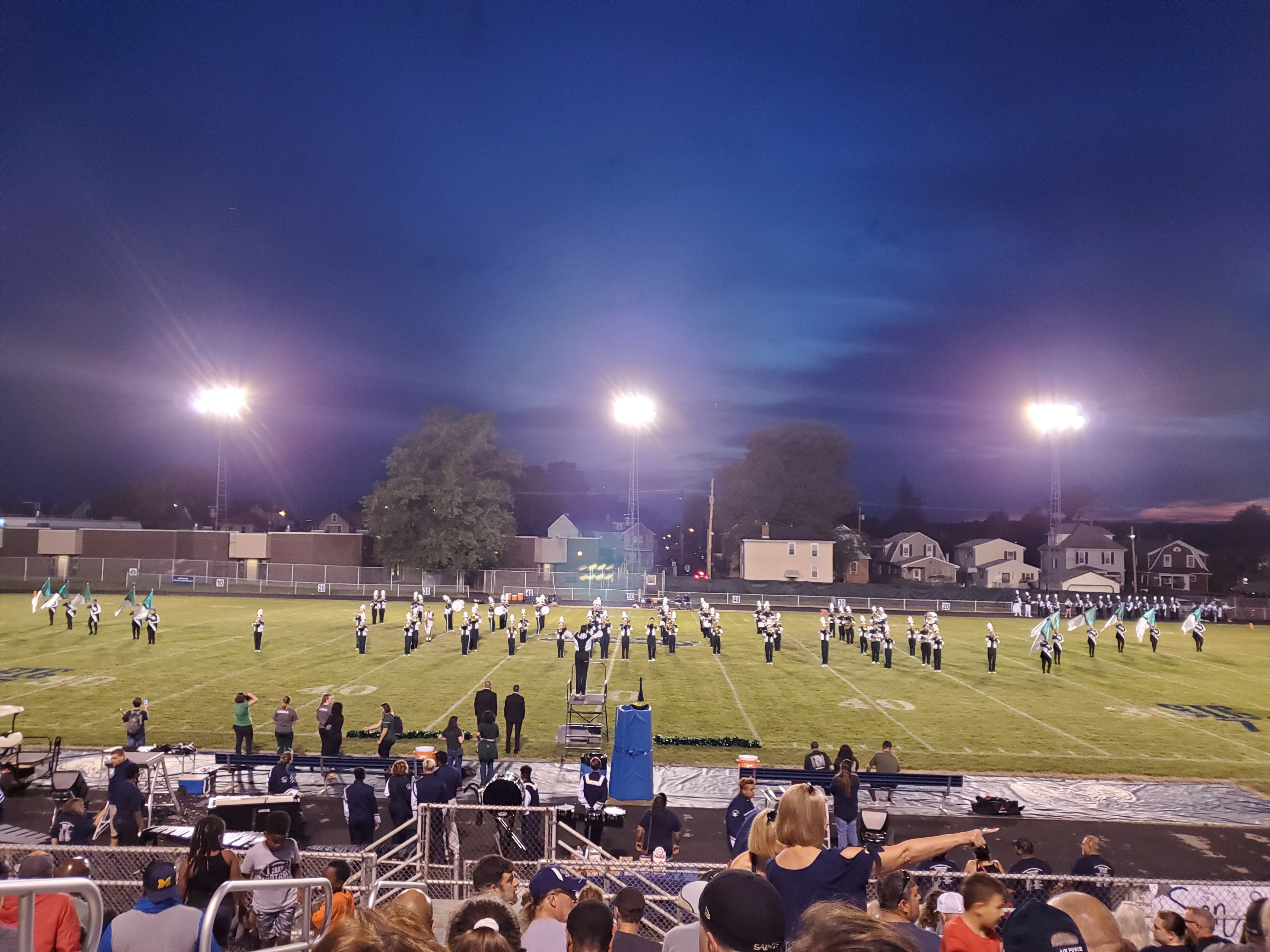 Rochester had a small band but did a lot more marching. I counted about 20 members of the marching band plus 7 more in the pit. The Rams band played selections from The Greatest Showman. 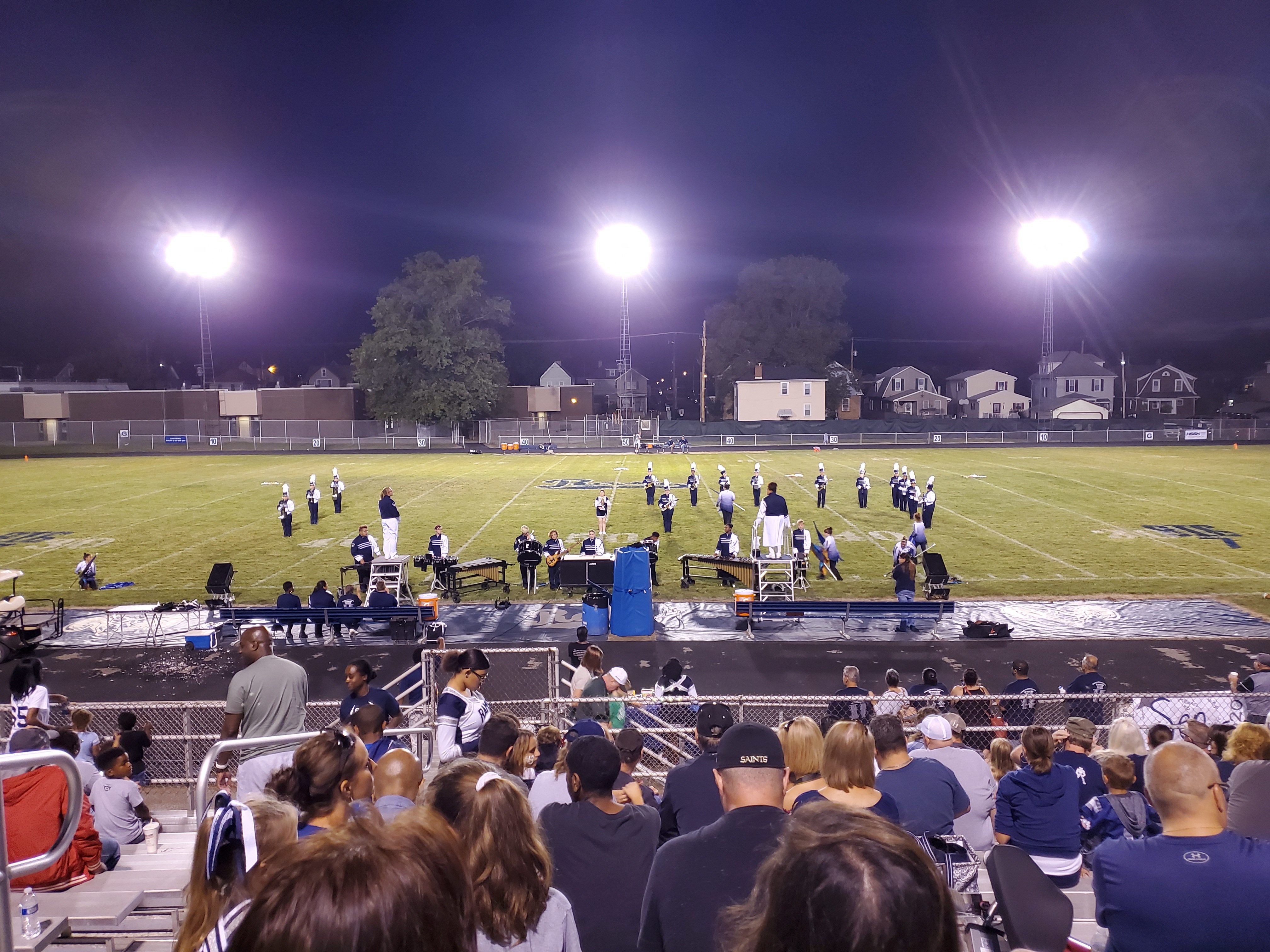 After the half, Daniel Blank once again found the end zone (this time on offense) for a 65-yard score. Laurel would pull away in the second half, racking up 3 touchdowns in the third quarter to enact the mercy rule. The Spartan reserves added another touchdown in the fourth quarter for a 42-0 victory. That was the first win for Laurel over Rochester since 2013. Given that only 2 teams per conference are guaranteed a playoff spot in 1A, this result certainly puts Laurel in position to make a run at the conference title. Rochester is by no means out of it after Week 1, but will have a much smaller margin for error moving forward. Thanks to everyone we met and talked to during our trip. Rochester was a welcoming environment with plenty of unique history to check out! 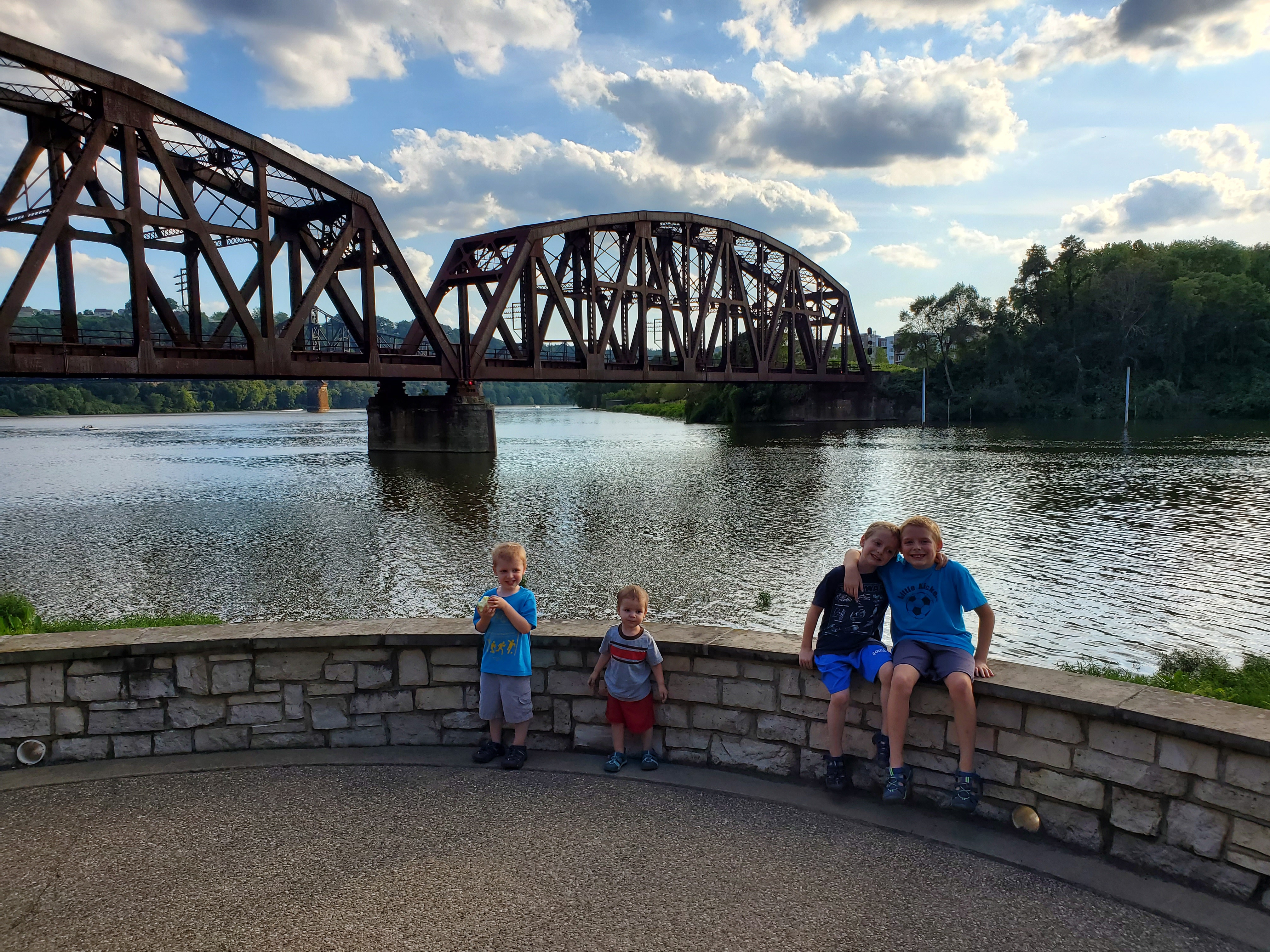 […] throughout Western Pennsylvania. Two years ago I started the Tour of the WPIAL with visits to Rochester,  Southmoreland, and West Greene. Unfortunately we weren’t able to make any visits in 2020 due […]

[…] throughout Western Pennsylvania. Two years ago I started the Tour of the WPIAL with visits to Rochester,  Southmoreland, and West Greene. Unfortunately we weren’t able to make any visits in 2020 due […]