The Pittsburgh Steelers have done their duty and gotten their roster down to the 53 required by the league. They have also signed a practice squad which includes an open spot. As of this writing, the team has not added anyone to the 53-man roster from outside the organization. With this in mind, let me address several things from a very busy weekend across the NFL.

There’s no question that Tuzar Skipper making this roster was both well-deserved and a possible harbinger of things to come. Skipper did everything asked of him on defense and did the exact thing on Special Teams as well. He consistently performed well and that’s why he’s on this team. There is a very good chance that he will see meaningful snaps on Sunday night if Anthony Chickillo can’t go and that possibility is strong right now. Ola Adeniyi is expected to miss a couple of more weeks.

I suppose the biggest surprise of all of the cuts was Eli Rogers. You’ll recall the wide receiver showed up to Training Camp dressed as Bob the Builder indicating he was ready to go to work. I thought Rogers would survive simply because the Steelers like familiarity and because they gave him a new contract. Neither of those things mattered as the Steelers went with just five receivers… Rookie Derwin Gray was cut which wasn’t a surprise and was signed to the Practice Squad. I thought his versatility might give him a chance but it wasn’t to be.

Tweet of the Day… Happy Birthday to my all-time favorite. He’s crazy and says some stupid shit sometimes but he is what he is.

HAPPY BIRTHDAY to our quarterback, Terry Bradshaw!! This man led the Steelers to 4 Super Bowl victories. He had some help along the way. Born in 1968, TB was our guy in the big games. The Blonde Bomber is my 1st string Steeler QB. pic.twitter.com/mIEFv4cruj

Two guys who had really good preseasons were defensive tackle Henry Mondeaux and linebacker Robert Spillane. Both were cut but both were also signed to the Practice Squad. Whether or not either ever make the active roster is unknown but both guys deserve a shot should it come to that. I would also count Trey Edmunds here too. One could argue that he is as deserving as Benny Snell is but because Snell was a high draft pick Edmunds goes to the PS.

When we think of kickers we rarely ever consider that their success depends on a partner. In the case of Chris Boswell, his holder is punter Jordan Berry. When Britton Colquitt was released by Cleveland, many of us immediately hoped the decorated punter would find his way to Pittsburgh. Some of you will remember his father punted for the Steelers in the 1970’s. He would be an immediate upgrade over Berry but… I’m guessing if Boswell wasn’t comfortable with it then it wasn’t gonna happen. Colquitt ended up signing with Minnesota.

After working for about a month the Steelers and Joe Haden came to an agreement on a two-year extension worth $22 million. Haden will receive over $16 million in guaranteed money and he’s now tied to the Steelers through 2021. If stays healthy this will be a great deal. Haden does not run as well as he did but he still has terrific athleticism and smarts. With this out of the way, look for the Steelers to continue making changes to the roster. 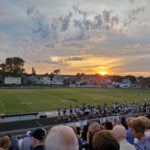