The Houston Oilers were big AFC Central rivals back in the decade that saw the Pittsburgh Steelers win four Super Bowls over a six year span. At the end of the 1998 season, the Oilers moved to Nashville and became the Tennessee Titans leaving Houston without an NFL team.

The city of Houston was granted a new franchise in 1999 at a cost of $1 billion and the team became the Texans. The Steelers own a 4-2 record over the Texans with the last game played three years ago when the Steelers rolled over their opponents 34-6.

In 2002, the Texans’ first year in the league, they traveled to Pittsburgh and surprisingly beat the Steelers.

The (7-4-1) Steelers were obviously heavily favored, but anyone who took the -13.5 points would have been stunned to see the (3-9) Texans leave Pittsburgh with a 24-6 win.

The Texans had 47 yards of total offense while their quarterback David Carr was sacked (4) more times than he completed passes (3), but they completely endorsed the premise that good defense wins games if not championships.

For the Steelers, Tommy Maddox had a nightmare of a game that would have surely haunted him for a long time. His two interceptions and a fumble were all taken back by the Texans for touchdowns of 70, 65 and 40 yards. The magic of Touchdown Tommy had vanished while he briefly auditioned as Turnover Tommy. as as simple as three plays,” Maddox confessed. “False starts, penalties, they don’t kill you. What kills you is turning the ball over and giving them touchdowns.”

His sad performance opened the Kordell Stewart quarterback debate again although Coach Bill Cowher was quick to confirm Maddox as the team’s starter for their next game. That season, Maddox led the team to a 10-5-1 finish and into the playoffs where they were edged out 34-31 in the divisional round by the Tennessee Titans.

The Steelers won both the next two games against the Texans which were played at Heinz Field with Ben Roethlisberger at the helm.

In 2008 Roethlisberger threw for two touchdowns while Willie Parker added three touchdowns on the ground to carry the Steelers to a 38-17 win. 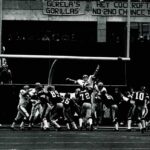