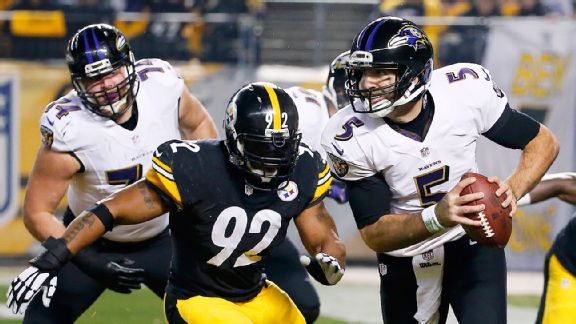 The greatest rivalry in the National Football League will take center stage on Christmas Sunday this coming weekend. At stake is the AFC North Division title and a playoff berth. It’s everything we’ve come to expect from this rivalry. I’m taking a different look at it however by just diving into the numbers to see what they reveal.

The Steelers lead the all-time series 24-21.

The Ravens have won four straight and nine of the last 12 overall.

Since the series began in 1996, each team has won two Super Bowls. The Steelers have been to three overall since ’96.

Ben Roethlisberger is 9-9 in 18 career regular season games against Baltimore. He is 2-1 in the postseason. He has 28 career touchdown passes and 19 interceptions.

Steelers’ Head Coach Mike Tomlin has 10 career wins against the Ravens dating back to his first year in 2007. Ravens’ Head Coach John Harbaugh was the coach in nine of those games. Harbaugh currently has 11 wins over Mike Tomlin however.

Since the Tomlin-Harbaugh era started in 2008, three games have gone into overtime. 15 of their 20 career games against one another have been settled by seven points or less.

The Steelers have dropped their last 2 contests against the Ravens in Heinz Field. The last win was in November of 2014 where Ben Roethlisberger threw six touchdown passes.

The Steelers will be wearing their all-black color rush uniforms for the first time ever on Christmas Day.

Antonio Brown has 64 career receptions on 109 targets against the Ravens. He has just two career touchdown catches against them as well. He has only gone over 100 yards receiving twice in 12 career regular season games against them.

The Steelers are fifth in the NFL in ‘passing big plays’ with 33. The Ravens are 20th with 24.

Ben Roethlisberger is 68-22 all-time at home in Heinz Field. That’s a winning percentage of 75%.

Let’s hope that number stays in our favor.

‘Nail the Number’ Final Week! Someone Will Win!!