I say “hold your breath” because both Stephon Tuitt and Ladarius Green have injuries that will require some patience on our part as fans. Tuitt had an MRI on Monday and while rumors circulated about it being a sprain we’ll see. Even a sprain will likely keep him out Sunday. As for Green, he is in concussion protocol. We may not know anything until Thursday or Friday at th earliest.

Today being Tuesday that means the players are off and Head Coach Mike Tomlin will host his weekly press conference. Catch it live at Noon ET on Steelers.com or at ROOT SPORTS.

‘Nail the Number’ will be unveiled tomorrow. All I can tell you is that this is going to be awesome.

It isn’t quite a guarantee but Marcus Gilbert came pretty close with this comment. “This game is going to be ours, it’s at our field.”

Pretty incredible but Arthur Moats had just three total snaps Sunday. Jarvis Jones had ZERO on defense. James Harrison played EVERY snap on defense as did Bud Dupree. Pretty incredible how the outside linebacker rotation is no longer a rotation huh?

As we come up on the final push for Batch A Toys we receivd a much needed unexpectd blessing from Lindy Paving. Big THANK U 2 Jason&his team pic.twitter.com/5rNow679X7

I had the opportunity this week to be part of someone else’s generous act. I’m grateful I was asked to take part because now two people get to go see the Steelers on Christmas Day against the Ravens. There really are great and deserving people out there despite all the crap we deal with in this world.

Make sure you are following our Facebook page. Our media guru Ryan is killing it with his video clips.

As great as the collision was between David DeCastro and he who shall be nameless, the Lawrence Timmons’ stonewall of Jeremy Hill was incredible.

Check out my two postgame pieces from Sunday and Monday. 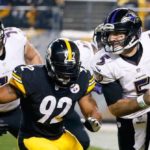