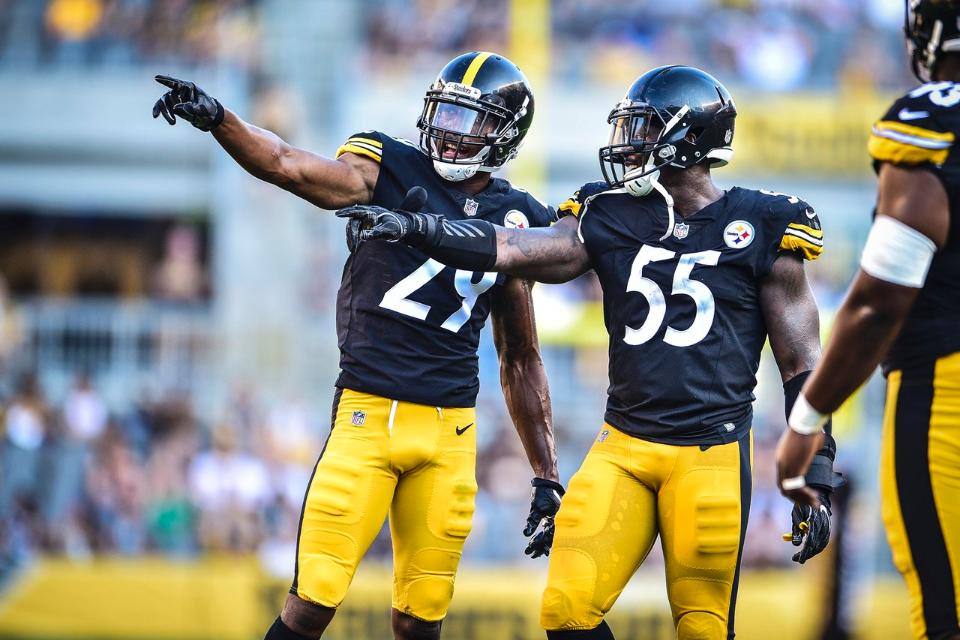 The Steelers are (thankfully) halfway through the 2017 preseason. Training camp at St Vincent College has finished and they are now back in their South Side facilities for the rest of the season. The third week of the preseason is typically when they go through the exercise of installing a game plan and simulating a “game week.” The key starters will likely see some game action this week as well. This year, the NFL did away with the first roster cut down from 90 to 75 players after the third preseason game. There will only be one roster cut this year, from 90 down to 53 players, on September 4.  This leaves two games for players to make their final impression on the coaching staff and state their case for the last few roster spots.

Due to a variety of factors such as contract status or draft pick investment, there are 41 players that should feel confident that their roster spots are secure. The only thing that could bump one of these players off the roster would be a significant injury (in which case they would land on IR) or if the Steelers trade for a player or sign someone off waivers. These 41 “roster locks” are:

This leaves 12 spots remaining on the 53-man roster. Some of those spots will be filled by players at a certain position. For example, the Steelers generally keep at least 3 running backs and like to keep 9 offensive linemen. Prevailing thinking is that the Steelers will keep 6 wide receivers this year, but the last few roster spots always come down to special teams. Here is a look at the position battles at the halfway point in the preseason:

The Steelers brought in Knile Davis on a one-year free agent contract to challenge for a backup running back position. To date, he has been unable to unseat Fitzgerald Toussaint. Much to the chagrin of the Steelers twitterverse, Toussaint has still appeared on the first kickoff return team (alongside Davis) and has been given first team reps in practice and in games ahead of Davis. To borrow a Mike Tomlinism, Toussaint is what he is. He is a one-cut runner who is going to hit the hole but isn’t going to create much after contact. Davis has displayed some shiftiness and maneuverability, but almost to a fault. When he has gotten the opportunity, he has tried to do too many things and winds up dancing himself into a corner for minimal yardage. Terrell Watson looks like a practice squad candidate after a strong second half performance against the Giants. Trey Williams’ punt return against the Falcons made him a name to keep an eye on for future considerations.

The wide receiver breakdown has been the most talked about position battle throughout the offseason. With the return of Martavis Bryant, the signing of Justin Hunter, and the drafting of JuJu Smith-Schuster the Steelers are absolutely loaded at receiver. The top three spots are guaranteed and the common consensus is that the Steelers will keep 6 receivers on the roster. Six players are battling for those three spots.

Darrius Heyward-Bey and Eli Rogers seem to have an advantage based on their abilities on special teams. DHB is arguably the Steelers best special teams player and is capable enough at WR if needed. Eli Rogers is still listed as the team’s primary punt returner and if he holds on to that spot, plus the slot WR role, he can feel good about his chances to make the roster. Demarcus Ayers looked good in the slot role when he was called up from the practice squad last year but he has been injured in training camp and may wind up on the practice squad again. Cobi Hamilton doesn’t have blazing speed but has great hands and is able to locate the ball in traffic. Hamilton is a solid receiver who could be the #1 WR for the Jets but there may not be room for him on the Steelers roster.

This brings us to Sammie Coates and Justin Hunter. Coates had five great games and ten terrible games last season (after he broke his fingers). He had offseason knee surgery and just returned to game action this week. Justin Hunter signed a veteran minimum contract this offseason and has reportedly performed well in camp, but he does not play special teams. Coates continued to play on special teams last season after he broke his hand, which may give him a slight advantage for the last roster spot.

Of all the positions listed where the Steelers may opt not to keep a player, offensive line is the prime candidate. They have rolled with 8 offensive linemen before. While it is not ideal, none of these four have been overly impressive and all have practice squad eligibility. Feiler has been the best of the group and started at LG against the Falcons with Ramon Foster out. Friend has been decent as a backup center but the third string offensive line has been porous as a whole. That group includes Mihalik and Cooper. The Steelers may opt to stash their 9th lineman on the practice squad, which would enable them to keep an extra player at another position.

The Steelers will likely only dress 5 defensive linemen on gameday, but keep 6 on the roster in the event of injury. Dan McCullers is the incumbent but has not produced much of anything in the preseason. Roy Philon came up with a sack against the Faclson and Johnny Maxey has shown the ability to get some push on occasion. At the end of the day, any of these three could be easily replaced by a player from waivers. The door is still wide open for any of them to earn a roster spot, but none have particularly stood out.

While some position battles are a race to see who can make fewer mistakes, the outside linebacker battle is raging fiercely with good play. In the preseason opener, Arthur Moats recorded three sacks. In Week 2 against Atlanta, Anthony Chickillo recorded two. Both players are veterans who have been around the team for a few seasons. With Dupree, Harrison and Watt ahead of them, only one may make the roster. Both are capable special teams players who are willing to do anything to help the team win. This has been one of the most exciting battles so far and is neck-and-neck heading down the stretch. The Steelers are not in a salary cap bind, but if a move needs to be made to create cap space, Moats makes $2.25 million and Chickillo just $615,000.

Fort and Johnson have both been around the team for the last few seasons. Both have been quality special teams players and have flashed at times in the preseason. The Steelers will certainly keep 4 inside linebackers. The Steelers rarely keep 10 linebackers so the question becomes whether the 9th linebacker is an inside or outside backer. Both Fort and Johnson are capable special teams players who can contribute but will need to show they are able to handle the routine assignments on defense as well. Last season, Fort appeared in 14 games and played 42 defensive snaps while Johnson appeared in just 6 games and played no defensive snaps.

Mike Hilton was everyone’s camp phenom and he has backed it up with his play on the field. Hilton has been used in the slot corner role and has excelled in the first two games. He has made noticeable contributions and always seems to be around the ball. The Steelers signed Coty Sensabaugh in free agency to add another veteran presence to the secondary. Time is running out on Senquez Golson. The former second-round pick has been on the field for all of two practices in his entire NFL career. He is still practice squad eligible because he has never actually appeared in a game. Brian Allen was a fifth round pick this year and has a shot to make the roster basted on special teams play. He has had his ups and downs through training camp and the two preseason games so far.

Dangerfield made the Steelers roster last season after a few years on preseason rosters and practice squads. He had two interceptions last week against the Falcons and certainly has the inside track for the fourth safety position. Dangerfield is a downhill player that is solid against the run but a liability in coverage. He is a very good special teams player which also adds value to his inclusion on the roster. Hagen has spent time on the practice squad last season and has played beside Dangerfield with the second team defense.

In total, that is 28 players battling for 12 roster spots. Only 11 positions were identified in the breakdown above, which leaves one extra spot. The Steelers generally keep 9 linebackers, but it is hard to say whether they will keep a fifth inside backer or outside backer. Injuries and special teams play will be a factor in that decision. The Steelers are lucky. Right now, they are mostly healthy with the exception of a few bumps and bruises. It is worth noting that each of the last few seasons the Steelers have made a roster move to sign a player that was cut by another team after training camp. They could go this route again to improve some of their positional depth, particularly at TE, ILB, or Safety.