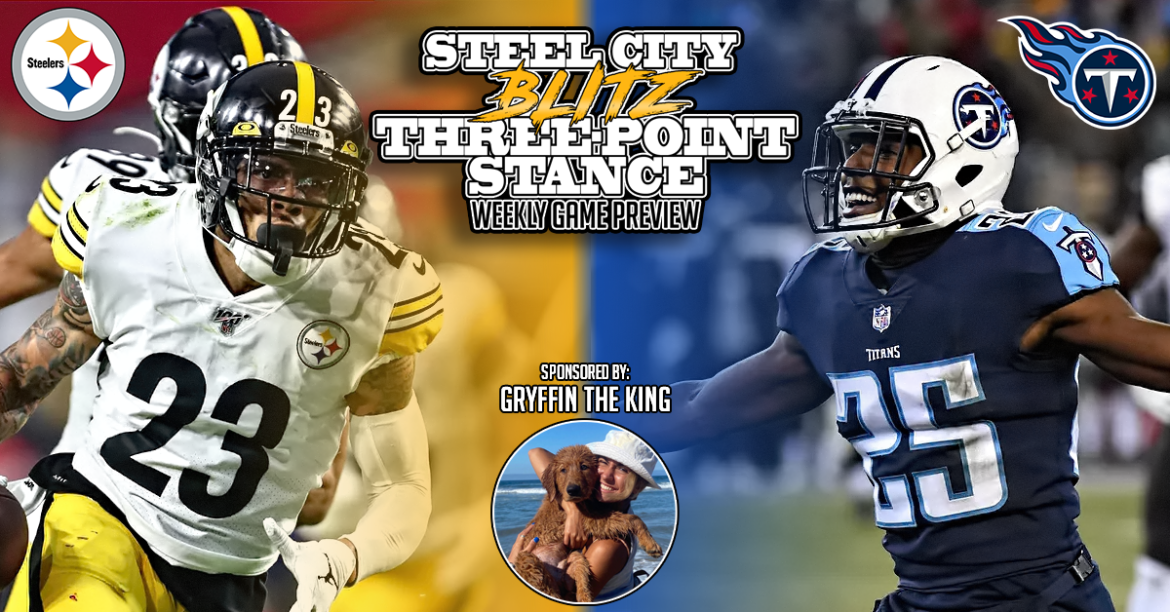 This is the Steel City Blitz Three-Point Stance. Your quick-hitting reference guide to everything you need to know about the Pittsburgh Steelers and Tennessee Titans in this week 7 matchup. The TPS is sponsored by Gryffin the King!

What: Pittsburgh Steelers 5-0 at Tennessee Titans 5-0

Head Official: Shawn Hochuli. This is Hochuli’s third season as a head referee. He is the son of former referee Ed Hochuli. Last season he officiated the Steelers’ 16-10 loss to the New York Jets in Week 16. There were seven total accepted penalties in that game. Oddly enough he did not have any Steelers’ games during his first year as a referee.

This Week in the AFC North: Cleveland at Cincinnati 1pm, Baltimore BYE

What’s at Stake: It’s still early but a loss here puts the loser behind the 8-ball in terms of gaining home-field advantage and the all important number one seed. Keep in mind that only the top seed receives a BYE now in the postseason. Each of the teams had their BYE week in week four so a week off after such a long run of games would be most important.

Stop Before He Starts. If you stop a snowball rolling downhill as it starts, it’s fairly easy. If you try to stop it once it’s halfway down the mountain then let me just say, “good luck with that.” The same principle holds true with Titans’ running back Derrick Henry. If the Steelers allow him to get up to speed and into the second level then they’re in trouble. They have to get to him before he can gain any momentum. The good news here is that the Steelers lead the league in tackles for loss which means they are getting the penetration necessary to disrupt teams from running the ball well. What Keith Butler has to be cautious of is screen passes and delays that try to bait his defense up field too quickly. Stopping Henry and getting a lead changes the entire plan for the Titans on offense.

Speaking of Getting a Lead. There are some games where getting out to an early lead is no big deal. There are other games like this one Sunday where getting out to a two-score lead could be paramount to the Steelers’ success. If Tennessee is consistently playing catch-up then that works in the Steelers’ favor. It forces the to abandon the run quicker puts more pressure on Ryan Tannehill to have make plays. I don’t think Randy Fichtner will change up much from what he’s been doing which is find balance and establish a running game. But… Don’t be surprised if Big Ben takes a few deep shots to get his team out front early.

Win the Individual Matchups: Every week in the NFL, games often come down to various one-on-one matchups. This week will be no different but due to injuries, some of these are under the microscope even more. Mike Hilton is out, which means Keith Butler will look to Cam Sutton to fill that role. How will he handle covering those slot receivers and tight ends? Can he support the run as well as Hilton does? Next up is Robert Spillane who must build on his two quarters of solid work against a much different animal. Can he take on those lead blockers for Derrick Henry? Can he hang with Jonnu Smith in coverage? Offensively, pay special attention to those wide receiving matchups. Ben Roethlisberger has his full compliment of receivers back with the return of Diontae Johnson so look for Big Ben to expose the mismatches.

Prediction: Ryan Tannehill is a much better quarterback now than he was in Miami. That said, if he doesn’t have Henry running the ball consistently well then he’s in trouble against the Steelers’ pass rush. That’s exactly the gameplan Keith Butler typically deploys week to week but Sunday it will carry extra significance. Don’t be surprised if the Steelers find success offensively. The Tennessee defense is good, but they’re giving up a lot of points and they haven’t seen an offense this dynamic yet. Pittsburgh hits the road for the very first time since week one so that’ll be a different feel for the Black and Gold but I just have a feeling this goes our way.