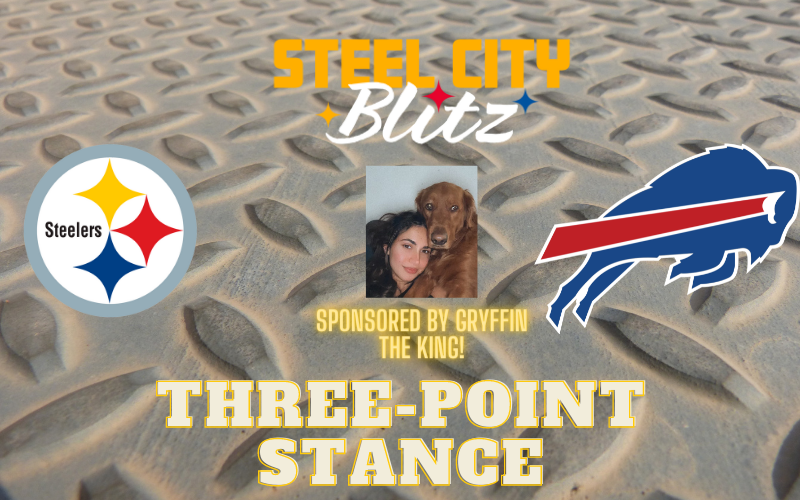 Week five has arrived and with it begins a four-game gauntlet of hell for the Pittsburgh Steelers. First stop? Buffalo. Here’s everything you need to know about the Steelers and the Bills!

What: Pittsburgh Steelers 1-3 at Buffalo Bills 3-1

Weather: 58 degrees and sunny at kickoff

Last Week: The Bills rallied from 20-3 down to beat the Ravens in Baltimore 21-20. The Steelers meanwhile blew a 10-point fourth quarter lead in losing to the Jets in Pittsburgh 24-20.

TV Coverage in Your Area: Much of the country will get the game. Check out 506sports.com to see if you’re in luck!

Head Official:  John Hussey. He’s a sales representative who attended Idaho State University. He’s in his eighth season as a head official and has not called a Steelers’ game since last season’s opener in Buffalo. There were 13 accepted penalties in that contest with 8 committed by the Bills.

Injury Notes: The Bills are no doubt banged up but the Steelers aren’t exactly healthy. While Witherspoon is the only one “out” there are several guys that will be literally a play away from exiting the game. This game could evolve into a battle of attrition.

UPDATE: Terrell Edmunds has been ruled OUT for today’s game.

This Week in the AFC North: LA Chargers at Cleveland 1pmET, Cincinnati at Baltimore 820pmET

What You Need to Know: Sunday’s meeting marks the fourth straight year the two teams play each other with three of the four being in Buffalo… Mike Tomlin is 5-2 all-time against the Bills but is 1-2 against Sean McDermott… The Steelers are now 0-7 in games when T.J. Watt misses due to injury… Pittsburgh is 25-10 all-time when starting a rookie quarterback. That’s the seventh most victories by a team since the 1970 merger… The Steelers and Bills have each been penalized 24 times this season… Pittsburgh has punted 21 times through four games while the Bills have punted just seven… The Steelers are 5-13-1 on the road when a QB makes his first career start for them.

What’s at Stake: Buffalo will look to keep pace in the AFC East with Miami while the Steelers will try to avoid losing their fourth straight game.

1. Create Mistakes. As good as Josh Allen is there are moments when he’ll force throws and force plays in general. The Steelers have to take advantage of those moments. When he’s on the run, he needs to be punished. When he hangs in the pocket, there has to be pressure. If the Steelers can come with just turnovers at his his expense, easier said than done, and convert them into scores then I think they can make this a game.

2. Balance. Anyone that believes Kenny Pickett is going to come into Highmark Stadium against one of the top defenses and throw for 300 yards and three scores is kidding themselves. Nothing would surprise me these days but we need to live in reality. Matt Canada has to run the ball in order to keep pass rushers off of Pickett long enough for him to deliver the ball. The Bills’ secondary is banged up so play-action could be used to keep guys who don’t play as often off balance.

3. Special Teams Do Something! When your offense and defense are not exactly tearing it up, you have to have some help from your special teams’ units. With Steven Sims in for Gunner Olszewski as the return man, this is a prime opportunity to get a big return. At the same time, a punt block or a fake punt would be welcome in order to give the Steelers a short field or continue a drive. Danny Smith’s crew is overdue for such a play.

Prediction: I have total confidence in Pickett who has proven no stage is too big for him. Playing in Buffalo will be a different story however. That said, the Bills are coming off back-to-back road games against Miami and Baltimore. Are they primed for a let down? The spread in this game is one of the biggest the Steelers have faced in the last 50 years and Mike Tomlin typically does well as a big underdog. Still, this team is facing a juggernaut in the Bills and I expect the game to go their way but the Steelers cover.

SCB Steelers Quick Hitters: The ‘It Could Be Worse’ Edition