The Pittsburgh Steelers and Kansas City Chiefs meet in the AFC Divisional playoff! Steel City Blitz provides everything you need to know for the game and offers insight and keys to a Steelers’ victory as well.

Last Week: Chiefs were on the Bye. Steelers defeated the Dolphins in the Wild-Card Game 30-12.

What You Need to Know: All-time, Chiefs Head Coach Andy Reid is 19-3 following a bye week… The Steelers are 15-9 all-time in the Divisional round of the playoffs and are 3-7 in road games… They have won four of their last five Divisional Round games… Ben Roethlisberger is 5-1 all-time versus the Chiefs.

What’s at Stake: A victory sends the winner to either New England or to their own stadium. A loss ends the season.

Dominate Trench Warfare. It’s a very easy thing to point to but I will here in this case. If the Steelers can control the lines of scrimmage on both offense and defense as they did in the October match-up, I see no reason they won’t leave Kansas City with a win. There are other factors as well, but this is key in my mind. The weather is supposed to be ugly. Ice, wind, you name it is expected. What I expect is to see the Steelers impose their will as only they can and that will start with the offensive line. They must communicate well and finish off blocks as they did last week. Defensively, the D-Line and linebackers have to control the LOS with both quickness and strength and force the Chiefs to do things they aren’t comfortable doing.

Danny Smith: This Is Your Job. I’m no fan of Steelers’ Special Teams’ Coordinator Danny Smith. I suggested last year that he should have been fired and I’m suggesting it again now. Regardless, he’s the guy in control of this unit on Sunday and if he doesn’t have the best game of his career then the Steelers could be in huge trouble. First of all, Tyreek Hill cannot be allowed any type of return. If Chris Boswell can’t kick it out of the end zone then I suggest a high pop-up that forces a Chiefs’ player to fair catch it. If that’s at the 30 yard line, so be it. In the punting game, Jordan Berry has proven he can directionally kick the football so I’m strongly advocating he do that again here. If Tomlin is going to allow Hill touches on PR then at least pin him into the sideline. I’m dead serious when I say that special teams could very well cost this team on Sunday.

Take Care of the Ball. We can talk until the cows come home about Ben Roethlisberger’s two interceptions on Sunday. Should he have been in the game for the second one? Why was a pass called anyway? Did Demarcus Ayers run the wrong route? None of that matters. What matters is taking care of the damn ball period. Kansas City is not a great defense statistically, but they force turnovers. If the Steelers do that, they are in trouble. Big Ben has to be judicious with his throws and he has to make sure he hangs on to the ball in pocket as well against some solid pass rushers. Despite the turnovers last week, the Steelers still managed to be on the plus-side. They won’t be as fortunate this week if they aren’t careful.

Not gonna lie… The Steelers on the road always concerns me but they’ve proven to be better down the stretch this season. The earlier match-up means little to me in terms of outcome. Both teams are different and have grown in different ways. Obviously Andy Reid is very good with a week to prepare and that can’t be dismissed. When I look at the talent however, I see no reason why the Steelers can’t win this game. If they don’t, I believe it will be self-inflicted more than anything. I have optimism however… 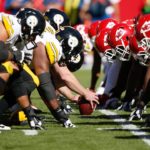 I feel that the key to victory is winning the turn-over battle or at worst keeping it close. And keeping a close eye on Kelce wouldn’t hurt either. GO STEELERS!!!!!