Yesterday’s loss was a punch right in the gut. It’s how I felt watching that field goal slide past the left upright. The defense played its collective ass off and deserved a better fate. Was it a perfect defensive performance? Of course not but when you get five sacks and three turnovers then you’re doing a pretty damn good job. I laid out my thoughts on the game late yesterday but I’ve got a lot more things to discuss today.

Where to begin…. I do not fault Fichtner 100% for Jaylen Samuels’ ill-advised throw in the first quarter yesterday. Samuels has to know when to give up and live to play another day. That said, he should have never been in that position. Fichtner’s first quarter gameplan reminded me of a high school play-caller. He almost immediately went back to what worked against the Bengals and while you can do that to a small degree you can’t to the extent Fichtner did with the ‘wildcat.’ NFL defenses are different week to week and what works one game doesn’t always work the next. To be fair to Fichtner, I thought he did a nice job once Devlin Hodges entered the game but overall I’m still not sold on him as our future OC.

This is probably going to fall in the minority opinion but I do not believe Earl Thomas should have been ejected for his knockout hit on Mason Rudolph. I do believe it deserved a 15-yard penalty which it received but I also think the only reason the flag was thrown was because the official saw Rudolph was out cold. I’ve watched the play many, many times and I do not believe Thomas leads with his head. Should he have been aiming lower? Absolutely but this hit wasn’t in the same neighborhood as Vontaze Burfict let’s put it that way. The one argument I don’t have an answer to is him leaving his feet. That I could easily buy as a reason for ejection.

Tweet of the Day… This is an excellent tweet and should force any Steelers’ fan to take off their Black and Gold glasses for a moment. There were many calls that favored the Steelers yesterday too.

Yes, the rough call on Ola was bad… just as bad as the one on Pierce earlier in the game… and the Bush interception and Johnson fumble…

It was bad both ways. Steelers got plenty of home cooking yesterday.

JuJu on That Fumble

Two things here… First, if any player wants to be great then you they don’t make crucial mistakes in crunch time. JuJu has done that twice now in the team’s last six or seven games. It was a good play by the Ravens’ CB but that doesn’t matter to me. You have to understand the situation and ball security there is an absolute highest priority. Secondly, Was his fumble any more or less crucial than Jaylen Samuels’ interception? It’s like an NBA game. A foul on a guy who has a gimme lay-up in the first half isn’t a big deal. A foul on a guy with under a minute to go in a tight game is. Both were bad plays but JuJu’s will unfortunately be viewed as worse.

As of this writing I believe Devlin Hodges will get the start on Sunday in LA. There is zero reason to rush Rudolph back from this concussion especially with the BYE week on the other side. I thought “Duck” Hodges acquitted himself quite well yesterday. Consider this is a rookie who has never played in a meaningful NFL game before and just a month ago was a fourth-string QB. He deserves serious accolades for his preparedness and overall play.

Great to see Vince Williams back on the field… Mark Barron gave way to Tyler Matakevich yesterday apparently due to a hamstring injury. That may explain his total lack of effort on a few plays… I can’t get over the difference Minkah Fitzpatrick has made in the secondary. Don’t get me wrong, it’s not perfect but I haven’t seen nearly the missed assignments and blown coverages we saw before his arrival… Mike Tomlin’s decision to kick in overtime paid off. He trusted his defense would get a three and out and they did. He essentially bet on his defense rather than his rookie QB and it almost got him a win… The Chargers are a very beatable team. Despite Tomlin’s poor record on the West Coast I think they’ve got a chance.

Have a great day Steeler Nation. Better days ahead! 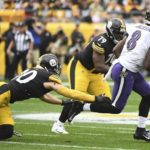 I am thinking a 5-11 record and let’s build towards one last run with Ben next year. Let’s get this defense working together and see exactly what we have everywhere on offense. I am not suggesting throwing games but rather game plan to see what we have. Give the starters some rest, practice rotating players, give the ball to Benny 15-20 times one game just to see what he has, maybe put Vanimal in a hyperbolic chamber for a year and see how he holds up with rest, see if Artie burns can play, Play Cam Sutton a bunch in a game. In short use this season to totally asses the team. BTW i totally agree with your take on the hit on Rudolph.

Thanks as always Bob. I have to believe if they lose next week and head into the bye at 1-5 there’s no reason not try some different things. That of course hinges a lot on whether some coaches believe they’ll be around in the near future too!