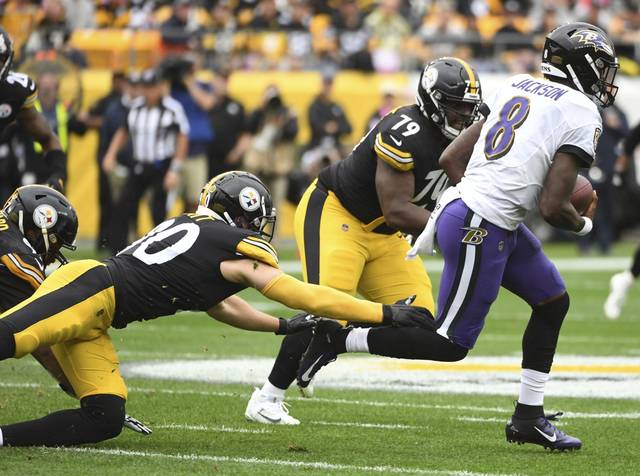 The oldest words in football… “Don’t Beat Yourself.”

The Pittsburgh Steelers again didn’t abide by that mantra as a late JuJu Smith-Schuster fumble led to a game-winning kick as the Baltimore Ravens defeated the Steelers 26-23 in overtime. The loss drops the Steelers to 1-4 on the season and perhaps more importantly they may be down to their third-string quarterback Devlin Hodges after Mason Rudolph was knocked unconscious in the third quarter. His status beyond having a concussion is currently unknown.

The game was marred by horrendous officiating that screwed both teams throughout but ultimately the Steelers were their own worst enemy. They found themselves down 10-0 in the first quarter after two mistakes on kick return and then a ridiculous interception thrown by Jaylen Samuels who was running the wildcat. To their credit, the Steelers battled back to eventually lead 23-20.

Had Rudolph not been injured, the discussion may again have centered on Randy Fichtner’s atrocious game planning. He was once again hesitant to let Rudolph throw downfield and when he finally did it led to an immediate score by Smith-Schuster. But the creativity Fichtner showed last week was not followed up. Instead he went with much of what we saw against the Bengals early in this game and the  Ravens weren’t having it. To Fichtner’s credit however, he called a very solid game once Hodges was forced into action.

The defense deserved better today. They recorded five sacks and three interceptions. Were they perfect? Absolutely not. But they made more than enough plays to come away with the victory and weren’t rewarded. Case in point was Mike Tomlin’s confident decision to defer in overtime. His decision paid off as the defense led a three and out. Unfortunately that led to Smith-Schuster’s fumble on the ensuing possession.

There are no moral victories in losses and I’m not going to try and spin this as such. It was a valiant effort by a number of guys but ultimately that means nothing. This team is 1-4 and going nowhere. Tomlin faces easily his most difficult challenge as the Steelers’ head man and we won’t know if he’s up to it until January. Today was a bitter pill to swallow as a fan of the Black and Gold and I’ll just leave it at that because I’ve seen this team beat itself far too much in recent years to say anything further… Without cursing.