Good Day to you Steelers’ Fans!

For all the discussion that has taken place about the Steelers possibly moving up in this draft for Devin Bush or Devin White, the discussion must be had about what the Steelers do should both no longer be an option. Most believe the idea of trading down is unlikely because when you do that, you typically gain picks. With the Steelers already having ten selections in this Draft, that seems remote. What we must do however is think like the Steelers’ War Room has to and that means planning for the next step while executing the current one. With all of those selections, I can see the Steelers spending some of that collateral to move up in the second and/or third rounds. While the ‘Devins’ are the cream of the linebacking crop, there are several other guys in the upper Day Two level. So perhaps you trade down, take another position of need like cornerback or tight end and then move up to grab one of those linebackers in the second. These decisions have to be made quickly. You can plan ahead for them all you’d like but as Mike Tyson once said, “Everyone has a plan until they punched in the face.” That’s true because there’s no telling how the Draft will play out. Teams could reach for quarterbacks or wide receivers thereby pushing other guys down the board. I don’t see Colbert and Co. taking a player at 20 “just to take a guy.” They’ll be much more diplomatic than that. Do I see a trade down? I’m going to put it at 35-65 that there won’t be a Steelers’ trade down in the first but then again there’s always a chance.

Tweet of the Day… The ‘Pay to Read’ World has added another veteran writer.

I am pleased to announce that I have joined The Athletic @TheAthleticPGH full time as Senior Writer with what has been my focus of coverage for the past 34 years – the Pittsburgh Steelers. https://t.co/TsfWRXjyE7

I don’t agree with everything Ed says any more than all of you agree with me all the time but this is a fairly big deal. He covered the Steelers for over three decades and has few contemporaries left to rival his memories and knowledge of the Steelers. I’m not a fan of ‘pay to read’ sites and I hope SCB never becomes one of them but I understand that this is the way journalism has evolved. Good luck to Ed in his new venture.

Last week we had to endure former Steelers’ running back Rashard Mendenhall calling Ben Roethlisberger a “racist” which most of us found to be completely ridiculous. Here’s another example that tears down Mendenhall’s stupid claim. One of Big Ben’s best friends and mentors is Bruce Arians, now coach of Tampa Bay. This week it was revealed that Arians will have by far the most diverse coaching staff in pro football. All three of his top coordinators are black as are many of his other assistants. He’s also hired two women to be assistants as well. I have a hard time seeing Roethlisberger having such a close friend and mentor as Arians and being a racist at the same time. 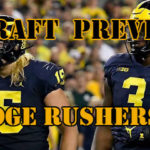