The nerd in me can’t resist this temptation every Spring. The National Football League announced that the official schedule will be made public on Wednesday evening. Therefore I get to put my knowledge of past Steelers’ schedules to use and also pull out my crystal ball in an attempt to see just how many of these I can get correct.

Week One: Cleveland 1pm -We kickoff against the Media Darlings.

Week Two: @San Francisco 4pm -Many thought this would be a game against Antonio Brown.

Week Four: @NY Jets 1pm -Get ready for nothing but Le’Veon Bell all week.

Week Five: BYE – I nailed the correct BYE week last year so I got that going for me!

Week Six: Seattle 425pm -The highest paid player in the league comes to the Burgh.

Week Nine: Indianapolis 1pm -Many have this team as favorites to go the Super Bowl.

Week Fourteen: @Cleveland 830pm (Thursday Night Football) -Will the real Browns have shown up by now?

Week Fifteen: Buffalo 1pm -Again, many thought this would be a matchup against Antonio Brown.

My Thinking: The Steelers usually get four to five primetime dates but I’m going to go with four this season as some of the ‘star power’ is gone and with Cleveland likely to get four also… In recent years, the Steelers have begun the season and finished the season against divisional opponents so I’m going to stick with that… The Steelers also seem to have a non-conference primetime game thrown into the mix that’s why I chose the Rams… We always seem to have Baltimore within the first few weeks of the season… We played the Browns in traditional 1pm games for so long it just seems this is the right time to suggest a primetime matchup is going to happen… New England? Late in the season? Just seems too easy although I know many are prepared to play there in the opener… Seattle could very well be a primetime game too… Miami, Buffalo and the Jets just have that ‘1pm feel’ to me… The team plays two times in the Pacific Time Zone and once in teh Mountain Time Zone (Arizona). All other games are in the Eastern Time Zone. 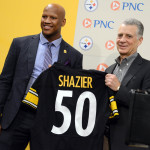 How Will the Steelers Proceed With Their...