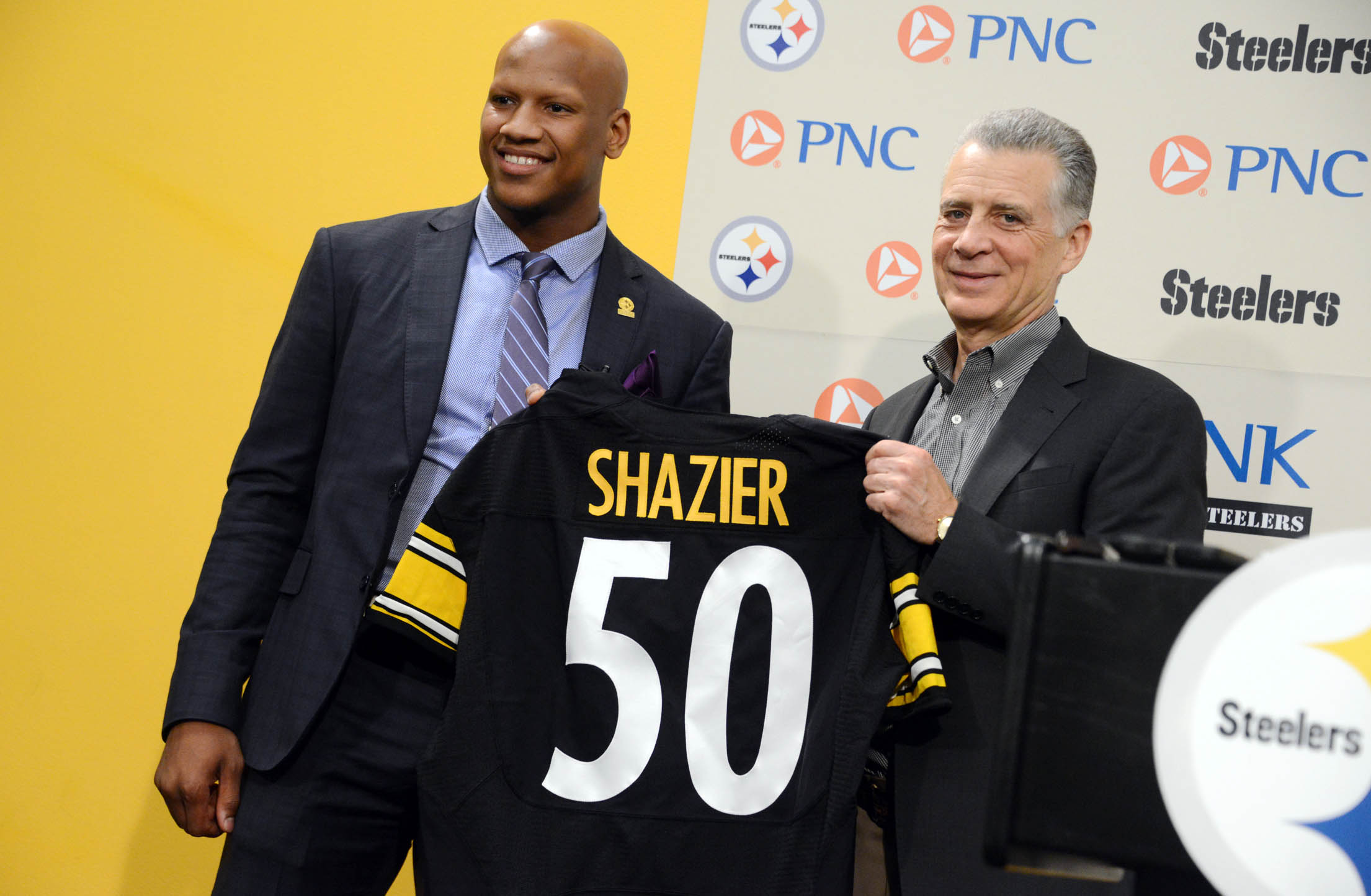 The Steelers draft class of 2013 was notoriously led by Jarvis Jones. Jones was a highly productive player in college but tested miserably at his Pro Day. Due to this, he fell to the Steelers at the 17th overall pick in the draft. After Jones struggles early in his career and the emergence of additional athletic metrics such as SPARQ, the Steelers scouting department underwent a massive philosophical change. Their 2014 draft class was headed by Ryan Shazier, a player no analyst had pegged to Pittsburgh, but was one of the top athletes in the class. 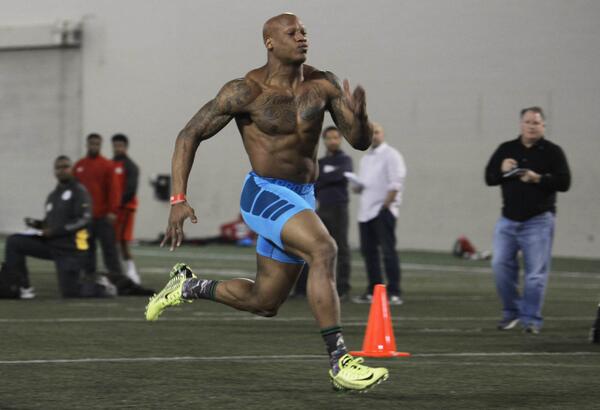 Around this time (2013-2014) was when SPARQ analysis (a measure of a prospect’s athleticism) started to take off. The process has been refined over time and other athletic metrics (such as “Relative Athletic Score“) have also entered into the public conversation. SPARQ scores are centered around the number 100, which signifies an average NFL athlete. While Jarvis Jones was well below average in 2013, Ryan Shazier scored an insane 152.2 on the SPARQ scale. In fact, all of the Steelers’ 2014 skill position picks were above-average athletes based on the SPARQ scale.

This trend has continued since 2014, signalling a clear change in scouting philosophy. Rather than selecting highly productive college players who may have been marginal athletes, the Steelers opted for exceptional athletes, regardless of their collegiate production. This philosophical change led to 2015’s selection of Bud Dupree who had a SPARQ score of 148.4 (the third-highest EDGE prospect that year). After Dupree, the Steelers next five 2015 selections were all above-average athletes: Senquez Golson (112.7), Sammie Coates (140.0), Doran Grant (125.0), Jesse James (121.7), and Anthony Chickillo (123.8).

In 2016 the Steelers surprised many prognosticators by using their first round pick on Artie Burns. Artie’s SPARQ score was 111.3, within the average range for cornerbacks. Second-round pick Sean Davis, on the other hand, was much higher on the scale at 134.6 (the 4th-highest CB of the class). The Steelers broke with their trend of taking unathletic defensive linemen by selecting Javon Hargrave (120.0). Sixth-round pick Travis Feeney had the second-highest SPARQ score among inside linebackers (behind only Ohio State’s Darron Lee). The only 2016 pick to be below-average on the SPARQ scale was offensive tackle Jerald Hawkins.

The 2017 Draft brought another edge rusher into the fold, this time Wisconsin’s TJ Watt who absolutely blew up the Combine. Watt has delivered on his athleticism (SPARQ 142.0) by producing 12.5 sacks in his second season. To further signal the Steelers’ change in philosophy in regards to selecting athletic pass rushers, 7th round pick Keion Adams was also well above average (124.9). Other above-average athletes in the 2017 class included JuJu Smith-Schuster (120.2), Cam Sutton (111.8), and fifth-round CB Brian Allen (137.8) who was the 6th-highest rated CB. James Conner, who was still recovering from his cancer diagnosis, still tested out above the 100-line. Once again, the Steelers draft class was loaded with above-average athletes.

Last year the Steelers pulled one of the biggest shockers of the first round in selecting Terrell Edmunds (who many “experts” had graded as a mid-round pick). However, Edmunds once again fit the trend as the second-highest ranked safety on the SPARQ charts with a score of 138.9. Fellow safety Marcus Allen was also above average at 121.7, the 23rd-best safety. Offensive skill players James Washington (119.5) and Jaylen Samuels (120.1) were both above-average athletes. The Steelers used two picks on linemen (Chuks Okorafor and Joshua Frazier) as well as one on a quarterback (Mason Rudolph), positions that typically do not grade out well from an athleticism standpoint. The Steelers also signed Florida State ILB Matthew Thomas, who graded as the most athletic inside linebacker, as an undrafted free agent. That said, adding highly athletic players was still clearly a preference as shown by the selections of Edmunds and Allen and the signing of Thomas.

The Steelers are clearly making a priority to stock their roster with elite athletic talent as much as possible. The priority has clearly shifted over the last five years away from productive college players to athletes than can be molded into NFL players. When looking at the 2019 Draft Class, it is important to keep athletic metrics in mind when considering the Steelers possible selections.

At inside linebacker, Devin Bush (144.0) and Devin White (138.5) are not only the top prospects but also graded as the most athletic. Other inside backers to keep an eye on are Minnesota’s Blake Cashman (138.9), Akron’s Ulysees Gilbert (135.6), and Washington’s Ben Burr-Kirven (132.7) who all ranked among the top 10 in SPARQ amongst inside linebackers. As discussed previously, the Steelers do have a preference for players under 23 years old, which may put a damper on Cashman’s stock as he is already 23. The other four listed, however, are all 21 years old and highly athletic which certainly puts them on the Steelers radar.

EDGE rushers have been another hot topic as Bud Dupree is playing on his 5th year option and is not under contract beyond this season. The top four of the group from an athletic standpoint are TCU’s Ben Banogu (144.9), Mississippi State’s Montez Sweat (144.8), Florida State’s Brian Burns (142.0), and Michigan’s Rashan Gary (141.7). Banogu and Sweat are both 23 years old while Burns and Gary are 21. Chase Winovich has been a popular name with Steelers fans and rates as the 12th-best EDGE prospect in the SPARQ metric. Due to an injury, Clemson’s Clelin Ferrell did not have enough testing data to produce a SPARQ score.

Other highly-athletic prospects that have been tied to the Steelers during the draft process include Cornerbacks David Long (Michigan), Sean Bunting (Central Michigan), Justin Layne (Michigan State) and Darnell Savage (Maryland). Interestingly, Georgia CB DeAndre Baker and Washington CB Byron Murphy tested out in the average range. LSU CB Greedy Williams did not have enough testing data to produce a score. On the offensive side of the ball, Iowa TEs Noah Fant and TJ Hockenson were the top SPARQ athletes at their position. Closley behind were LSU’s Foster Moreau and Notre Dame’s Alize’ Mack (both of whom the Steelers have scouted). At Wide Receiver, Notre Dame’s Miles Boykin was the highest-scorer with an incredible SPARQ score over 150. Ole Miss’ DK Metcalf, Iowa State’s Hakeem Butler, West Virgina’s Gary Jennings, Toledo’s Jon’Vea Johnson and Arizona State’s N’Keal Harry are all receivers the Steelers have scouted with above-average SPARQ scores.

In conclusion, historical trends show the Steelers are highly likely to target highly athletic players in the first round. Over the last 5 years the average SPARQ score of their first round picks was 138.6. However, only Artie Burns’ SPARQ actually fell below that average, signalling it as a clear outlier. If Burns’ score is removed, the average of the remaining players is an incredible 145.4. The Steelers have prioritized athletes at every position except the offensive and defensive lines. Expect this trend to continue in the 2019 Draft.

The Anatomy of a Steelers Draft Pick: Athleticism was last modified: April 10th, 2019 by Ian 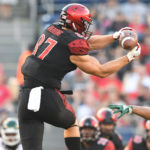