When sports were put on hold back in the days following the attacks of 9/11, I really hoped we’d never see anything like that again. Unfortunately my experienced brain new better but even this has been difficult to handle. For the first time in my lifetime and probably yours there will not be any sports. No hockey, no baseball, no NBA or March Madness… It truly is a surreal feeling that I really don’t want to have again. The most important thing here obviously isn’t my sadness of missing sports – it’s to make sure we all do our part to stay healthy and sane. Regardless of whether we think this has been completely overblown or whether we think it’s going to get much worse doesn’t matter. Decisions have been made and we’ll all do the best we can with the cards we’ve been dealt.

Latest on the Steelers’ Scouting

The NFL has already announced that the league meeting, scheduled for March 29 through April 1, has been postponed. Many teams are suspending travel which hurts their ability to attend college pro days. The Steelers were at Clemson yesterday and then arrived back in Pittsburgh. With more Pro Days on tap for this week it will be interesting to see who attends and where.

Derrick cranked out this profile of Ohio State Cornerback Jeff Okudah and here’s one from yours truly on Florida State RB Cam Akers.

Tweet of the Day… Kat is one of my favorites on Twitter. This is awesome and accurate.

If you've never said the Steelers need to bring back someone that's been retired at least a decade are you even a fan?

The Covid 19 virus has also claimed the new XFL as a victim. The season has been cancelled and players are now free to sign with NFL teams. I would not be surprised to see a player or two land in Pittsburgh. Who? I cannot say but I feel confident they’ll find a player or two.

One of the things I’ve had to personally check is discussing the Franchise Tag and potential free agents signings because I (we) just don’t know. Until the CBA is decided upon there’s no way of knowing what the Steelers may or may not do. Therefore, I’m putting myself on a quarantine of talking about these items.

Have a great weekend Steeler Nation and be safe out there! 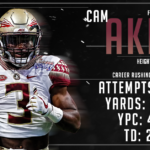 Breaking Down a Busy Day for the...