Stop me please if you have heard this before… “The Pittsburgh Steelers have re-structured the contract of (insert player here).” This is just what the Steelers do and yes, it’s kicking the can down the road. Sometimes it turns out to be a smart move and other times not so much. Either way, we’ve seen this before. Yesterday the Steelers re-worked Cameron Heyward’s contract. The Steelers converted a large amount of his base salary and roster bonus, around $10.5 million, into a signing bonus. This clears about $7 million in cap space. Kevin Colbert and company are pretty limited in terms of other players they can do this with. Stephon Tuitt and Derek Watt could be a couple of the options but at this point it’s difficult to say. Pittsburgh has every intention of making sure that Heyward retires a Steeler so this move isn’t surprising. Less surprising is their practice of doing this which many point to as a reason the team often finds itself in these right cap situations.

Tweet of the Day… Oh to be young again.

I couldn’t tell you what year this was, but my little boy is 15 now ?? pic.twitter.com/X2gQMC3LhQ

The Steelers announced yesterday that Head Coach Mike Tomlin has been battling COVID-19. He has been away from the facility and is reportedly feeling pretty well overall.

Pro Football Focus or PFF, is a website that analyzes each individual player and each individual play that said player partakes in every Sunday. Like life in general, there are times I agree and times I don’t when it comes to their assessments. Over the last few weeks, they’ve pushed the narrative that the Steelers should slap on the Franchise Tag on Alejandro Villanueva. They site his “best blocking score” among the Steelers’ starters and his lack of wear and tear due to picking up the position later than most. First of all, saying he’s the “best” among this past season’s Steelers’ starters isn’t saying much. Secondly, 33 years old and light tread is fair but let’s not forget this man wasn’t exactly on his couch prior to the NFL. The bottom line here is that you don’t franchise tag an aging offensive tackle who struggled last year. Struggled you say? Yes. Watch the film and you’ll see further proof as to why PFF grades are ridiculous. 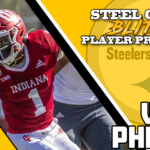