Every generation that grows older feels like the one coming after it is less and less respectful. There is some evidence to suggest this is true and some that says it’s not. Much of it has to do with the people we are around due to choice, circumstance, or necessity. I’ve never been a fan of Cam Newton. Wasn’t a fan when he was at Auburn and haven’t been a fan since he’s been in the NFL. That said, I respect anyone who has been able to do the things he’s done during his football career both on and off the field. This past week, a young man attending Newton’s football camp, decided to ‘have a go’ at Newton by referring to him as “free agent.” The viral video showed Newton responding by saying, “I’m rich.” The two went at it briefly before it moved along. First of all, this young man is insulting the host of the very camp he’s attending. Secondly, he’s now made a very negative name for himself if he’s trying to get recruited. And most importantly, he’s once again given fodder to the fact that new generations just don’t have respect for the one that came before them. I asked several people about this. Different ages, different ethnicity’s etc. They all made very clear to me one thing. This isn’t “smack talk or trash talk” that might go on during a contest. This was blatant disrespect. Newton posted to Instagram later on that he had a good conversation with the young man later and I hope that he did.

Is This the Week?

Don’t look now but we’ve entered the final week of February. That means we are that much closer to the start of the new league year on St. Patrick’s Day. The Pittsburgh Steelers have a lot to get done over the next three and a half weeks and I would be surprised if some of it didn’t start this week. While the decision on (or by) Ben Roethlisberger is the largest one looming over them, they’ve got other tough decisions. What about David DeCastro? In the final year of his deal, do you try to trade him or outright release him? He did not have a good year by his standards in 2020. What about Vince Williams? Also in the final year of his contract and 31 years old. Is there still a place for downhill linebacker in today’s game? Those are two of the things I’m watching for among many others.

I’ve heard rumblings, like many of you have, that Sam Darnold would be a good fit in Pittsburgh should Big Ben not be here. Let me share with you my concerns. In 3 seasons he has 39 INTs and 20 fumbles and has taken 98 sacks. Sure, a lot of that is on a poor O-Line and average running game but I’m not trading a second or third round pick for that. No way. 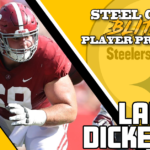