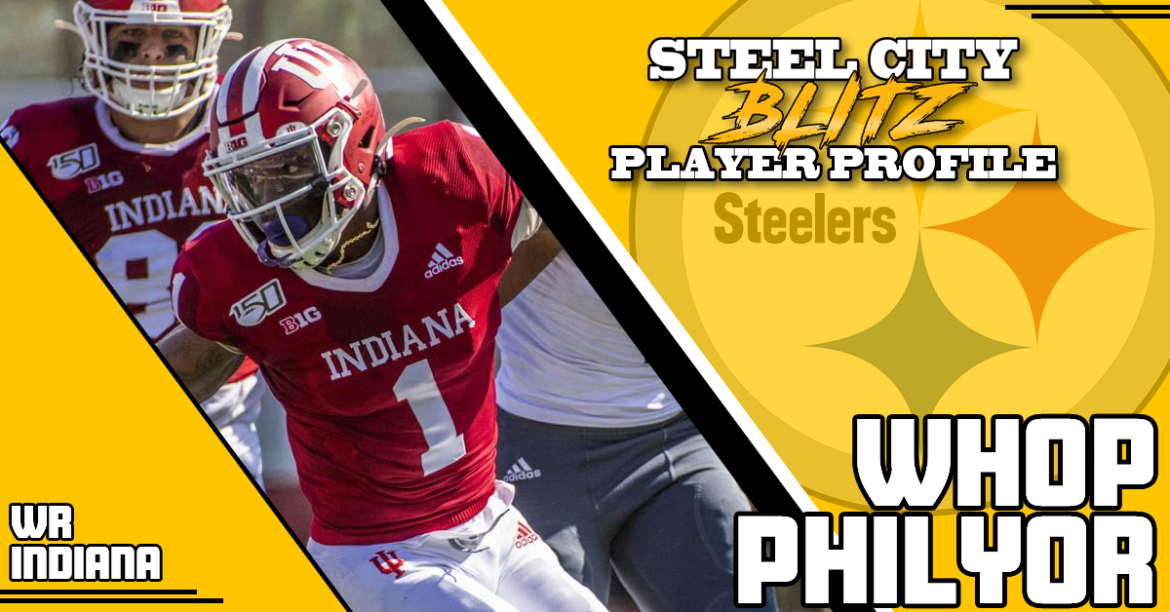 Today, we look at Indiana WR Whop Philyor, one of the most productive receivers in Hoosiers history.

“Whop” Philyor earned his nickname from his parents as a young man due to his love for Burger King’s Whoppers. That right there might be the best introductory sentence we’ve ever had for a draft profile. Whop came to Indiana from Florida where he played all over the field on offense and was named first-team All-State. He also competed in track in high school and his speed and explosiveness in short areas definitely translate onto the football field.

Whop was a consistent and reliable target for Indiana for all four years of his career. He finished 3rd on the team in receptions as a true freshman before injuries limited his availability in his sophomore season. Whop’s junior year was a breakout campaign with 70 catches for over 1000 yards and 5 TDs. He earned Second-Team All-Conference honors and was Indiana’s Most Outstanding Offensive Player. Due to the Big Ten starting the 2020 season late, Philyor didn’t have as many games as other players around the country but his 54 receptions were good enough to be the Big Ten’s leading receiver. In his career he recorded 7 games with double-digit receptions, proving to be a sure-handed option for Indiana’s sometimes-wayward QB play.

Whop Philyor is a solid route-runner and is especially adept at finding ways to get open. Whether it is sitting down against a zone or running crossing routes at varying levels of the defense, he displays an ability to find openings for the quarterback to get him the ball. It didn’t hurt that he was Indiana’s best playmaker and the Hoosiers would put the ball in his hands as often as they could. Playing primarily out of the slot, Philyor displayed a number of routes in the tree, including go and  fade routes. He has great lateral agility and explodes out of his cuts to create separation when running routes or to turn short passes into longer gains. He took a number of short outs and was able to turn them into bigger gains with a combination of quick cuts and an explosive first step. Philyor does a good job at snatching the ball away from his body and extending his arms to go get the ball rather than letting it get into his chest. He also displays solid balance, keeping his feet through contact.

At 5’11” and 180 pounds, Philyor is on the lighter side and can get blown up by big hitters. He was primarily used as a slot receiver by Indiana and that (along with his punt returning abilities) is certainly where his NFL future lies. NFL teams may not be willing to invest a high pick in a player that can only contribute from the slot. At times, he can overly rely on his agility and quick cuts and can get swarmed by defenders while dancing around. He doesn’t have the long speed to run away from defenders down the field and got caught from behind quite a few times. He is a willing blocker, but given his size he can get thrown to the ground by bigger defenders.

Indiana put together their best run in nearly two decades with back-to-back New Year’s Day bowl appearances. They lost by 1 to Tennessee in the 2019 Gator Bowl and by 6 to Ole Miss in the 2020 Outback Bowl. Whop Philyor was a big part of the offense that helped get them there. He is tough and reliable and has a very good sense for how to get open all over the field. Philyor ran a number of different routes out of the slot including crossing routes at different levels, slot fades, and short quick-breaking routes. While he doesn’t have the long speed to run away from defenders, he has the short-area quickness and sharp cut ability to be an effective slot receiver and punt returner in the NFL.  In all likelihood he will be a Day 3 selection and should be able to immediately start on special teams and contribute in certain pass packages as a slot receiver. 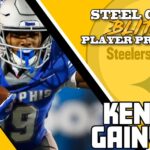