It has to be discussed. It’s the “what if” question the Pittsburgh Steelers could face on opening night of the 2021 NFL Draft. The question is this; What happens if one of those top five quarterbacks falls into range of the Steelers? Let’s go ahead and assume that Trevor Lawrence and Zach Wilson are gone. That leaves Justin Fields, Trey Lance and Mac Jones. Do the Steelers attempt to trade up and get one of those three if they are within 10 spots? To move up that far would be costly. In 2019, the Steelers moved from 20 to 10 to get Devin Bush. It cost them their first and second round picks in that year plus a 2020 third round selection. Therefore, you’re looking at a steeper price if the goal is a QB. So what would do? Would you make the move to get Fields? Lance? Or Jones? But… there’s always the possibility, however remote, that someone has an “Aaron Rodgers” type fall. I’m of the opinion that if Lance or Fields falls to 24 then you sprint to the Commissioner with your card. Jones is a guy I’m less confident with simply because of the athletic limitations. Going back to the trade up for a minute, I’m less likely to do it simply because this team has so many holes to fill and we need every pick. That said, when you get a chance at a potential franchise QB you have to take some risks. These are of course, hypotheticals and more often than not they don’t come to fruition. We should ignore the discussion though.

im never buying a jersey from you EVER again @nyjets pic.twitter.com/0MSdVVGcmc

It’s probably easy to summarize this by just saying “The Steelers wanted Steven Nelson to take a pay cut. He didn’t agree and was released” but like all things some context is required. First of all, there’s a reason fans don’t run NFL teams. Following a very solid 2019 season, Nelson regressed last year. That doesn’t mean he didn’t play well at times because he did, but on the whole, he wasn’t as good. Whether I agree or not, the Steelers felt that Cam Sutton could be just as effective at a lower cost. This tells me they saw something in Nelson’s game that left them a bit troubled. We must also recognize that Nelson is frustrated as his social media has indicated. Since betting on himself and losing, he remains on the open market. That’s a tough pill for any professional athlete to swallow and perhaps more so for a cornerback. They typically play with a chip on their shoulder as it is. This was a very unforeseen situation but it has happened. No use troubling ourselves over it now.

The Pressure is (Almost) On

The way things are going, I get the feeling the Steelers won’t draft an offensive tackle in the first round. This of course could change if one of the more coveted guys falls to them but everything I’m being told is that they may ride with Zach Banner and Chuks Okorafor. If that’s the case (and we won’t know until after the draft), then there is no player on the Steelers’ offense under more pressure than Okorafor. Banner will stay at right tackle and Okorafor would shift over to the left and replace Alejandro Villanueva. Every left tackle has the added pressure of being the blindside protector of the QB unless your QB is a southpaw. Whether Okorafor is up to the task is not known but let’s just say I don’t share the same confidence I’m hearing the Steelers have. 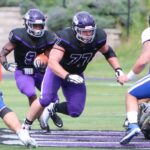