One week from tonight the NFL will kickoff its 101st season as the Super Bowl Champion Kansas City Chiefs take on the Houston Texans. Our Pittsburgh Steelers have a little more prep time with their game being the penultimate one of opening weekend on the 14th. Despite still having some time before the opener, it looks like the Steelers are already starting to get into their usual mode of preparing for an opponent. What this means is that players who will play will see more action in practice and those who won’t will see less. Keep in mind also that the roster isn’t yet complete. The Steelers must be down to their 53-man roster by 4pm on Saturday and with expanded Practice Squads, that may make things rather interesting. Be that as it may, we expect to see Ben Roethlisberger taking the bulk of the snaps at QB and I would assume the same for James Conner at running back as well. It’s all part of the process in this “anything but normal” football season.

We unveiled our annual roster projection yesterday afternoon and it’s right here for your reading enjoyment. There might be a couple of surprises if you look closely enough!

Tweet of the Day… I don’t think Big Snack would hate this at all!

As president of Steelers Nation Turkey, I declare today, Casey Hampton's birthday, a holiday. Feel free to do nothing but eat, drink and be merry. Carry on!

We’ll be recording the Steel City Blitz Steelers Podcast presented by DEK Roofing Inc later on this evening. Our major topics of conversation will be Part 2 of Big Ben’s video series and our roster projections for the 2020 season.

From the Training Table…

Chris Wormley was a ‘full participant’ for the first time yesterday. As long as this remains the status quo I think he’ll be good to go for the opener… David DeCastro is still struggling with his health and I think if that’s still the case a week from now it will be time to worry… Rookie Kevin Dotson was a full go yesterday and saw plenty of action with DeCastro out and Stefan Wisniewski not in pads… Mark Kaboly of The Athletic has been confirming what we’ve been saying all along in that Ryan Switzer will be on this roster. He goes a step further by saying he believes Switzer will handle the punt and kick return duties starting out as well.

The beat writers seem to be eating quite a drum for Marcus Allen, the former fifth rounder out of Penn State. He was drafted as a safety but with inside linebacker issues, the Steelers have been using him there more and more and not just in the ‘dime backer’ role. I have to say that I need to see this in action before I comment too much further on it. I was not impressed with his selection because his coverage skills were not NFL-caliber and I found his tackling to be very suspect. I’ll trust Mike Tomlin and Keith Butler until I can put eyes on this myself. 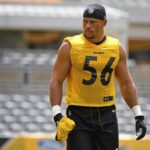