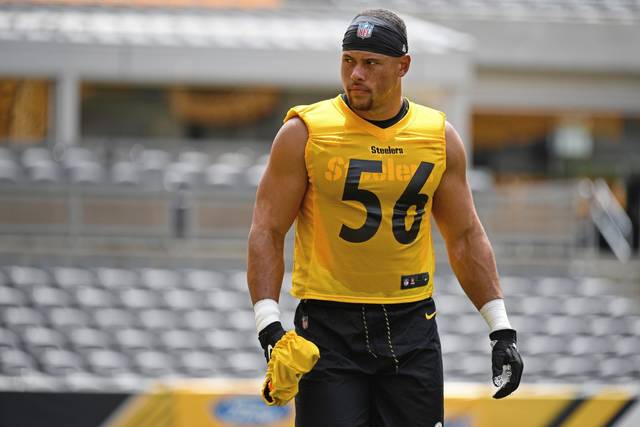 If you’re a rookie player looking to make a name for yourself in the NFL, developing the ability to act like a sponge can be praiseworthy indeed. In that regard, Alex Highsmith certainly appears to be making the right impression with his colleagues, as the Pittsburgh Steelers prepare for the season ahead.

Highsmith joined the Steelers as their third-round pick at the 2020 NFL Draft, and since joining up with the team in preseason, focus for the young linebacker has been aimed towards learning from everyone around him. This includes a keen desire to soak up all the experience and knowledge that Bud Dupree can share, which the five-season experienced 27-year-old admires and welcomes.

“Alex is ahead man, he’s doing real good,” Dupree observed with enthusiasm during a recent steelers.com virtual press conference, praising Highsmith as a “smart kid” who is “very athletic” and “moves well” during practice sessions. Dupree also praised the fact that Highsmith is “always eager to learn stuff, he’s always asking questions and trying to imitate stuff that we do, just to make sure he’s doing it correctly.”

'We’re just trying to add on to what we did last year, get better and better every day. Encouraging ourselves to just take that next step.' – @Bud_Dupree on what he and @_TJWatt can do in 2020

With more than a hint of admiration for his new colleague, Dupree noted that “he’s running to the ball well, he’s actually making plays on the field too,” noting that Highsmith came to the training camp “well prepared” to hit the right notes with his teammates and coaching staff.

'Alex is ahead. He is a smart kid, athletic. He is always asking questions. He is running to the ball well and making plays on the field. It's good to see how he came in prepared.' – @Bud_Dupree on @highsmith34

The Baltimore Ravens are -250 favorites to win AFC North this season, although according to the latest NFL odds on bet365, the Pittsburgh Steelers are next best priced at +375 to challenge for the division. Meanwhile, the Steelers are considered outsiders for the AFC Championship at +1100 and +2200 to win Super Bowl LV.

It goes without saying that to even harbor ambitions of making the playoffs, having missed out for the last two seasons running, the Steelers will need to rely on every ounce of strength and depth on the roster. Highsmith might be in his rookie season with the team, yet that doesn’t mean he won’t be pushing hard for valuable experience and minutes involved in the action.

Hailing originally from Wilmington in North Carolina, the trajectory of Highsmith during his college years was very promising. Despite being a redshirt freshman, he played in  all 12 games of the 2016 NCAA regular season with the Charlotte 49ers, then 11 during the 2017 campaign. From there he blossomed into a powerful linebacker who made constant progress.

Highsmith set a new school record in 2018 with 17.5 tackles for loss and 60 total tackles, along with three sacks and two forced fumbles, earning him a spot in the All-Conference USA first team. In 2019 he continued to break school records, this time with 14 sacks and 21.5 tackles for loss, again making the All-Conference USA first team and the third team All-America selection.

While the future of Dupree hands in the balance, with this season likely to be his last with the Steelers before departing via free agency, Highsmith has two great opportunities before him right now. The first is to learn from one of the best linebackers in the NFL, while the second is the chance to put himself in the frame as long-term replacement.