ESPN’s Marcus Spears said this week that he believes the Steelers should sit James Conner as soon as Le’Veon Bell returns. That’s nonsense for a couple of reasons. First of all, if Conner is still producing at an above average rate and the team is winning you don’t dare mess with that. Secondly, why does Spears think Bell would show up and play at a high standard? He didn’t last year as it took three weeks for him to get up to “football speed.” Spears does a nice job from what I’ve gathered the few times I’ve seen him but this take isn’t well-thought and strikes me as the TV equivalent of ‘clickbait.’

Furthermore, these suggestions that Conner and Bell could split time in the backfield are hilarious. When is the last time a Mike Tomlin team has featured anything other than one back? And I’m not talking about offensive sets. Tomlin has traditionally used one feature back. From Willie Parker to Rashard Mendenhall to Bell. I don’t see that changing much. That doesn’t mean you won’t see some sets with both of them on the field but let’s cross the bridge when we get to it.

Today, Ben announced the third grant award of the 2018 #NFL season from the #BenRoethlisbergerFoundation at @givingbackfund to the #VillaHillsPoliceDepartment: https://t.co/4UmF4qlQ7f. Also want to extend a BIG THANK YOU to @Sarris_Candies for the continued support! pic.twitter.com/CpBIFyID97

This is a really premature take on my part but I’m going to go here anyway. If T.J. Watt can continue his strong play there’s no reason he can’t be a Pro Bowl player.

Comments: Burnett and Fort both look like they’re out on Sunday as well as DHB (I never thought I’d say this but if his holds true the loss of Fort is more significant than that if Burnett). Foster out due to a coaches decision bears watching. If he can’t go B.J. Finney jumps in.

Comments: Cincy is already thin at TE so keep an eye on Kroft. Billy Price not being available would hurt the interior of their offensive line.

This is pretty funny. JuJu Smith-Schuster is looking for advice now that he’s the new father of a new baby ‘football.’ 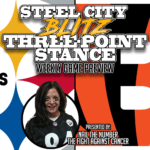