There have been rumblings for a couple of weeks now that the Pittsburgh Steelers may be going in a direction few saw coming when it comes to who the answer is at nickel. The first thought was that maybe Cam Sutton would slide inside from the boundary but that never seemed realistic considering how often teams use three wide receiver sets. Sutton would in effect be in the slot more than on the boundary. What about James Pierre? Justin Layne or rookie free agent Shakur Brown? It appears through the first week of camp that it’s none of those. Instead, Antoine Brooks has been getting the most action there. At first thought, Brooks probably doesn’t seem like a guy that would fit the role but let’s consider he was among other rookies who never got a chance at a real training camp and preseason due to the pandemic. While I don’t view the depth chart released by the Steelers as gospel, it is worth mentioning he was listed as the starter at nickel. I have to think this will be one of the more interesting battles throughout the preseason. If Brooks shows he can cover, tackle in space and occasionally rush the passer then perhaps his drafting one 2020 becomes a real coup.

Tweet of the Day… Melvin Ingram rocking the number 8!

Since we are talking about Brooks, several outlets reported that he left the field yesterday with an injury. It was not thought to be serious… Center JC Hassenauer also left with an injury. Mike Tomlin said both were “day-to-day…” Obviously there’s a lot of time between now and the end of the preseason but I’m still staying with Alex Highsmith starting opposite T.J. Watt. Everyone seems to quickly want to anoint Melvin Ingram as the starter but I think Highsmith deserves the chance and Ingram may be better suited to a role where he can give both guys a rest while not draining his own tank… One name to keep an eye on is running back Kalen Ballage. People often forget he signed with the Steelers in the off-season. I don’t believe he’s lived up to the expectations that many has for him when he came out of Arizona State but he’s got some experience and could be a more than capable reserve. I had some thoughts over the weekend on the initial depth chart which is always something that gets fans going.

Allow me to stray from football for one second to discuss the Olympics. There are two reasons why the USA Basketball Team is struggling. One, the rest of the world has gotten better just as they did in 1988 forcing us to create the “Dream Team.” They play a more complete game than we do in the US and it’s showing. Secondly, do the Olympics really matter to these guys? I honestly don’t think they do as much as maybe they once did. A thought on Simone Biles… If you had a chance to watch her on Sunday night you know that she wasn’t her typical, flawless self. She had several missteps during the competition. Afterward, she posted to social media that the pressure on her shoulders is immense. She is the entire face of the Olympic Team and she’s right to feel burdened by it. It’s a good lesson for all of us that even the greatest performers of our generation can struggle with pressure.

Lost in the Wash?

The deepest position on the Steelers’ roster is wide receiver and the one guy often lost in the discussion is James Washington. Were he on any other roster, he’d likely be a number two or number three receiver. There are those that suggest he could be a number one receiver but I disagree with that. To me he doesn’t possess the overall skillset to be a number one but that doesn’t take away from what he brings to the table. Entering the final year of his contract, it’s going to be really intriguing to see how he plays and then what the Steelers do with him down the road. 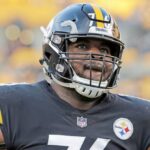 SCB Steelers Quick Hitters: The “Back to Heinz” Edition

We Should All Find the Steelers’ Lack...