I once had a friend in the Cincinnati area who told me that Bengals’ fans hated late-season home games against the Steelers. The explanation isn’t difficult to figure out. When the Steelers come to the Queen City later in the season it usually means they come with a good deal of the Steeler Nation with them. There’s not much worse than seeing a rival come into your stadium, win almost regularly and do it in front of a crowd that supporting them as much as much as you. Thus the name of Paul Brown Stadium in these parts is “Heinz Field West.” Since 2000, the Steelers own a 28-9 advantage over the Bengals. In Cincinnati, the Steelers are 16-3 in that same span. The lesson here is that as Steelers’ fans we should never take this trip for granted. It’s still the NFL after all where “any given Sunday” still applies.

While I credit Kevin Colbert with going out and getting McDonald, he’s been a disappointment. He’s had as many drops as big plays and he’s been injured for much of the season. Mike Mitchell not practicing isn’t good either. His lack of practice time has been a major reason while the secondary has struggled especially with communication.

It is expected that Martavis Bryant will continue to return kicks from here on out.

PLEASE STOP TALKING ABOUT THE PATRIOTS.

Antonio Brown was not at practice today and we are making efforts at the current time to find out why. 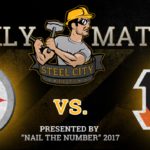